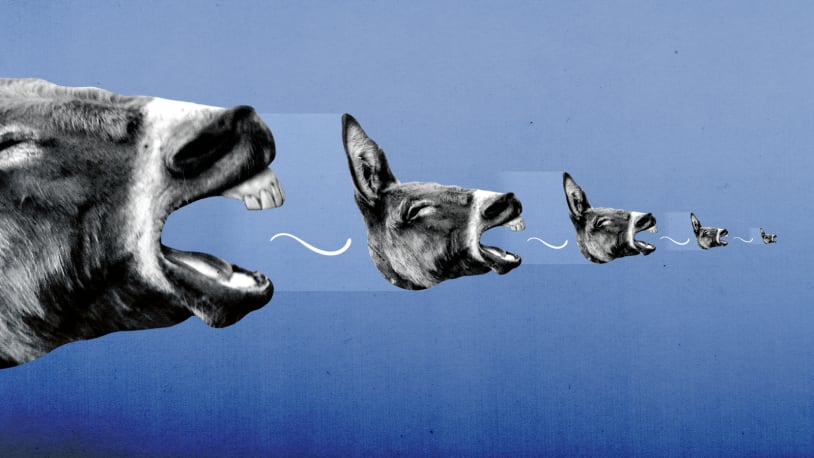 Against leftist perfectionism in 2022

One year ago, Democrats were ascendant. They’d won the presidency, the House, and — by virtue a tie-breaking vote from Vice President Kamala Harris — the Senate, opening the way, many thought, for a New Deal 2.0. The centrist Democratic Party establishment, the party’s progressive wing, and voting rights advocates alike seemed on the brink of accomplishing some of their most cherished goals.

And then reality hit. A signature element of President Biden’s agenda, the Build Back Better bill, got stuck in the Senate logjam. COVID cases and inflation surged, and Biden’s approval rating sank to an alarmingly low 33 percent. In response, some disillusioned progressives and voting rights activists are now threatening to jump ship from the coalition that elected that unified Democratic government in 2020.

Some are even talking openly about running a progressive primary challenger against the president in 2024. Corbin Trent, the former communications director for Rep. Alexandria Ocasio-Cortez (D-N.Y.), was unusually blunt in remarks to the press earlier this month. Biden is “deeply unpopular,” Trent groused. “He’s old as s–t. He’s largely been ineffective, unless we’re counting judges or whatever the hell inside-baseball scorecard we’re using. And I think he’ll probably get demolished in the midterms. People will smell opportunity, and D.C. is filled with people who want to be president.”

Normally, few would care about such intraparty squabbling, but these aren’t normal times. The growing threat from loyalists to former President Donald Trump — which is to say, the bulk of the elected Republican Party — to basic democratic institutions demands an all-hands-on-deck unity among Democrats and any willing to work with them to put the needs of the country first. If the left can partner with that coalition, they may get much of what they want in the long run. If some refuse, though, everybody loses.

In that context, Biden’s full-throated defense of voting rights in Atlanta last Tuesday came just in time. Decrying attempts to overturn the results of the 2020 election and continuing election subversion, he urged the passage of the two voting rights bills languishing in the Senate and even hinted at support for abolishing the filibuster (a plan his fellow Democrat, Sen. Kyrsten Sinema of Arizona, will likely still preclude.)

By putting out the call for voting rights reform in a place sacred to the historic civil rights movement, Biden created an opportunity the whole Democratic coalition would be wise to use fully. Yes, this speech came probably about six months late. Yes, Biden has probably spent too much time on his failed legislative agenda. Yes, voting rights activists have reason to be skeptical until Biden adds deeds to words.

Still, the opportunity is real — and needed, as two factions of the liberal coalition stand scowling at the Democratic Party establishment. Democratic pollster Cornell Belcher’s take on Biden’s speech clearly defines what’s at stake: “Hopefully, what you’ll see starting today and moving forward is the White House and the entire Democratic apparatus moving and fighting for the number one issue for Black voters right now. If they do that, I think they better position themselves for the midterms. If they don’t do that, they’re screwed.”

Indeed they are. Consider the dozens of voter roadblocks erected by Republican-controlled state legislatures. And the growing number of Trumpist state election officials willing to subvert unsatisfactory election results. And the radical gerrymandering of voting districts that deliberately disenfranchises liberal voters. There will be more of this if Democrats flame out.

To avoid such steps toward authoritarianism, progressives and voting rights advocates must be persuaded to make common cause with the centrist establishment. Admittedly, no amount of finger-wagging from outsiders like me will convince them. Their grievances and frustrations with the party are real and legitimate, after all, and should’t be ignored. But they could reframe their disappointment with the pace and character of change in the Democratic Party to give themselves permission to do what has to be done.

One reframe might be inspired by the famous (and likely apocryphal) quote attributed Mahatma Gandhi: “Be the change you want to see in the world.” What if instead of waiting for the White House to move in their direction, voting rights organizations offered themselves as the chief action arm of the Biden administration’s efforts? Pressure in the streets, plus arm-twisting in the hallowed halls, plus the power and platform of the bully pulpit might together be enough to put voting rights over the top.

Rep. Cori Bush (D-Mo.) and Sen. Ed Markey (D-Mass.), who held a townhall meeting this past Thursday to call for the abolition of the filibuster and the passage of the voting rights bills, are already taking steps in this direction, as are activists like Martin Luther King III and the organizers of a march for voting rights in Washington, D.C., on Martin Luther King Jr. Day. This is good, but there needs to be more of this. A lot more.

Almost as important as passing voting rights legislation is the outcome of the midterm elections, and this is where progressive collaboration with Democratic centrists could prove most helpful. Progressive campaign organizing resources would be a powerful force multiplier for Democratic candidates. Being true believers, progressives make effective foot soldiers, if nothing else.

But the defeatist, divisive talk so common in progressive circles threatens to blunt the effectiveness of this organizing power. It depresses turnout among progressive voters, who are already less likely than many demographics to vote in midterm races. To secure democracy and Democratic governance alike, progressives will need to tone down this rhetoric in 2022.

That doesn’t mean throwing away progressive idealism for mushy centrism. It means an attitude modeled on that of perennial voting rights activist Stacey Abrams. “I don’t talk about hope,” she said in an interview this past fall. “I believe in being determined. Hope feels good, but I’m not optimistic or pessimistic. I am determined.”

Determination is exactly what the whole Democratic coalition needs right now. The long-term solution to every problem the left faces in America is just what Sen. Joe Manchin (D-W.Va.) keeps suggesting: Elect more liberals to Congress. Annoying though it may be to hear that advice from him, it’s true. And it’s time for the left to get to work.

January 16, 2022 January 16, 2022 One year ago, Democrats were ascendant. They’d won the presidency, the House, and — by virtue a tie-breaking vote from Vice President Kamala Harris — the Senate, opening the way, many thought, for a New Deal 2.0. The centrist Democratic Party establishment, the party’s progressive wing, and voting rights advocates alike seemed on…

January 16, 2022 January 16, 2022 One year ago, Democrats were ascendant. They’d won the presidency, the House, and — by virtue a tie-breaking vote from Vice President Kamala Harris — the Senate, opening the way, many thought, for a New Deal 2.0. The centrist Democratic Party establishment, the party’s progressive wing, and voting rights advocates alike seemed on…

Glenn Youngkin sworn in as governor of Virginia