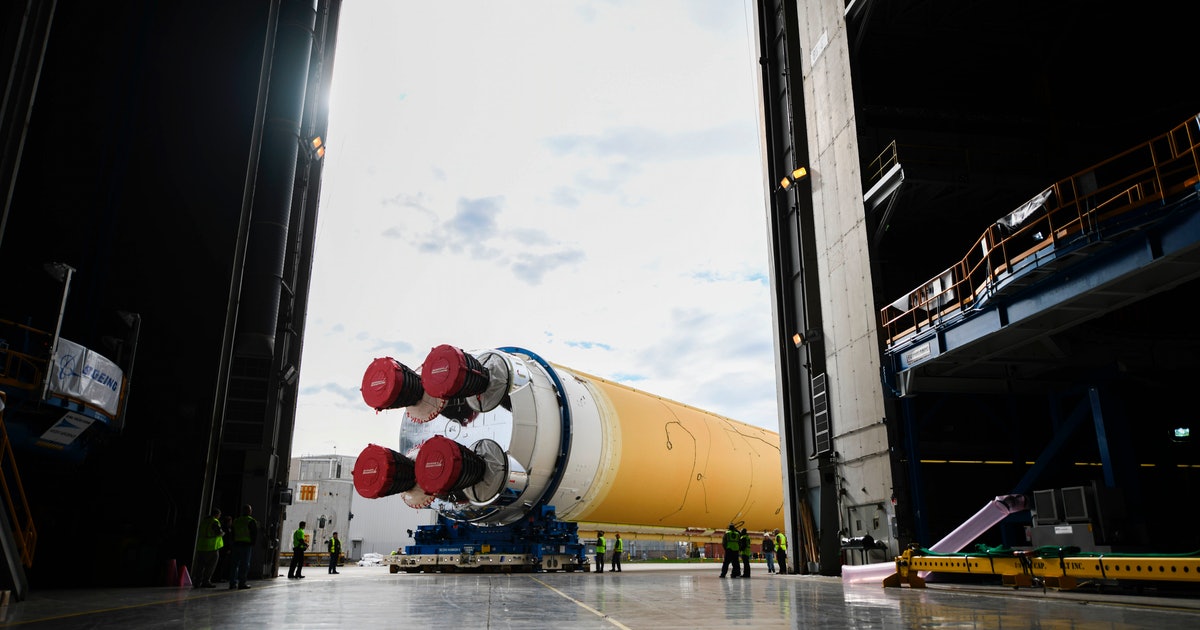 11 space missions and projects to look forward to

NASA had a big 2021. The space agency landed the Perseverance rover on Mars and made the first powered, controlled flight on another planet with the associated Ingenuity helicopter. It launched the Lucy mission to explore the asteroid belt and saw the OSIRIS-REx spacecraft begin its journey home with an asteroid sample.

And of course, there was the long-awaited launch of the James Webb Space Telescope to close out the year on December 25.

But many of NASA’s 2021 accomplishments will carry over into 2022, and of course, there are some pretty big missions scheduled to finally get going this year as well, not least of which being NASA’s new Moon program, Artemis. Here’s the Inverse guide to NASA’s 11 biggest projects in 2022.

The first uncrewed test flight of the combined launch system and spacecraft NASA hopes will return astronauts to the Moon is currently scheduled for March or April of 2022. Consisting of NASA’s Space Launch System (SLS) heavy rocket and the Orion spacecraft, Artemis 1 will make multiple close passes by the Moon during a four-to-six-week mission in preparation for Artemis II, a crewed flyby currently scheduled for May 2024.

NASA originally scheduled the Artemis 1 launch for February 12, but testing issues with the SLS led the agency to delay the mission in December. The space agency now plans to perform a “wet dress rehearsal,” a non-launch test of the SLS field on the launch pad at Cape Canaveral, sometime in late February.

SpaceX has been flying astronauts to the International Space Station as part of NASA’s Commercial Crew Program since November 2020, but Boeing’s Commercial Crew contract-winning spacecraft, the Starliner, has been delayed following a computer error during its first uncrewed orbital test flight in 2019.

Boeing’s second attempt at a successful, uncrewed orbital test flight is now scheduled for launch sometime in May. If all goes well, the first crewed test flight of Starliner will take NASA astronauts Mike Fincke, Nicole Mann, and Barry Wilmore to the ISS sometime later in 2022.

The Psyche mission is interesting in that it will send a spacecraft to an asteroid 280 million miles from the Sun to better understand what lies 1,800 miles beneath our feet. A unique, heavily metallic asteroid about 173 miles in diameter located in the asteroid belt between Mars and Jupiter, 16 Psyche appears similar to the cores of rocky planets. Getting up close and personal could give scientists a better understanding of planet formation in the solar system.

Psyche the spacecraft is currently scheduled to launch atop a SpaceX Falcon Heavy rocket on August 1 and will enter orbit around 16 Psyche in January 2026.

The long-awaited flagship space telescope finally launched on Christmas Day 2021. It will arrive in its operational orbit around Lagrangian point 2 in late January, but there are still months of work to be done before Webb can begin performing scientific observations. Calibration and testing of the telescope’s optics and instruments will take months, but if all goes well, Webb will finally start peering deeper into the cosmos than ever before by the end of the summer.

NASA’s Double Asteroid Redirection Test (DART) will slam into the asteroid Dimorphos on October 2. A part of NASA’s Planetary Defense Initiative, DART is designed to study the use of kinetic impact to redirect hazardous asteroids before they could strike the Earth.

The spacecraft Juno has been exploring Jupiter and the Jovian moons since 2016, and 2022 will see the spacecraft make two close passes by Jupiter’s moon Europa.

Juno will swing within 29,000 miles of Europa in late February but will make an extremely close pass within 221 miles in late September, yielding close-up images of the large icy Moon. Planetary scientists believe Europa hosts a global liquid water ocean beneath its surface, making it a prime candidate for finding alien life within the Solar System. It also may have geysers rising from underneath its ice crust.

Of course, it’s not like new projects and launches are all NASA has going on in 2022. The space agency has plenty of existing, ongoing, or even lingering missions that are still doing exciting science.

Originally scheduled for a two-year mission beginning in 2018, NASA extended Transiting Exoplanet Survey Satellite’s mission in July 2020. TESS will continue hunting for and characterizing exoplanets in 2022, potentially uncovering more weird and unexpected worlds like the recently announced TOI-2337 b, a hot Jupiter locked in a deadly spiral with its Red Giant host star.

4. The Hubble Space Telescope and the Chandra X-Ray Observatory

If you’re reading this, Hubble likely needs no introduction. The venerable space telescope, launched in 1990, has made immense contributions to astronomy and provided intensely cool color images of the cosmos. It’s managed to survive multiple computer glitches in 2021, but so far, Hubble looks like it has life in it yet.

NASA launched the Chandra observatory in 1999, and it has been key to better understanding the physics of black holes, the swirling disks of matter around their maws being sources of high-energy X-rays. It will continue to serve as astronomers’ best X-ray eyes in the sky throughout 2022.

February will mark the first anniversary of NASA’s latest Mars rover, and Perseverance will more than persevere through 2022. Ingenuity will scout ahead and help Perseverance as it continues to explore the Jezero Crater and extract rock and regolith samples for a later sample return mission to Earth.

And on the topic of Mars rovers, don’t forget NASA’s Curiosity Rover, which initially touched down on the Red Planet in August 2012, is still operational and will continue exploring Gale Crater through 2022.

Gaia is a European Space Agency observatory, but the data it collects could have a significant impact on NASA projects such as the James Webb Space Telescope. Gaia is surveying the entire sky in an attempt to construct a detailed, three-dimensional map of billions of celestial objects, including many Jupiter-sized exoplanets. The third drop of Gaia data is expected in early 2022 and could provide new targets for Webb to follow up on.

Last but by no means least, the longest flying, continually crewed NASA and international spacecraft is still flying around the planet in 2022. Although NASA has awarded contracts to multiple companies to develop private, commercial space stations to replace the ISS, the now 23-year-old space station will keep flying until at least 2028, if not 2030, before any successors are ready to take its place.

NASA had a big 2021. The space agency landed the Perseverance rover on Mars and made the first powered, controlled flight on another planet with the associated Ingenuity helicopter. It launched the Lucy mission to explore the asteroid belt and saw the OSIRIS-REx spacecraft begin its journey home with an asteroid sample. And of course,…

NASA had a big 2021. The space agency landed the Perseverance rover on Mars and made the first powered, controlled flight on another planet with the associated Ingenuity helicopter. It launched the Lucy mission to explore the asteroid belt and saw the OSIRIS-REx spacecraft begin its journey home with an asteroid sample. And of course,…

What exercises improve anxiety? Why the answer is unexpectedly simple

11 adorable pieces of 'Genshin Impact' merch from Razer and more