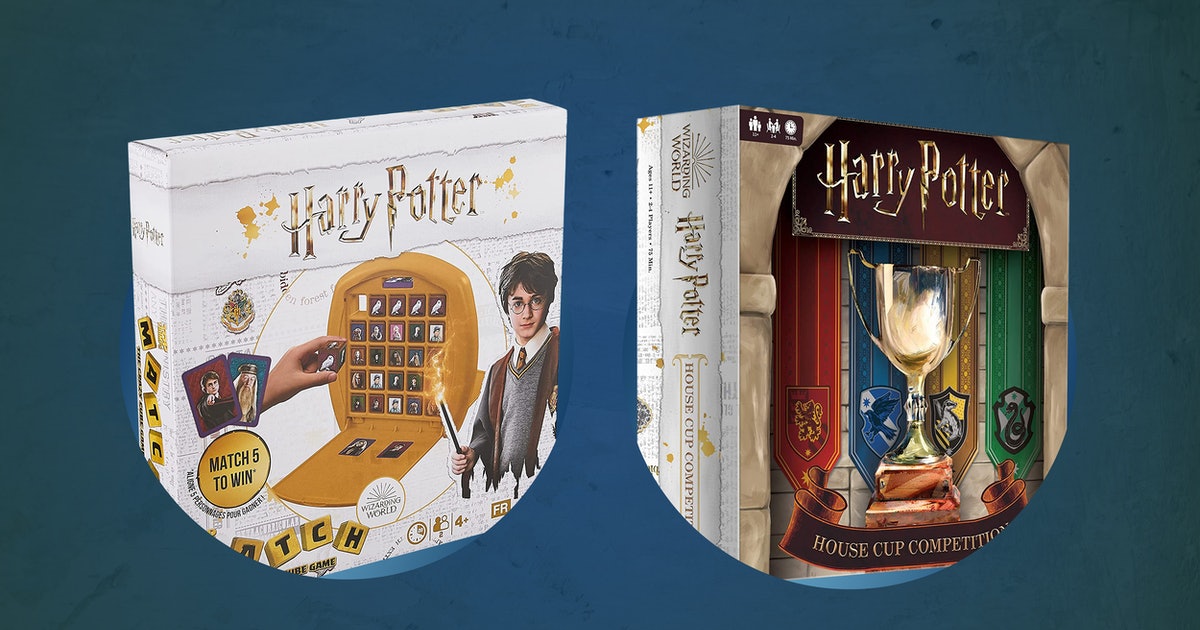 The 10 best Harry Potter board games

Unlike Harry Potter, most people need to find the perfect balance between sleight of hand and human expectations to perform magic. Luckily, there are plenty of ways to apparate to the world of Harry Potter without learning any magic tricks, including some very entertaining board games. The best Harry Potter board games can be replayed many times, challenge the player’s age group, and utilize a dash of wizarding magic in a creative way.

Some Harry Potter-themed board games are editions of games you may already know and love, such as Clue and Trivial Pursuit, while others are brand-new additions to your game night. For example, a game inspired by the House Cup competition that lets you play as your favorite Hogwarts House and one that tests your strategic skills using characters’ magical abilities. Below, you can choose between quick and easy games or ones geared towards superfans who can explain the Trace and remember Krum’s first name (it’s Viktor, by the way), including ones that both kids and adults will enjoy.

Whether you’re looking to transform your game collection or just add a dash of magic, scroll on for my picks of the best Harry Potter board games on Amazon — no summoning spell required.

1. A Harry Potter edition of Clue

The Clue: Wizarding World Harry Potter edition game puts a magical twist on a timeless classic. You can play as your favorite characters, including Harry, Ron, and Hermione, as you move around the board to solve the mystery. For a unique HP twist, players can move the wheels on each corner of the game board to reveal changing staircases, secret passages, get directed to different rooms around the board, and more. This is a great addition to family game night or any Harry Potter-themed party.

According to a reviewer: “This Harry Potter Clue is so much fun. The doors lock and unlock, you never know if you’re going to be able to get in or out of a room. There are also dark cards that will cost you house points unless you have a certain spell or ally card. This is a definite hit in our family!”

The Codenames game has quickly become a modern classic, and this Harry Potter edition replaces the “secret agents” with HP characters, locations, and more. This cooperative game for two or more players allows teammates to help complete the missions and win the game together. The gameplay time is about 15 minutes per round, and the 200 unique code cards allow you to replay the game lots of times.

According to a reviewer: “This game is so fun! It can be learned and played by all ages and the difficulty of the clues and the complexity in which it’s played depends on the players! When I play with my three and six year olds, it’s one level of difficulty, but when I play with my twelve year old and my adult friends, it gets much more competitive and complicated!”

This Funkoverse board game uses Funko Pop! styled player tokens for an easy-to-learn strategy game. You can play as Harry, Hermione, Bellatrix Lestrange, or even the Dark Lord Voldemort himself, using each character’s magical abilities to gain points. The double-sided game board lets you play in Diagon Alley or the Room of Requirement. And best of all, it pairs with other Funkoverse games to create epic crossovers with your other favorite Pop! characters.

According to a reviewer: “Yes the characters are cute and the toy factor is off the charts, but the game behind this is absolutely solid. Every set comes with a two-sided map, which makes the replayability insanely high.”

In this House Cup competition game, players representing Gryffindor, Slytherin, Ravenclaw, and Hufflepuff earn points and complete challenges to see which Hogwarts House will be victorious (Go Team Hufflepuff!). It’s designed for two to four players, and many of your favorite characters, including Harry Potter, Cho Chang, Cedric Diggory, and Draco Malfoy, are included in the gameplay. This is an in-depth strategy game that may take some time to master but is a hit with HP fans looking for a challenge.

According to a reviewer: “This game is a lot of fun! If you’re a Harry Potter fan you’ll like it. The only thing, it’s a little difficult to learn but once you get the hang of it it’s super easy! My family and I love to play this game.”

5. The easy-to-learn family board game

The Back to Hogwarts board game is a Snakes and Ladders-style option that’s fun for ages 6 and up. Two to four players attempt to get from Platform 9 3/4 to Hogwarts by moving illustrated character tokens of Harry, Hermione, Ron, or Ginny around the board. You advance across the board using a spinner that lets you move between one and six spaces — but if you encounter a villain, you’ll have to go backward.

According to a reviewer: “This has Harry Potter appeal and makes a refreshing change to children using screens and online games. This gets all the family involved and is sure to be a hit with younger children. It would make a good Christmas or birthday present.”

6. The guessing game that tests your HP knowledge

While not technically a board game, the Harry Potter-inspired edition of HedBanz is a game that’s backed by a 4.8-star overall rating after more than 1,7000 Amazon reviews, and it will definitely put your Harry Potter knowledge to the test. Each player wears a headband that can hold one of 72 different cards featuring tons of different characters and creatures from the Wizarding World. Each player takes turns asking yes or no questions to help them guess the card they’re wearing. This easy-to-learn game is highly replayable, and it’s fun for Harry Potter fans ages 7 and up.

According to a reviewer: “For all Harry Potter fans, this is so much fun. It’s a lot harder than you’d think. The cards aren’t only obvious details from the books and movies. Warning: Muggles who are not obsessed with HP will find it impossible to play!”

Fun for ages 4 and up, this Harry Potter matching board game is one that even younger fans will enjoy. All you have to do is match five characters vertically, horizontally, or diagonally across the board before your opponent, and the game features favorites such as Dumbledore, Hagrid, and Ron. This game also travels well since everything can be stored neatly in the game board carrying case. A Fantastic Beasts edition of this game is also available.

According to a reviewer: “My whole family loves Harry Potter, so this is a fun game we like to play often – kids and adults. It’s very similar to Connect Four, so if you like that game and like Harry Potter, you’ll love this!”

8. This Harry Potter and the Sorcerer’s Stone chess set replica

Appearing in the final scenes of Harry Potter and the Sorcerer’s Stone, the moving, larger-than-life chess game was a big hit with fans — and now you can bring home your own replica chessboard from the movie. The game pieces are plastic, lightweight, and very detailed. Each set of pieces can be stored in their own matching colored pouch so you can set up your next chess battle with ease.

According to a reviewer: “The pieces are spot on to the movie, very good quality, and the weight and height are perfect. Obviously bigger than normal chess pieces, but overall perfect for the HP world. Hands down I would recommend this set to any HP fan.”

9. The picture trivia game with 1,000 questions

This Harry Potter trivia game has players wager on whether they’ll be able to answer the next question based on just a picture clue. The game includes 1,000 questions from each of the Harry Potter books and movies, as well as the Fantastic Beasts series. With easy-to-learn gameplay instructions, this game is a good addition to family game night for ages 7 and up.

According to a reviewer: “We are a Harry Potter loving family and have been since the first book was released. Now, my daughters are adults and we love playing this for family game night! The questions are challenging enough for HP fans, but engaging enough for those of limited HP knowledge.”

10. This travel version of a classic trivia game

This compact and portable Harry Potter edition of Trivial Pursuit takes the classic long-form board game and reduces it down to just the essentials, so it’s easy to bring to parties or on long road trips. All of the trivia cards and the game die fit inside the handy carrying wedge, and there’s no game board required. Players take turns rolling the die to determine which category of question they will be answering, including Dark Arts, Magical Spells and Potions, and more. With 600 trivia questions in total, there are plenty of brain teasers for the HP fans in your house and you can also add these cards to a standard Trivial Pursuit game. Keep in mind though, the questions are based on the movies, not the books.

According to a reviewer: “This is a fun and portable game that is just the cards, a die for rolling for your category, and a small plastic box to keep it in. I like that it didn’t have a game board to mess around with (although if you already have a Trivial Pursuit board you can use these cards with it). Fun family game with a good mix of questions.”

Unlike Harry Potter, most people need to find the perfect balance between sleight of hand and human expectations to perform magic. Luckily, there are plenty of ways to apparate to the world of Harry Potter without learning any magic tricks, including some very entertaining board games. The best Harry Potter board games can be replayed…

Unlike Harry Potter, most people need to find the perfect balance between sleight of hand and human expectations to perform magic. Luckily, there are plenty of ways to apparate to the world of Harry Potter without learning any magic tricks, including some very entertaining board games. The best Harry Potter board games can be replayed…

55 clever solutions to the most annoying problems around your house