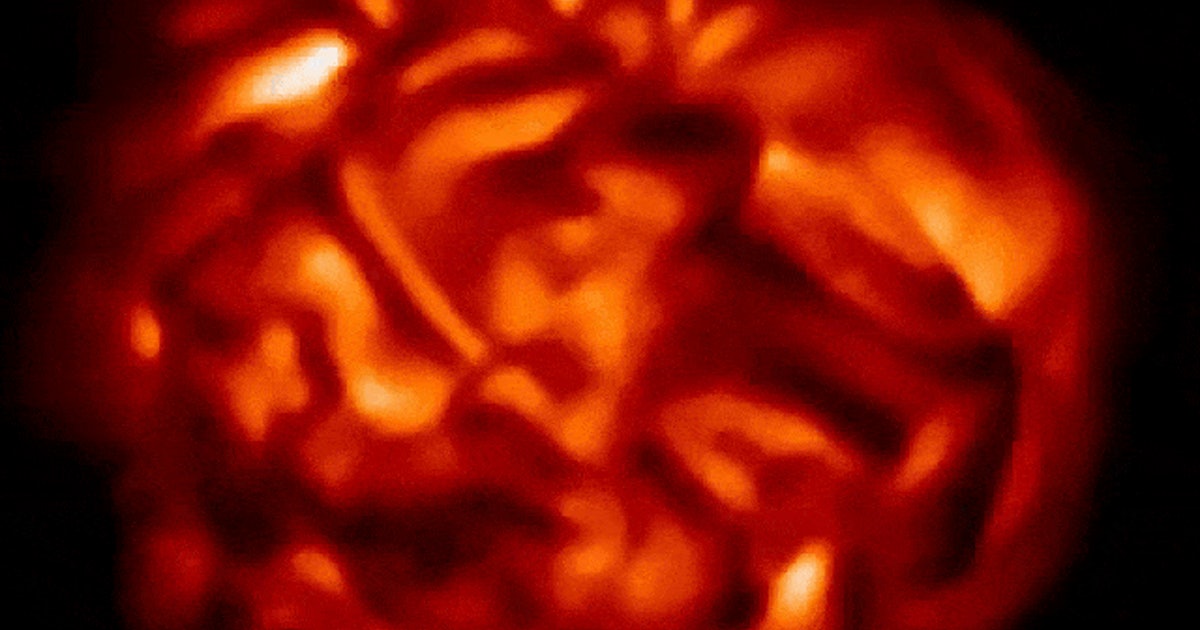 Scientists solve the weirdest cosmic riddle of the past few years

The mysterious dimming of a famous, bright star may have been solved — and the cause is literally explosive.

At a press conference for the 239th meeting of the American Astronomical Society on Thursday, a team of astronomers says Betelgeuse blasted a chunk of its own mass out into space in early 2020, which caused the star to dim suddenly and alarm many observers here on Earth.

By studying data from several telescopes that observed Betelgeuse — the brightest star in Orion — in the months before, during, and after the Great Dimming, astrophysicist Andrea Dupree of Harvard University and the Smithsonian Institution, with her colleagues, pieced together what happened. They suggest that an eruption of material from one of the star’s inner layers left its southern hemisphere cooler and darker than usual. Their findings could provide clues about how giant stars lose mass, and thus about their ultimate fates.

What’s New — Dupree and her colleagues say that Betelgeuse’s Great Dimming event was caused by the star ejecting some of its own mass out into space, leaving behind a cool, dark patch on its southern hemisphere visible from Earth.

They call the event a surface mass ejection, and it’s the first time astronomers have ever observed one directly. By combining observations in wavelengths ranging from near-infrared to ultraviolet from several telescopes including the Hubble Space Telescope and the European Southern Observatory, the astronomers were able to track the event as it surged upward through the layers of the red supergiant star’s atmosphere.

“We have seen that the surface of the star was moving outwards, perhaps propelled by a magnetic field, assisted by the pulsations and radial velocity,” Dupree says. “We believe that this left us not only with a less dense atmosphere, but also a cooler stellar surface.”

On the surface, Betelgeuse looked pretty ordinary in optical images from ESO in early 2019, about a year before the Great Dimming began. But trouble was already brewing millions of kilometers deep in a layer called the photosphere. The photosphere lies just beneath the star’s outermost layer, the chromosphere. In deeper layers, matter is densely packed. The photosphere, on the other hand, is just diffuse enough to let photons emerge, creating starlight.

Spectral observations — which reveal all the specific wavelengths of light emitted from, or absorbed by, an object — revealed more detail about what was going on beneath the surface. When they analyzed that data recently, Dupree and her colleagues could see that in the first months of 2019, Betelgeuse was developing shockwaves deep in its photosphere and moving up towards the star’s surface at about three miles-per-second. By September 2019, ultraviolet images from the Hubble Space Telescope showed the chromosphere — Betelgeuse’s outermost layer — bulging outward in the star’s southern hemisphere.

When the Great Dimming started in January of 2020, near-infrared data revealed that Betelgeuse’s surface was cooler than astronomers had ever seen it. “When it was imaged in the optical, we could see that there was a dark shadow on the surface at the southern part of the star,” Dupree says.

In other words, Betelgeuse had just blasted a chunk of itself out into space.

Our own Sun occasionally does something similar called a coronal mass ejection, or CME. But while CME’s come from the Sun’s super-hot outer layer, the corona, Betelgeuse’s 2020 eruption came from the photosphere, deeper within the star. Due to its immense size, Betelgeuse doesn’t actually have a corona.

“So we’re introducing a new term here, which we’ve been able to observe for the first time directly and follow it through the atmosphere, and that’s a surface mass ejection,” Dupree says.

And Betelgeuse still hasn’t entirely recovered. It’s brightened again since the Great Dimming, but the once predictably variable star hasn’t yet returned to its regular 420-day cycle. Instead, a plot of its brightness since then has been very erratic — so relatable, Betelgeuse.

Here’s the Background — Betelgeuse is one of the brightest stars in the night sky, but in early 2020, it started to dim. For as long as modern astronomers have been watching the red supergiant, Betelgeuse has been a variable star — it slowly dims and brightens on a regular 420-day cycle. However, the early 2020 dimming was faster, and dimmer, than anything Betelgeuse had ever done before. And when a star, especially a massive one like Betelgeuse, starts doing something new, astronomers pay attention.

What’s now called the Great Dimming spawned rampant speculation about an impending supernova. Other colorful ideas included a super-advanced alien civilization building giant solar panels to harvest the star’s energy. Both of those ideas were eventually ruled unlikely (one much more so than the other), but astronomers weren’t sure what was actually causing the dimming. One of the leading theories blamed a cloud of dust in a wide orbit around the star for temporarily blocking its light.

But Dupree and her colleagues suggest that the Great Dimming was coming from inside the star all along.

Why It Matters — Betelgeuse will explode as a supernova someday, and if there are humans on Earth to look up at the sky when it happens, they’ll be able to see the cosmic debris cloud with their unaided eyes. That’s reason enough to get interested when Betelgeuse does something unusual, but astronomers have other reasons to care what makes the red star tick.

“Why do we care about Betelgeuse? It’s large, it’s bright, it’s nearby, and it’s unique because we can resolve the surface,” said Dupree. “That means that we can obtain spectra and images of different parts of the star.” In other words, we can look at Betelgeuse in more detail than we can look at any star except our own Sun.

That detailed view gives astronomers a chance to study how massive stars like Betelgeuse lose mass over time, whether that’s a very gradual process or part of big, sudden events like a surface mass ejection. How a star loses mass, and how quickly it happens, can shape the star’s entire fate, from how it evolves to when it collapses — and how bright an explosion its collapse will produce.

“It has a lot to do with the amount and the way in which stars lose mass, and we don’t know how this happens,” said Dupree. “And, of course, fingers crossed, we’re looking at a star to see how it will behave before it explodes as a supernova.”

What’s Next — For now, astronomers will keep watching Betelgeuse to see what it does next. Dupree is especially interested in whether the star eventually goes back to its 420-day routine in the wake of the Great Dimming.

“The whole character of the light variation has changed substantially,” Dupree says. “Actually, I have a measurement from last night and a couple of measurements from two nights ago, and it may be coming back to its 420-day period. But it seems to be turning up again, at least this past two nights, so clearly things are happening.”

The mysterious dimming of a famous, bright star may have been solved — and the cause is literally explosive. At a press conference for the 239th meeting of the American Astronomical Society on Thursday, a team of astronomers says Betelgeuse blasted a chunk of its own mass out into space in early 2020, which caused…

The mysterious dimming of a famous, bright star may have been solved — and the cause is literally explosive. At a press conference for the 239th meeting of the American Astronomical Society on Thursday, a team of astronomers says Betelgeuse blasted a chunk of its own mass out into space in early 2020, which caused…

7 exercises to train your mind and body for sex, according to experts