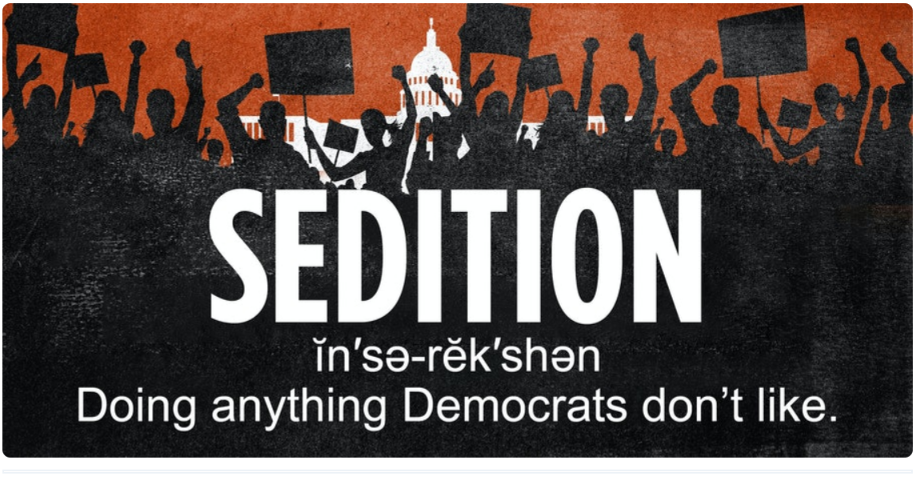 The DOJ announced some interesting new charges against a handful of January 6 participants.

It’s Friday, January 14, 2022, and the Department of Justice still hasn’t charged any J6 participants with insurrection.

What a non-surprise it is, though, to hear that a whopping 11 people of the more than 700 who’ve been arrested have now been charged with something called “seditious conspiracy.” Why, it’s as if the Biden Justice Department had become overly embarrassed by the oft-made observation — most recently made earlier this week by mild-mannered Utah Republican Mike Lee during Senate Judiciary Committee hearings — that the riot of January 6, 2021, might not have been an insurrection after all, given that not a single soul had been charged with insurrection.

And thus, the all-of-a-sudden charges of seditious conspiracy. As The Washington Examiner reports:

The Justice Department announced on Thursday that Oath Keepers leader Stewart Rhodes and 10 others were charged with seditious conspiracy related to the Capitol riot of Jan. 6, 2021. Prosecutors charged Rhodes and the other defendants with crimes “related to the breach of the U.S. Capitol on Jan. 6, which disrupted a joint session of the U.S. Congress that was in the process of ascertaining and counting the electoral votes related to the presidential election.”

Rhodes, a former U.S. Army paratrooper and Yale Law School grad who founded Oath Keepers in 2009, was arrested yesterday morning at his home in Texas. He hadn’t been previously charged, and he’d never actually entered the Capitol. And now he faces “seditious conspiracy” charges.

But sedition and insurrection aren’t the same thing. The former is defined as “conduct or speech inciting people to rebel against the authority of a state or monarch,” while the latter is defined as “a violent uprising against an authority or government.” So they both involve a rebellion against an authority, but the former is about incitement and the latter is about action. Put another way, the former is about saying “Shoot him,” and the latter is about actually shooting him. And since no one has been charged with bringing firearms into the Capitol — because no one did — it doesn’t quite pass the giggle test that this was an “armed insurrection,” despite what Joe Biden and his Leftmedia lickspittles would have you believe. Unless you believe that a bunch of angry middle-aged men riding in golf carts and brandishing MAGA hats and flagpoles were armed enough to overthrow the legislative branch of our federal government.

Interestingly, there’s one guy who wasn’t arrested and charged with seditious conspiracy yesterday, and we wonder why. His name is Ray Epps, and if anyone is guilty of something called seditious conspiracy, it’s him. “We need to go in to the Capitol!” Epps yelled to a huge crowd on the night prior to the riot — and he did so clearly and unequivocally, right here on video. In addition, as Senator Ted Cruz has noted earlier this week during those Senate Judiciary hearings, “On January 6, Mr. Epps is seen whispering to a person, and five seconds later … that same person begins to forcibly tear down the barricades.”

One other person who’s yet to be arrested: The DC pipe bomber — the guy who planted bombs at the Republican and Democratic National Committee headquarters in perhaps the world’s most heavily surveilled city and still hasn’t been caught. Why not?

As for yesterday’s arrests, the actions of the Oath Keepers on January 6 seem somewhat less than insurrectionist, given that they purposely left their guns back in their hotel room in Virginia. As The Wall Street Journal reports: “Once protesters had breached the Capitol perimeter, prosecutors say, members of the Oath Keepers marched into the Capitol as a team in ‘stack formation,’ a single-file military tactic. The group then split up, with half of the Oath Keepers headed for the U.S. Senate chamber while the other half set out for the House of Representatives on the other end of the Capitol building, according to the indictment.”

Not much happened after that. Insurrection? Sedition? If so, what are we to make of the 574 riots that took place during the late spring and early summer of 2020 — riots that cost dozens of Americans their lives, wounded more than 2,000 cops, and did an estimated $2 billion in damage?

Again: None of this is a surprise. The timing of the charges is laughably suspicious, but the fact that charges were brought is not. This is all on the Democrats’ calendar, all scripted, all a coordinated effort to keep outgoing House Speaker Nancy Pelosi’s sham J6 “investigation” in the news, and to keep this vastly overblown story alive and well through November’s midterm elections.

After all, it’s all the Democrats have.

UPDATED to include additional information about the curious case of Ray Epps.

By  DOUGLAS ANDREWS  January 14, 2022 in Rule of Law The DOJ announced some interesting new charges against a handful of January 6 participants. It’s Friday, January 14, 2022, and the Department of Justice still hasn’t charged any J6 participants with insurrection. What a non-surprise it is, though, to hear that a whopping 11 people…

By  DOUGLAS ANDREWS  January 14, 2022 in Rule of Law The DOJ announced some interesting new charges against a handful of January 6 participants. It’s Friday, January 14, 2022, and the Department of Justice still hasn’t charged any J6 participants with insurrection. What a non-surprise it is, though, to hear that a whopping 11 people…