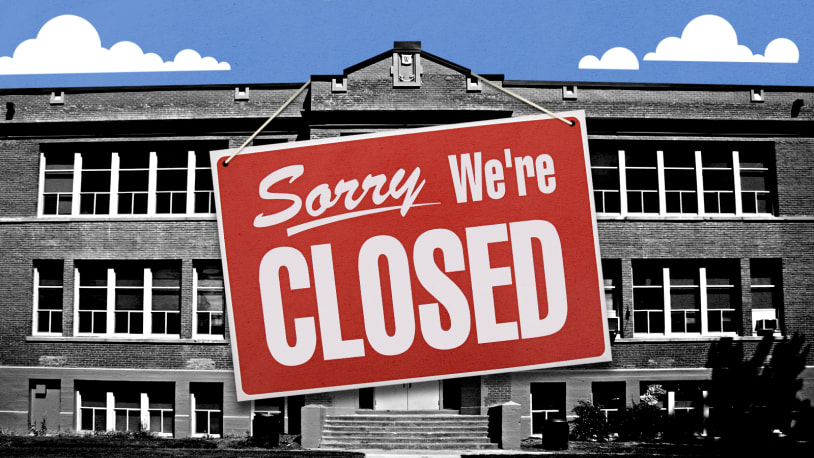 If you’re confused about why so few American schools are closed right now, you’re not alone.

After all, in many parts of the United States, COVID-19 case rates are higher than at any other point in the pandemic. Schools are short-staffed, and many teachers would like to pivot to remote learning for a couple of weeks to ride out the Omicron wave. Yet most schools are open, and many parents and political leaders are determined to keep them that way.

This obstinance is confounding and perhaps infuriating for some who can’t understand what so many parents abhor about resuming remote learning until Omicron subsides. But from my position as an American in the United Kingdom, it seems obvious that parental furor over the prospect of short-term school closures is a direct result of America’s long-term school closures, which caused U.S. students to miss far more school than kids in other rich countries.

When I tweeted as much last weekend, hundreds of American parents agreed. And after speaking to several of those parents this week, it’s clear that America’s approach of keeping schools closed even as bars and restaurants reopened has produced a deep cynicism among American parents. Many no longer believe short-term closures will actually be short-term. Others have lost faith that school closures have anything to do with health. As a result, what many would have considered a reasonable measure early in the pandemic has become politically impossible now.

Some of the present opposition to remote schooling reflects a shift in thinking among U.S. parents, who are growing less concerned about the risks of the virus and increasingly concerned about the shortfalls of remote learning. As of last March, two thirds of parents supported returning to in-person schooling once teachers were vaccinated, as most now are. And a majority of parents — especially those whose school arrangements were partially or fully remote — then worried that their young children were falling behind. More recent polling suggests only 22 percent of parents view in-person schooling as a large risk, up from 11 percent in December but markedly down from 43 percent last year.

But for some parents who endured the longest of school closures, resistance is also a response to betrayal. For Megan Bacigalupi, a California mom whose two sons are currently enrolled in Oakland Unified public elementary schools, the district’s response to the pandemic has been a string of broken promises.

In March of 2020, the district announced it would close for three weeks, which turned into two months, which turned into the rest of the year. As fall 2020 approached, the district announced it would begin the academic year with six weeks of remote schooling, but it wasn’t until March 2021 that any children set foot in an Oakland Unified school building.

All told, Bacigalupi’s sons spent a mere 35 hours in a classroom that year. “Parents are just really unwilling to give an inch because we just feel like we were duped, time and again,” she said. For parents to now be called unreasonable for opposing “a week or two” of remote schooling feels like “gaslighting,” a Virginia parent likewise told me.

Daniela Jampel, a mother of three and founding member of the “Keep New York City Schools Open” movement, believes school closures have often been driven by politics more than health. Teachers unions across the country have used the pandemic as leverage to seek out provisions that have nothing to do with safety.

This isn’t conjecture, Jampel insisted to me, noting that Cecily Myart-Cruz, the head of L.A.’s most powerful union, United Teachers Los Angeles, openly admitted as much last summer. Discussing the prospect of reopening L.A. schools in the fall of 2021, Myart-Cruz stated that “getting back into schools as safe as possible” was a primary goal, but not her only goal. “Are there broader issues at play? Yes, there are. Education is political,” she said. Parents opposed to even temporary school closures now are simply aware of the political reality, Jampel said: “Once you close schools, now you give a lot of power back to teachers unions.”

Even when schools successfully reopened, the conditions for doing so and triggers for shutting down again had little scientific basis, confirming parents’ skepticism. In New York City, for example, schools reopened in the fall of 2020 on the condition that they’d close again once the city’s positivity rate reached 3 percent, which health advisors agree is arbitary. At the time, community positivity was below 1 percent, but cases rose throughout the fall. When the city hit the 3 percent threshold in November, the mayor closed schools again — against the advice of his top health advisors, and despite the fact that the positivity rate in schools was extremely low by comparison.

Perhaps worse was the city’s “two-case rule,” which stated that if any school building had two positive cases, the entire building must shut down for 10 days. Despite infuriating parents, the rule remained in place until April of 2021, when a New York City-based Propublica journalist consulted 10 epidemiologists about the rule. Nine said it doesn’t make sense. “We probably lost tens of thousands of in-person school days, for just bureaucratic inertia,” Jampel told me.

From my position overseas, the profound distrust many American parents feel is at once strange and entirely understandable. Here in the United Kingdom, there is plenty of concern about keeping schools open during the Omicron surge, particularly after Prime Minister Boris Johnson controversially decided not to resume any lockdown restrictions over the holidays.

Many school unions here called for a “pause” to school reopening after Christmas, and some districts pivoted to remote learning for most students against the nation’s official guidance. But there has been comparatively little frustration from parents, which doesn’t surprise me. If the government here announced schools needed to close for a few weeks to wait out Omicron, I’d believe them — because they’ve never given me a reason not to.

The U.K.’s pandemic management has been far from perfect, but it has never put me in the outrageous position, common in America, of seeing schools closed while bars are open. Like most European countries, Britain has generally regarded school closures as a measure of last resort. Schools here were closed for about 16 weeks total since March of 2020 and remained open for children of essential workers and vulnerable children the entire time.

Closures were even shorter elsewhere in Europe. In Denmark, for example, schools were closed for about eight weeks and always remained open for children whose families couldn’t support remote schooling. Last month, as Omicron cases surged in Denmark, the government resumed many lockdown restrictions, including a short-term pivot to remote learning in schools during the last week of the fall semester. But Danish schools reopened again, as promised, on Jan. 4.

Per a Danish parent I consulted, the whole thing went down without much commotion. “It was a small amount of annoyance, but generally I trust that the government takes the right decisions backed by health authorities, so there were no pushback from me,” said Sidsel Kramshøj Adolph. “And I completely trusted that the remote teaching period would be as short as possible and [would] only be prolonged if absolutely necessary.” Most other parents seemed to feel similarly, he said, and there was no debate in the media: “Most parents saw it as an unpleasent but required step to take to get control of Omicron.”

Denmark can still make such requests of its parents because it never stopped prioritizing their needs in the first place. America can’t, because it did.

Now, whether shutting down schools for three weeks to ride out this variant surge is the right decision is, unfortunately, beside the point. Jampel finds it funny — almost endearing — that anyone is surprised New York City schools remain open despite the city’s sky-high positivity rate and the fact that 30 percent of students are absent. That’s the natural outcome of a system that allows politics, rather than health, to dictate the pandemic response. That situation hasn’t changed, she said, the political landscape has.

“Last year, the politics allowed schools to close and this year the politics are not,” Jampel mused. “Health has nothing to do with it.”

January 13, 2022 January 13, 2022 If you’re confused about why so few American schools are closed right now, you’re not alone. After all, in many parts of the United States, COVID-19 case rates are higher than at any other point in the pandemic. Schools are short-staffed, and many teachers would like to pivot to remote learning for a…

January 13, 2022 January 13, 2022 If you’re confused about why so few American schools are closed right now, you’re not alone. After all, in many parts of the United States, COVID-19 case rates are higher than at any other point in the pandemic. Schools are short-staffed, and many teachers would like to pivot to remote learning for a…