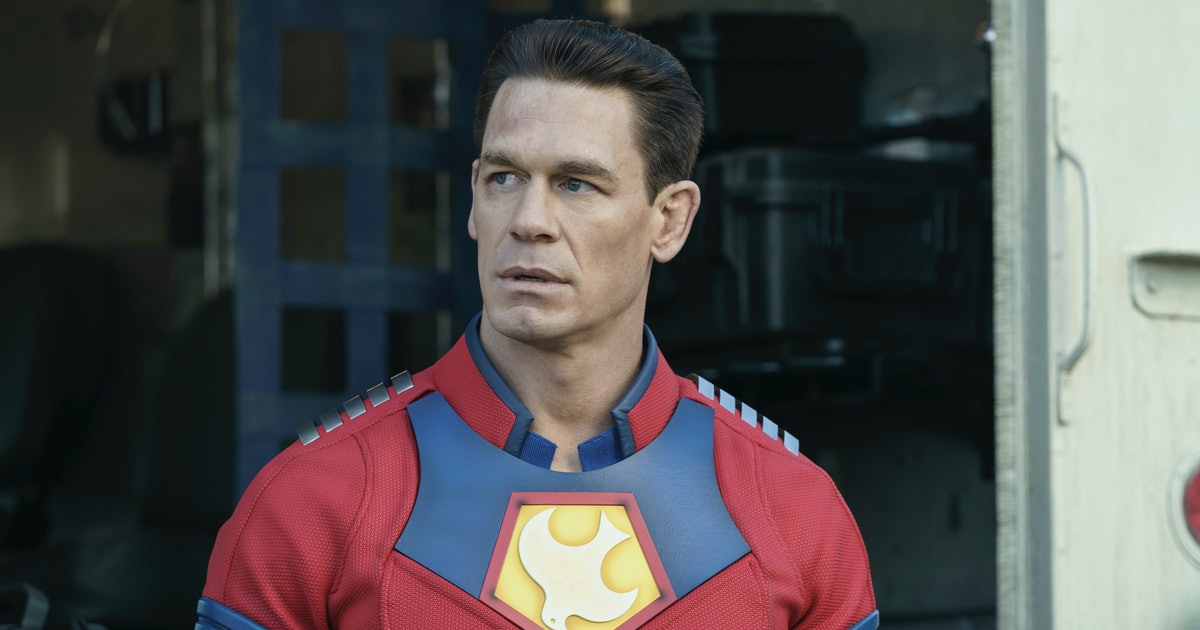 Before he was a movie star, John Cena spent over a decade in the WWE as a role model for children.

His positivity, colorful t-shirts, and encouraging “Never Give Up” motto earned him the unaffectionate nickname of “Superman.” He was bland, boring, and unambiguous. In arenas everywhere John Cena was on the receiving end of boos and offensive chants.

Cena is retired from pro wrestling (maybe), but his starring role in the HBO Max series Peacemaker, premiering January 13, feels like vindication of his past life. Not only is Cena actually emotive enough to be an engaging actor — a common criticism of his wrestling ego was his lack of depth, like a sentient stone idol in jorts — but as a foul-mouthed misogynist and casual racist, Peacemaker is Cena lampooning a twisted mirror self. Thankfully, he has the charisma to let anyone love his broken, wretched person.

Under the guidance of writer/director James Gunn, Peacemaker is an almost sublime superhero satire shouldered by the magnetism, and literal broad shoulders, of John Cena. To its detriment, it can’t resist dirty jokes no matter how repetitious and unsuited to the moment at hand; proof of Gunn’s boundlessness is evidenced in his show’s relentless, cranked-up humor that teeters on offensive. But as a contained superhero saga about family forged out of unlikely circumstances — a recurring theme in all of Gunn’s work — Peacemaker is an early contender for one of the best streaming shows of the year.

A streaming spin-off of 2021’s The Suicide Squad, also from Gunn, Peacemaker follows its title character, real name Christopher Smith, as he puts together the pieces of his broken life. Fresh from The Suicide Squad — recapped in a “Previously On” that makes a summer blockbuster from last year into an episode from last week — Peacemaker and his pet eagle, Eagly, are recruited into a secret task force managed by the enigmatic, tough-as-nails Clemson Murn (Chukwudi Iwuji). Peacemaker doesn’t know the exact terms of his mission, but he doesn’t have much of a choice.

What unfolds over eight episodes is a dysfunctional workplace comedy crossed with R-rated espionage. The end result comes out better than one might expect, especially in a landscape already ruled by similarly aggro cape shows like Harley Quinn, The Boys, and Invincible. Despite this, Peacemaker is gleeful, guilt-free fun, even when little of it is original or tasteful; its humor is always cranked to max volume. But thanks to Cena’s comic timing and blustering presence, as well as others in the cast with proven comedy chops, Peacemaker just barely rises above to become riotous and, on occasion, moving. It doesn’t reinvent any wheels, but the wheels it has run smooth.

Peacemaker’s cast of amoral characters come to care for each other, in another instance of Gunn championing chosen families over blood relation. The Peacemaker crew aren’t as radiant as Gunn’s cinematic Guardians of the Galaxy, however. There’s a lot of mistrust, suspicion, and secrets kept between them, which is good for plot progression but renders most of the show’s tensions mechanical than organic.

Peacemaker’s not-so-lovable misfits range from veteran agent Harcourt (Jennifer Holland) to abrasive techie Economos (Steve Agee). Like Cena, the two return from Suicide Squad in bigger roles, and they gain something resembling a character arc. Newcomer to the franchise, Adebayo (Danielle Brooks), is the show’s other main protagonist and one who sees through specific emotional beats Cena’s Peacemaker cannot. A queer Black woman and rookie agent, Adebayo insists she doesn’t belong, but over time reveals she has more of the job in her blood than she cares to admit.

Freddie Stroma also stars as the unhinged Adrian Chase, a.k.a. Vigilante, a fellow crimefighter and self-proclaimed best friend to Peacemaker. A different take on the character seen in Arrow on The CW, Stroma’s Vigilante regularly threatens to derail the show’s momentum. Out of his intentionally wormy voice and general school shooter demeanor pours a fountain of punchlines that undercut any given scene’s tensions. There are instances of brilliance and even pleasant surprise, such as when Adrian delivers expert put-downs before putting down a gang of white supremacists. But just as the other characters feel icy towards Vigilante’s presence, so too does every scene with him feel like enjoyability Russian roulette.

Opposing Peacemaker is his father, Auggie, played by Robert Patrick. An aging white racist who oozes slurs as if his heart monitor runs on it, Patrick is as chilling here as he was as the T-1000, a villain with unquestionably evil intentions. Though the rival MCU have standardized complex villains, it’s refreshing when a superhero show like DC’s Peacemaker can still be as efficient as “white racist is the bad guy.” There’s a lot you don’t need to think about in Peacemaker, and Peacemaker’s archenemy doesn’t make the cut.

In The Suicide Squad, Peacemaker laid bare his id: “I cherish peace with all my heart. I don’t care how many men, women, and children I need to kill to get it.” Peacemaker, the show, probes whether its main character is capable of change, or if he’s always been full of crap. However Peacemaker ends (the final episode was not available for review), it is a modest triumph for the ongoing boom of subversive superhero media. There isn’t a whole lot new here that genre-savvy fans haven’t seen before. But with John Cena at the center and James Gunn at the helm, there isn’t a lot to hate either. Peacemaker isn’t original, but that doesn’t mean it can’t do the job.

Peacemaker will begin streaming on HBO Max on January 13.

Before he was a movie star, John Cena spent over a decade in the WWE as a role model for children. His positivity, colorful t-shirts, and encouraging “Never Give Up” motto earned him the unaffectionate nickname of “Superman.” He was bland, boring, and unambiguous. In arenas everywhere John Cena was on the receiving end of…

Before he was a movie star, John Cena spent over a decade in the WWE as a role model for children. His positivity, colorful t-shirts, and encouraging “Never Give Up” motto earned him the unaffectionate nickname of “Superman.” He was bland, boring, and unambiguous. In arenas everywhere John Cena was on the receiving end of…

Marvel 2022: Every new show and movie coming this year