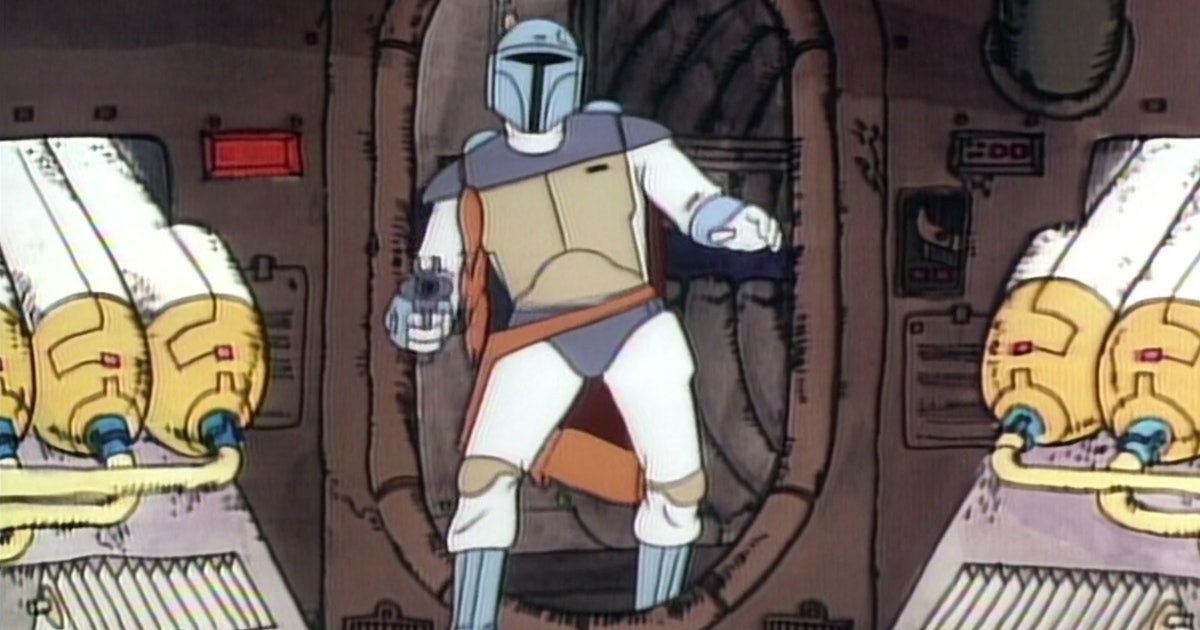 Once Danny Trejo’s character shows Boba Fett his new baby rancor, there’s a reference to the “Witches of Dathomir” and the fact that they rode rancors. This references the 1994 Legends novel The Courtship of Princess Leia by Dave Wolverton and the canonical Nightsisters of Dathomir as a whole. But the telling thing here was Boba Fett’s response to realizing the rancor can be ridden. He’s enthusiastically excited about its potential and brags outright that he knows how to ride giant monsters. He says:

Okay, so what beasts is Fett talking about? The elephant monster in the room is likely the beast Boba Fett rode in the Star Wars Holiday Special.

In The Story of the Faithful Wookiee, when Luke Skywalker’s Y-wing fighter crash-lands on a random planet, he encounters Boba Fett — who he does not know — riding a creature called Paar’s ichthyodont. This saurian lives on the planet Panna Prime and is related to a beast called Panna Dragon, which is not the same but also looks giant.

In The Book of Boba Fett, when Fett says he’s ridden beasts 10 times the size of the baby rancor, what else can he be referring to if not these creatures from the Star Wars Holiday Special?

Of course, it’s possible that Fett also rode some giant winged creatures or possible sea monsters on the planet Kamino, where he grew up. But for some reason, this particular boast feels pointed toward the monsters from the Holiday Special. It suggests that at least part of what happens in that special is now canon. And it wouldn’t be the first time producer Jon Favreau cribbed from the Holiday Special for new Star Wars TV…

When The Mandalorian first debuted in 2019, we saw Mando wielding a two-pronged weapon against Jawas and all sorts of adversaries. This thing is called the Amban phase-pulse blaster, or Amban rifle in canon. By having Mando use one of these in The Mandalorian, the tech of the rifle from the Holiday Special suddenly moved to live-action. Of course, there was also a reference to “Life Day” in the first episode of The Mandalorian, which further seems to suggest that aspects of that story are connected to the real Star Wars canon.

How closely did Boba Fett work with Darth Vader?

The complicated real-life origin of Boba Fett will always muddy the canon waters a bit. When the Holiday Special was created, Boba Fett’s exact relationship to Darth Vader was never quite clear. And there’s plenty of evidence that suggests that Boba Fett was supposed to have become a bigger villain in the original Star Wars movies than what we got.

These days, Fett is shaping up to be more of an anti-hero than a villain, and we’ve always just assumed he worked for Vader because he had to. But if the Fett of the Holiday Special is reconciled with the Fett we know now, then this man has undergone a massive change after having lived in the desert for so long. In the Star Wars Holiday Special, Fett didn’t just ride a beast 10 times the size of a rancor; he abused it too.

But on The Book of Boba Fett, it’s impossible to imagine this version of Fett ever being mean to a creature for no reason. So, if the Holiday Special is canon, then Fett’s redemption arc is way more poignant than anyone realized.

The Book of Boba Fett is streaming on Disney+.

Does it have one? (No spoilers)