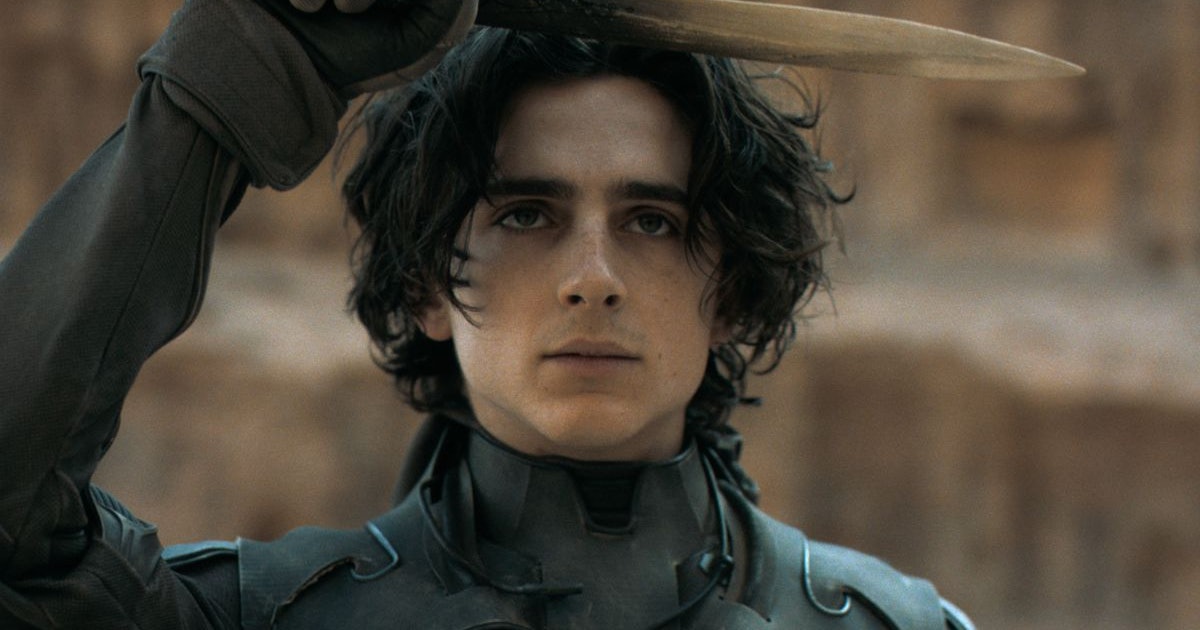 You can’t catch Dune: Part 1 on HBO Max anymore, but if you’re a true spice-head you can snag it on Blu-ray. As of January 11, 2022, you can own the first in what could be a trilogy of Danie Villeneuve’s Dune films as physical media or digital download.

There are no deleted scenes or director’s commentary, but don’t let that fool you. For those obsessed with all things Arrakis, these special features will keep your spice flowing, including a surprising sandworm reveal and four more of the biggest details revealed on the Dune: Part 1 Blu-ray.

According to Timothée Chalamet, the very first thing he filmed for Dune: Part 1 was Paul Atreides’ training scene with Gurney Halleck (Josh Brolin). In the Blu-ray special feature “The Training Room,” Chalamet reveals, “It’s what we shot first. It was my first three days… Josh was captain. Had done combat sequences like that. True to the nature of the scene, he’s the weapons master, he took the lead.”

For Brolin’s part, “It was a very hard fight for me to learn,” mostly because the style was more nuanced than the fighting he’d done in films before.

4. Dune’s fighting style is based on a specific martial art

The “training room” scene itself may have taken three days to shoot, but the preparation and crafting of the fighting styles in Dune: Part 1 took much longer. Fight coordinator Roger Yuan based the style of House Atreides on a Filipino martial art called Kali, which Denis Villeneuve describes as “a cross between martial arts and fencing.”

Yuan says that because Chalamet had a background in both taekwondo and dance, “he has a wonderful memory for choreography.” Because Paul will be doing a lot more fighting in Dune: Part 2, he’ll have to put those skills to use again.

3. The sandworm’s sound designers were told to do the opposite of Godzilla

Although the physical design of the sandworms is impressive, the most important decision in the film is easy to overlook. At no point in Dune: Part 1 are the sandworms presented as mindless monsters, a result that probably has more to do with sound than the way the beasts look.

In the Blu-ray feature called “Designing the Sandworm,” supervising sound editors Mark Mangin and Theo Green reveal a pivotal moment in their process.

“We instinctually began the sound design process to create a massive, frightening beast,” Mangin says. “But Denis made it clear to us early on that was a moment of reverence for a beautiful being. And Theo and I very quickly had to disavow ourselves of that reflex of the ‘Godzilla scream,’ for lack of better word.”

Green doubles down on this, referencing the pivotal scene where Paul encounters the sandworm in the open desert. “That’s the moment where we decided if there’s a silent contemplation between the two of them, then we have something very unusual. It’s not a monster, breaching out of the soil, it’s a meeting with God.”

2. Villeneuve was obsessed with getting the Ornithopter right

Another subtle design element is how the Ornithopter makes you believe it’s a real aircraft. As revealed in the special feature “Building the Ancient Future,” director Denis Villeneuve was adamant that the aircraft scan as something we might have in our own world. The collaboration between Villeneuve and Dune production designer Patrice Vermette was integral to presenting this piece of world-building as convincingly as possible.

“I said to Patrice, I want [the Ornithopthers] to look as real as possible,” Villeneuve says. “I want my mother to believe that this thing can fly for real. I want it to feel muscular. I don’t want it to be necessarily elegant. I want it to be like a bulky and powerful machine that looks like a military helicopter.” To that end, Villeneuve pushed the design away from a “bird” and toward “an insect.”

Several Ornithopters were built for the film, with the average one having a wingspan of 129 feet.

1. Many scenes were changed on the day they were shot

Although this release lacks a shot-for-shot director’s commentary, the combined interviews with Villeneuve, the actors, and the production team get pretty granular when it comes to how the film was made. Perhaps the only thing that’s missing from these special features is a sense of what didn’t make the final cut. We don’t get any deleted scenes on this release, which hopefully changes for future home video versions.

What we do get is an interesting tidbit from Denis Villeneuve. In the “Building the Ancient Future” segment, Villeneuve talks about his reasoning for physically constructing so many detailed sets. Part of his reasoning is that the reality of the film relies on this nitty-gritty feeling, but he also says that the physicality of the way the Dune sets were built sometimes altered the visual storytelling.

“You must build as much as possible, it will influence imagination. Tons of ideas are being born on the day on set, the way the light falls on the set. It changes your reality when you’re in a real environment.”

Essentially, Villeneuve is telling us that certain things about Dune: Part 1 changed because of the way the production design influenced the cinematography. He doesn’t elaborate on exactly what these things might be. But when Dune Part 2 eventually comes out in October 2023, whatever is in the script (or novel) could end up looking very different on the screen.

Dune: Part 1 is out now on Blu-ray and DVD, and is streaming to rent.

You can’t catch Dune: Part 1 on HBO Max anymore, but if you’re a true spice-head you can snag it on Blu-ray. As of January 11, 2022, you can own the first in what could be a trilogy of Danie Villeneuve’s Dune films as physical media or digital download. There are no deleted scenes or…

You can’t catch Dune: Part 1 on HBO Max anymore, but if you’re a true spice-head you can snag it on Blu-ray. As of January 11, 2022, you can own the first in what could be a trilogy of Danie Villeneuve’s Dune films as physical media or digital download. There are no deleted scenes or…