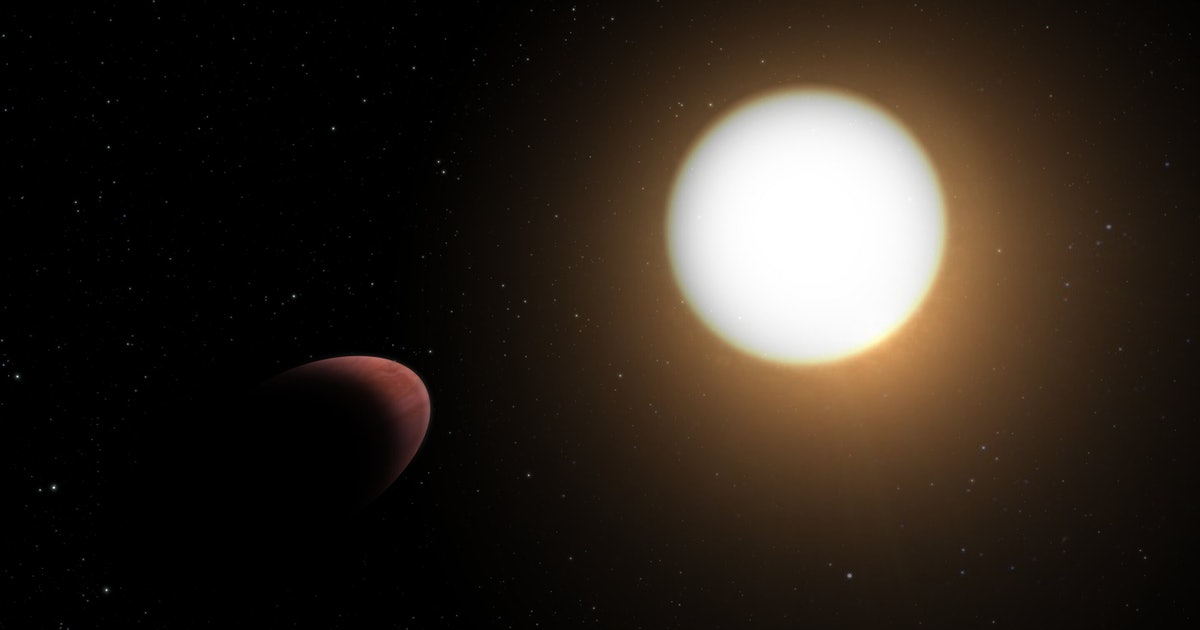 Planets are all globes, right? Wrong. If they are like WASP-103b, then they are far from the perfect orbs we see in our mind’s eyes — rather, a new discovery reveals some planets might look more like a potato.

The discovery — The planet, WASP-103b, is located around an F-type star 1500 light-years away from Earth. This star is larger and more massive than the Sun, and the planet is also large, about one-and-a-half times the size of Jupiter. An international team of astronomers published fresh findings in Astronomy & Astrophysics on Tuesday that detail the world’s weird shape for the first time.

It seems that because of its close proximity to its home star — less than 20,000 miles — tidal stresses pull WASP-103b into an unlikely shape, which astronomers have compared to a rugby ball. It also looks a bit like an egg or a potato.

Here’s the background — Planets in our Solar System exist millions of miles from our host star, and they take at least a few months, a year (Earth!), or many years to make one full orbit of the Sun. But a group of exoplanets known as Hot Jupiters orbit their home stars in a matter of days, sometimes just hours. Hot Jupiters which orbit their star in less than a day are known as ultra-short-period planets.

Astronomers initially discovered WASP-103b in 2014, and noted at the time that the planet must experience severe tidal stresses due to its proximity to its home star — it orbits WASP-103 in 22 hours. This is not the shortest known orbital period — some exoplanets have been found with periods less than 10 hours — but it is short enough to make WASP-103b a pretty extreme world.

When it was discovered, scientists suspected it might have an unusual shape based on modeling, though it was unconfirmed — until now.

How they did it — Using the European Space Agency’s CHEOPS mission and data from NASA’s Hubble and Spitzer space telescopes, the team pieced together the weird shape of WASP-103b. The planet transits WASP-103 from our point of view — that is, passes in front of its home star.

This is one of the primary planet-hunting methods, wherein a telescope waits for an exoplanet to pass in front of a distant star and notes how much the star seems to dim. The dimming can give a lot of info about the planet, including its size. But this study takes a different approach by also analyzing the light curves coming from WASP-103 to determine the shape of its planet.

The combined approach suggests the planet stretches at its equator, yanked by tidal forces into an oblong shape — something unseen in our Solar System as our planets are all too far away from the Sun for such a dramatic effect. Even Jupiter’s moon Io, which is stretched and pulled by Jupiter over the course of its 42-hour orbital period, stays roughly spherical.

Finding a planet like this is rare — another planet, WASP-12b is a similar size, oblong shape, and has a similar orbital period, but it is being ripped apart by its home star and isn’t so well-detailed in observations.

“It’s incredible that Cheops was actually able to reveal this tiny deformation,” Jacques Laskar, a Paris Observatory at Université Paris Sciences et Lettres astronomer and co-author of the research, says in a press statement.

“This is the first time such analysis has been made, and we can hope that observing over a longer time interval will strengthen this observation and lead to better knowledge of the planet’s internal structure.”

Why it matters — To date, astronomers have discovered 4,884 planets — and have around 8,400 candidates they’re working their way through confirming. These planets all come in different shapes, sizes, and configurations. Such a vast amount of data helps astronomers refine how planets form, and how systems like our own come to be — as well as challenging our assumptions.

This includes understanding the tidal stresses stars put on their planets. Most ultra-short period planets are doomed as their star siphons off material or otherwise rip them apart. But in a weird twist, astronomers believe that WASP-103b is moving away from, rather than toward, WASP-103, potentially sparing it this nefarious fate.

What’s next — Further studies of WASP-103b will help astronomers understand the internal structure of the planet and how it affects the atmosphere of the world, which is puffed out in comparison to Jupiter. These investigations will also help confirm if the planet is, indeed, moving away from the star, and what could be causing that.

The recently-launched James Webb Space Telescope could look at WASP-103b and similar tidally-stressed planets to better understand them, the ESA says. We can’t wait to see what other strange worlds the telescope might turn up.

Aims. WASP-103b is the exoplanet with the highest expected deformation signature in its transit light curve and one of the shortest expected spiral-in times. Measuring the tidal deformation of the planet would allow us to estimate the second degree fluid Love number and gain insight into the planet’s internal structure. Moreover, measuring the tidal decay timescale would allow us to estimate the stellar tidal quality factor, which is key to constraining stellar physics.

Methods. We obtained 12 transit light curves of WASP-103b with the CHaracterising ExOplanet Satellite (CHEOPS) to estimate the tidal deformation and tidal decay of this extreme system. We modelled the high-precision CHEOPS transit light curves together with systematic instrumental noise using multi-dimensional Gaussian process regression informed by a set of instrumental parameters. To model the tidal deformation, we used a parametrisation model which allowed us to determine the second degree fluid Love number of the planet. We combined our light curves with previously observed transits of WASP-103b with the Hubble Space Telescope (HST) and Spitzer to increase the signal-to-noise of the light curve and better distinguish the minute signal expected from the planetary deformation.

Results. We estimate the radial Love number of WASP-103b to be hf = 1.59−0.53+0.45. This is the first time that the tidal deformation is directly detected (at 3 σ) from the transit light curve of an exoplanet. Combining the transit times derived from CHEOPS, HST, and Spitzer light curves with the other transit times available in the literature, we find no significant orbital period variation for WASP-103b. However, the data show a hint of an orbital period increase instead of a decrease, as is expected for tidal decay. This could be either due to a visual companion star if this star is bound, the Applegate effect, or a statistical artefact.

Planets are all globes, right? Wrong. If they are like WASP-103b, then they are far from the perfect orbs we see in our mind’s eyes — rather, a new discovery reveals some planets might look more like a potato. The discovery — The planet, WASP-103b, is located around an F-type star 1500 light-years away from…

Planets are all globes, right? Wrong. If they are like WASP-103b, then they are far from the perfect orbs we see in our mind’s eyes — rather, a new discovery reveals some planets might look more like a potato. The discovery — The planet, WASP-103b, is located around an F-type star 1500 light-years away from…