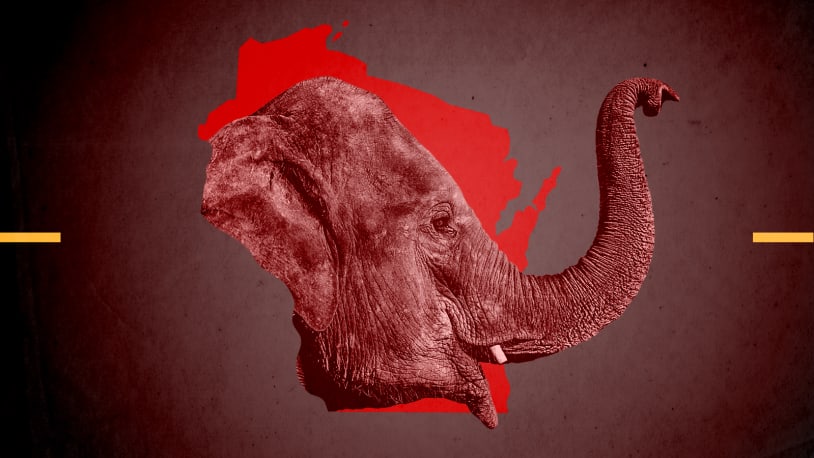 Wisconsin’s 1-party rule is what the GOP wants everywhere

Wisconsin’s Democratic Gov. Tony Evers can’t do his whole job because Republicans in his state won’t let him.

Evers hasn’t been able to get most of his nominees to the state’s higher education system approved by the Republican-controlled state Senate. GOP lawmakers haven’t voted on his picks — or, in three cases, haven’t insisted the Republican-appointed officials whose terms have already expired duly vacate their seats so Evers can replace them, reports the Wisconsin State Journal. Just like Antonin Scalia’s Supreme Court seat, these seats will be held open until they can be filled by the next Republican governor. And Evers’ entire tenure has been like this. Wisconsin Republicans have fought him tooth-and-nail on measures to control the pandemic and even started his term by removing key powers his GOP predecessor had enjoyed.

Though famously a swing state, Wisconsin effectively exists under one-party rule — and it’s a preview of what the Republican Party aims to do on a national scale.

The foundation of Republican control of Wisconsin is one of the most extreme gerrymanders in American history. Back in 2018, Republicans lost the popular vote in the state Senate races by 52.3 percent to 46.9 percent, yet gained two seats for a 19-14 majority. In the state Assembly, they lost the popular vote 53.0 to 44.8, yet lost only one seat to retain a 63-36 supermajority — and that was a wave election year for Democrats. It is de facto impossible for Democrats to win given any remotely realistic distribution of votes.

That ridiculous Saddam Hussein-esque cheating led to a legal challenge to the gerrymander as a violation of Wisconsin residents’ constitutional rights. But the conservative Supreme Court majority tossed the case in 2019 on obvious political grounds, giving Wisconsin Republicans free rein to cheat some more. (Virtually the sole principle in conservative jurisprudence is this: “If it benefits Republicans, that means it’s constitutional.”)

As a result, new maps based on the latest census data are nearly as bad. The Princeton Gerrymandering Project gives the proposed maps drawn up by the Wisconsin legislature for the Senate and Assembly an “F” for partisan fairness. The project estimates that in a 50-50 election, Republicans would have a 13.6 percent advantage in Assembly seats and a 19.7 percent advantage in the Senate. In both houses, a majority of seats are rated as safely Republican. For the last decade, the people of Wisconsin have had effectively no say in their government, and now they’ll have no say for the next decade. Vote for whomever you want, you’ll get GOP rule every time.

Now, Evers did win the Wisconsin governorship in 2018 by a whisker because a statewide race is comparatively immune to gerrymandering. But when that happened, Republicans promptly passed a suite of bills gutting his power. That’s why he’s struggled to fight the pandemic and to get appointees in place. Whenever Democrats win power at any level, the Republican response in Wisconsin (and anywhere they can manage it) is to change the rules.

Now, Democrats aren’t immune to the gerrymandering temptation. States like Maryland have a long tradition of rigging district boundaries to benefit Democrats. Historically, they usually did it to protect party machine incumbents in liberal states, not run Republicans out of power forever, though recently, Democrats are starting to respond in kind with congressional maps they control. Still, for all that, Democrats have proposed a law that would ban partisan gerrymandering across the country. That Republicans don’t support it shows they think they stand to gain by preserving their ability to cheat.

But the issue in Wisconsin is bigger than gerrymandering, and it should be noted that what Republicans are doing there and in other states has a long tradition in this country. The legal foundation of Jim Crow was various facially-neutral laws that in practice prevented Black people from voting and the opposition from winning any power. The rule established by Plessy v. Ferguson (1896) and several other racist Supreme Court rulings was that Southern white supremacists could discriminate to their heart’s content so long as they pretended they weren’t doing exactly that.

However, it would be novel to carry out a similar project on a national scale, and that’s what Republicans are trying now. Their gerrymandering in congressional maps at present is not nearly as extreme as it was after 2010, mainly because the current version didn’t happen after a sweeping GOP victory, but that won’t matter if they just rig the electoral system altogether. Republicans have nearly bulletproof gerrymanders of legislatures in swing states like Wisconsin, Michigan, Georgia, and Arizona. Mobilized by former President Donald Trump’s “Big Lie” — that he didn’t lose the 2020 election — they’re gradually taking direct control of election administration. Deranged right-wing extremists, mobilized by frenzied propaganda about imaginary liberal election fraud, have flooded into previously sleepy election administration positions. The fact that Trump and his top cronies won’t be punished for the Jan. 6 putsch has only emboldened them.

The legal theory that state legislatures have total power over their Electoral College votes, and hence can hand them to whatever candidate they want — even after the votes have been counted — is quickly becoming dogma among Republican legal apparatchiks. And if that ploy doesn’t work, Republican states could simply refuse to send electors, which would kick the result into the House, where each state gets one vote (according to the traditional procedure, at least), and the GOP would win because they control so many low-population states. SCOTUS, of course, will likely bless any GOP cheating strategy that has even a glimmer of facial legality — they rejected Trump’s attempts to overturn the election in 2020, but only because those suits were so undeniably harebrained and loony.

Here we have several strategies by which Republicans can keep control of political power regardless of vote totals — just like they’ve done in Wisconsin. And if the world’s most powerful office comes firmly under their control, it would be a trivial matter to cement control of the rest of the levers of national power as well. Will elected Democrats who are still empowered to do their jobs realize before it’s too late?

Wisconsin’s Democratic Gov. Tony Evers can’t do his whole job because Republicans in his state won’t let him. Evers hasn’t been able to get most of his nominees to the state’s higher education system approved by the Republican-controlled state Senate. GOP lawmakers haven’t voted on his picks — or, in three cases, haven’t insisted the Republican-appointed officials…

Wisconsin’s Democratic Gov. Tony Evers can’t do his whole job because Republicans in his state won’t let him. Evers hasn’t been able to get most of his nominees to the state’s higher education system approved by the Republican-controlled state Senate. GOP lawmakers haven’t voted on his picks — or, in three cases, haven’t insisted the Republican-appointed officials…

The self-radicalizing logic of conservative intellectuals