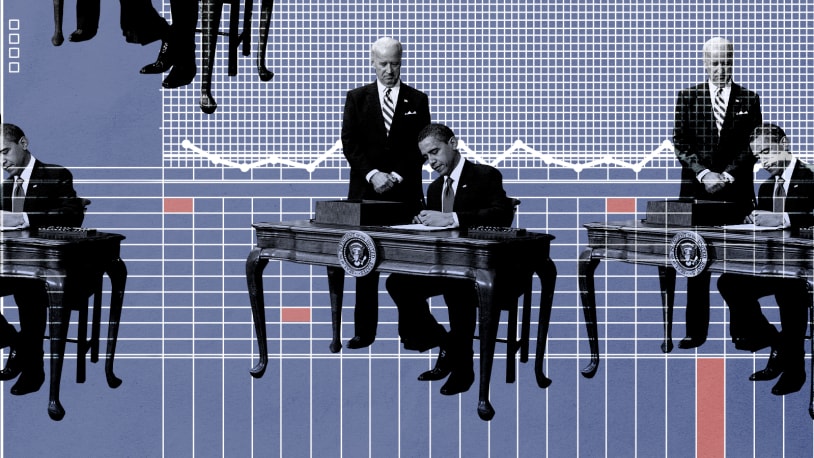 The American economy has some problems. Inflation is higher than it’s been in decades; there are continuing shortages of important items (above all, cars); and the pandemic is still fouling up supply chains all over the world.

Yet all things considered, the economy has recovered from the shock of COVID-19 with incredible speed. In the latest employment report, unemployment fell to 3.9 percent — historically an excellent rate only seen about once a decade at best. Wage growth is shooting up, especially in low-wage professions. If the pandemic does finally fade out this year and disruptions to supply chains get ironed out, 2022 could see the best job market for workers since the 1960s.

That may or may not happen. But even without further improvements, all this makes for a galling comparison with the feeble recovery that followed the 2008 financial crisis. We could have had this high-employment, high-wage economy back in 2010 if then-President Barack Obama and massive Democratic majorities in Congress hadn’t utterly bungled their most important task: restoring full employment.

Let me start by reviewing the story of the past year. When President Biden was inaugurated last January, the unemployment rate was 6.4 percent, and the fraction of prime working-aged people (25 to 54) with a job was 76.4 percent. That’s roughly where those figures were in 2014, halfway through Obama’s second term. One year later, the unemployment rate has fallen by nearly half, and the prime age employment rate is up to 79.0 percent — or about where those numbers were in 2018.

In other words, the post-2008 recovery was so weak that in 2020 we replicated four years of that era’s growth in a single year. The past 12 months have seen about 6.4 million jobs created — more than half of the net total of Obama’s entire presidency.

What accounts for the difference? There’s one big and obvious answer: stimulus. In 2009, the Obama administration and congressional Democrats passed an economic rescue package of only about $831 billion — less than half of what the administration’s own economists thought was necessary. As a result, the immediate recession was ended, but the ensuing recovery in both growth and jobs was pathetically weak.

During the COVID-19 pandemic, total stimulus spending has come to about $5 trillion: the $2 trillion CARES Act in March 2020, another trillion in December 2020, and a further $1.9 trillion with the American Rescue Plan in March 2021. And unlike the Recovery Act in 2009, most of this came in direct payments to individuals and businesses who were likely to spend it.

Yes, these are two very different situations. In 2008, we had a recession caused by a financial crisis and a collapse in the housing market. Now, of course, we have a pandemic. But in terms of economics, there was wide overlap.

Keynesian theory suggests a modern economy is vulnerable to self-perpetuating collapses in spending. If a bunch of people get thrown out of work and lose their income, they stop spending, which drives other companies out of business, which means more lost jobs, and so on. The 2008 crisis was a classic example of this.

The 2020 crisis was different in that people voluntarily stayed at home. This hit the supply side of the economy, but demand was also drastically lowered in those first few weeks of lockdown. Without the CARES Act, there would have been a shattering collapse of spending and probably American society (remember, at the peak of the economic disaster in March and April 2020, America lost over 6 million jobs in one week).

These scenarios have enough in common — and enough difference in the policy response — that we now know beyond any question that spending fixes recession and unemployment. And the more you spend, the faster the problem is fixed. If Democrats had dumped sufficient money into the economy in 2009, they could have gotten unemployment down to 5 percent at least by Election Day 2010 instead of the 10 percent it was in reality.

So how did Democrats screw up so badly? Obama apologists often argue that there was no way to get more stimulus out of Congress, but that’s hardly a complete story.

Administration advisers (specifically economist Larry Summers and chief of staff Rahm Emanuel) made a gut check guess about what moderates would vote for in the Senate, then refused to even propose more than that. They didn’t aim high with the expectation of getting bargained down to a still-high number. They started far too low. Obama himself failed to insist he would veto any stimulus that wasn’t large enough, after which he could have relied on the resulting stock market crash and general panic to force a bigger bill past Congress (this is exactly how the bank bailout got jammed through mere months prior).

More concretely, as Obama fundraiser Reed Hundt details in his book A Crisis Wasted, Summers and other key aides, like Tim Geithner and Peter Orszag, all rejected tricks that would have boosted the effect of the stimulus without raising its headline price. They could have refinanced state debt at the ultra-low federal interest rate, thus easing pressures on their budgets, or gamed the budget window by front-loading spending balanced with tax increases that would not take effect for years. Best of all, they could have set up a green infrastructure bank that would have functionally made $10 of stimulus for every dollar appropriated, according to the budget rules (because they could issue $10 of loans for every dollar in capital, similar to a normal bank), and thus made progress against climate change while creating jobs.

The didn’t do any of that because decision-makers in the Democratic Party didn’t want sufficient stimulus. They doomed their party to total wipeout in the 2010 midterms.

As an aside, none of this is meant to endorse the Biden administration’s decision to let the boost to unemployment benefits expire back in September or its apparent plan to prioritize economic recovery over controlling the pandemic. Cutting off unemployment made no perceptible difference to the rate of job growth, and it seems likely that failing to control the pandemic slowed the economy rather than boosting it because of disruptions to child care and workers’ health. And even if it would have slowed the economy somewhat to implement more public health controls (like strict vaccine mandates), it would have been worth it to save lives and protect the hospital system, which is on the brink of collapse in many states.

But back in 2009 there was no pandemic and hence no such tradeoff between economic health and human health. There was no reason — other than bankrupt ideology and blinkered philistine pig-ignorance — not to go hog-wild with stimulus, say, $2 trillion for starters. Even better, Democrats could have set up triggers to keep the money flowing so long as, say, inflation was below 5 percent and unemployment above 5 percent.

This time, we’ve at least done better than in 2009. Let’s hope America can remember the lesson of the pandemic rescue packages for crises to come.

January 10, 2022 January 10, 2022 The American economy has some problems. Inflation is higher than it’s been in decades; there are continuing shortages of important items (above all, cars); and the pandemic is still fouling up supply chains all over the world. Yet all things considered, the economy has recovered from the shock of…

January 10, 2022 January 10, 2022 The American economy has some problems. Inflation is higher than it’s been in decades; there are continuing shortages of important items (above all, cars); and the pandemic is still fouling up supply chains all over the world. Yet all things considered, the economy has recovered from the shock of…

How the algorithm killed the jingle

Why it’s harder than ever to make a hit podcast