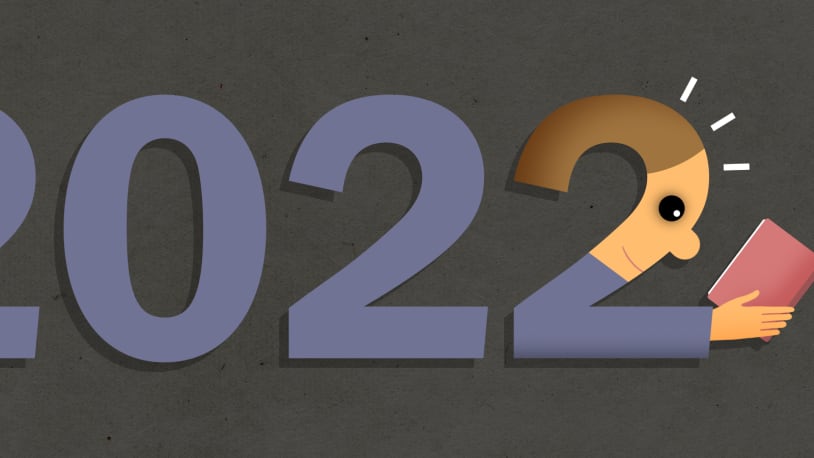 One of the best rituals of early January is planning your reading list for the year. Will 2022 be when you finally crack open that copy of Ulysses? Maybe you intend to read three books a month — or maybe this will be the year you switch to only ordering from local bookstores, which are still struggling from the pandemic.

No matter the reason, though, these days are dark and cold — and therefore the perfect excuse to give yourself something to look forward to. Here are books worth adding to your looming to-read pile for 2022.

When Kathryn Schulz is described as “one of the great writers of our time,” it’s more than just the usual marketing babble. The Pulitzer Prize-winning writer of that really scary New Yorker article about the impending Pacific Northwest mega-earthquake, Schultz’s memoir promises to be just as seismic, albeit on a more personal scale. Eighteen months before her father died, Schulz fell in love, and this book weaves together meditations on those two great hallmarks of human relationships: loss and discovery. Preorder here.

The apocalypse fiction boom bleeds into 2022 with Goliath, set about 30 years into the future as the well-off flee our polluted, plagued, and collapsing planet for space colonies. Author Tochi Onyebuchi, a Hugo and Nubela Award finalist, follows a number of characters in this “biblically inspired cautionary tale” that, if anything, might feel too uncomfortably familiar. “Onyebuchi sets fire to the boundary between fiction and reality, and brings a crumbling city and an all too plausible future to vibrant life,” Shadow and Bone author Leigh Bardugo blurbs. “Riveting, disturbing, and rendered in masterful detail.” Preorder here.

How Are You Going to Pay for That?: Smart Answers to the Dumbest Question in Politics, by Ryan Cooper (Jan. 25)

Most progressives have at one point or another encountered the “gotcha” question that serves as the title of this debut book by The Week‘s national correspondent, Ryan Cooper. Coming to the aid of dinner table debaters, Cooper offers a characteristically zesty counterargument to free market talking points, like the contention that expensive social welfare programs can’t work in the United States. “Questions like ‘How will you pay for that?’ are rooted in a very old way of thinking that sees the economy as something outside of human control,” he writes in the introduction, but “the real deep-down truth is this: The whole economy is the result of human choices and actions, above all through the state.” Fans of Cooper’s column for The Week won’t want to miss it. Preorder here.

Other books to read in January:

Let’s Get Physical: How Women Discovered Exercise and Reshaped the World, by Danielle Friedman (Jan. 4); To Paradise, by Hanya Yanagihara (Jan. 11), You Don’t Know Us Negroes and Other Essays, by Zora Neale Hurston (Jan. 18); Violeta, by Isabel Allende (Jan. 25); Devil House, by John Darnielle (Jan. 25)

The Books of Jacob, by Olga Tokarczuk, translated by Jennifer Croft (Feb. 1)

Like many Americans, I didn’t discover Polish author Olga Tokarczuk until after she won the Nobel Prize for Literature in 2018. But Drive Your Plow Over the Bones of the Dead and, in particular, Flights became my go-to recommendations after discovering them the following year. That explains why I’m beside myself with excitement over the pending release of her “magnum opus” in English after a reported seven years of translation. Running more than 1,100 pages, The Books of Jacob “tells the story of Jacob Frank, a controversial Polish-Jewish religious leader and mystic who founded the Frankist sect in the 18th century,” The Guardian writes. Sure, sign me right up. Preorder here.

The second novel in Marlon James’ Dark Star Trilogy — self-described as being “an African Game of Thrones” — retells the events in the first volume from the perspective of Sogolon, the 177-year-old Moon Witch and antagonist of 2019’s Black Leopard, Red Wolf. “The second part of this trilogy is darker and, in many ways, more moving than its predecessor,” writes Kirkus Reviews in its starred assessment. Because of the Rashomon-esque narrative and importance of conflicting perspectives, the Dark Star Trilogy is not required to be read linearly; that is to say, you can start with Moon Witch, Spider King without having read the first book. Indeed, you even should. Preorder here.

Other books to read in February:

Very Cold People, by Sarah Manguso (Feb. 8); Foreverland: On the Divine Tedium of Marriage, by Heather Havrilesky (Feb. 8); Index, A History of the: A Bookish Adventure from Medieval Manuscripts to the Digital Age, by Dennis Duncan (Feb. 15); Woman Running in the Mountains, by Yūko Tsushima, translated by Geraldine Harcourt (Feb. 22); The Paris Apartment, by Lucy Foley

Bless the Daughter Raised by a Voice in Her Head, by Warsan Shire (March 1)

To say Warsan Shire’s first full-length poetry collection is “highly anticipated” is an understatement. The Kenyan-born, Somali-British writer and poet is a favorite of Beyoncé, and her writing “evokes longing for home, a place to call home, and is often nostalgic for memories not her own, but for those of her parents, grandparents, uncles, and aunts, people who forged her idea of her ancestral homeland through their own stories,” The New Yorker writes. You might already be familiar with one of her multiple viral poems, may count yourself among her nearly 80,000 Twitter followers, or could be encountering her for the first time — regardless, consider Bless the Daughter essential reading. Preorder here.

In the Margins: On the Pleasures of Reading and Writing, by Elena Ferrante, translated by Ann Goldstein (March 15)

There are few things more enjoyable than reading a master talk about their craft, and it doesn’t sound like Elena Ferrante — the Italian author behind My Brilliant Friend and The Lying Life of Adults — disappoints. In the Margins collects four of her essays that offer insight into Ferrante’s approach to writing, from describing her elementary school forays in narrative to her influences today. Tantalizingly, Publishers Weekly writes “the author’s legions of fans are in for a treat” with this release. Preorder here.

Portrait of an Unknown Lady, by María Gainza, translated by Thomas Bunstead (March 22)

If you haven’t read Argentine author María Gainza’s Optic Nerve yet, fix that now — and then you’ll understand why I’m so excited about her next book to be translated into English, Portrait of an Unknown Lady. The new book is reportedly an art-world detective story, set in Buenos Aires, in which an unnamed protagonist working for an authenticator begins to pursue a forger named Renée who specializes in copying portraits by the Austrian painter Mariette Lydis. Gainza herself is an art critic, and the fact that she’s returning to the setting of the art world for this novel is an incredibly promising sign. Preorder here.

Other books to read in March:

January 10, 2022 January 10, 2022 One of the best rituals of early January is planning your reading list for the year. Will 2022 be when you finally crack open that copy of Ulysses? Maybe you intend to read three books a month — or maybe this will be the year you switch to only ordering from local…

January 10, 2022 January 10, 2022 One of the best rituals of early January is planning your reading list for the year. Will 2022 be when you finally crack open that copy of Ulysses? Maybe you intend to read three books a month — or maybe this will be the year you switch to only ordering from local…