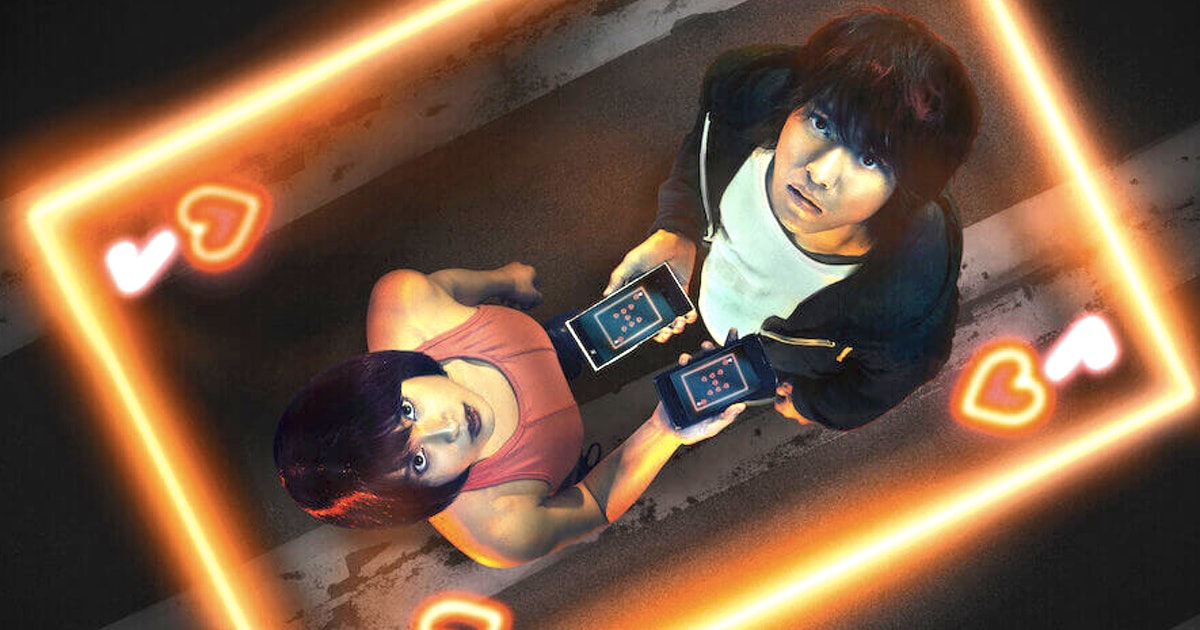 Alice In Borderland’s first season has been a trip down the rabbit hole like no other: Tokyo has become a ruthless games arena in a parallel universe where the cost of losing is death. How can Netflix top this breathtaking premiere in Alice In Borderland Season 2?

It’s an evincible concept, but the greatest achievement of this live-action television adaption of a Japanese manga is just how stupidly entertaining it is. With Alice In Borderland Season 1 concluding with the kind of megalithic cliffhanger that’s left our mouths watering for whatever mayhem comes next, the only words on our lips now are how long do we have to wait for Season 2?

For the unfamiliar, Alice In Borderland is Netflix’s big-budget adaption of the Hara Aso manga series of the same name, and it’s just about every great dystopian concept rolled into one. Imagine a metropolitan Battle Royale where contestants are forced to partake in Saw-like “games” full of Jumanji-esque surprises. Sounds like a win-win, right? Well, it is for the viewer, but certainly not for the unfortunate participants whose brutal elimination will come via a laser cannon in the sky if they should fail.

Late to the Mad Hatter’s tea party? Since premiering in December 2020, Alice In Borderland has made the top 10 in over 40 countries and territories worldwide. It’s the most popular Japanese live-action title on the streaming service. No surprises, then, that Season 2 was greenlit the same month.

Here’s everything we know about the future of Alice In Borderland Season 2, from release date to the plot.

What’s the plot of Alice in Borderland Season 1?

Warning! Spoilers for Alice In Borderland Season 1 ahead.

Talented slacker Arisu (the “Alice” in question) plays videogames all day while texting pals Chōta and Daikichi. Life’s pretty sweet, even if his parents do give him a bit of a tough time about his lack of motivation. But when the trio rubs the local police up the wrong way after some larks down by the iconic Shibuya Crossing, they’re forced to take refuge in a nearby public toilet. When the jokers emerge, the whole city is deserted. It’s a stunning scene that feels strongly reminiscent of the dystopian classic 28 Days Later.

An ominous sign points them on their way: “The games start here.” But as Arisu and co. soon discover, these games aren’t just for fun. In this mysterious Borderland, citizens’ livelihoods are governed by their possession of a VISA, which dictates how many days they have left before they are zapped into oblivion by an ominous sky laser. Should you compete in and survive one of the many games being held, you win a few extra days. Simple, right?

Well, there’s a fair deal more to it than that. As each episode goes by — generally based around a different deadly challenge — it is gradually revealed that there are four different types of game, each with a difficulty rating. These are symbolized by the suits and values from a deck of cards: a nine of Spades constitutes a challenging game of strength; a two of Diamonds is a more forgiving battle of wits. Clubs signify a team challenge, while Hearts represent an element of betrayal.

The first few episodes of Alice In Borderland can be knocked back like shots on a bar counter. In one episode, an apartment block turns into a cat-and-mouse chase as contestants seek respite from a gun-wielding adversary. In another, a tank rapidly fills up with water; solve a riddle to turn off the taps. Endurance tests and geometric puzzles are scattered elsewhere, and a few wild animals are thrown in for good measure.

The series deals a dramatic blow at the midway point: Chōta and Daikichi are eliminated, leaving Arisu distraught. Forced to continue alone (until he forms a bond with exercise fanatic Usagi), he winds up at “The Beach” — a vibrant community of tenuous survivors who take refuge at a hotel complex. Led by the hippie-ish “Hatter,” a grand plan is presented: band together as a team and collect a full deck of cards, and the mystery of the Borderland will surely be revealed.

Of course, it’s an offer too good to be true. A power struggle wipes out Hatter, leaving the brutish Aguni in charge of operations at The Beach. Then, a new game begins: a “ten of Hearts” challenge to complete the full deck. A murder has taken place; kill the perpetrator to win the game. Aguni and his gang are in it to win it, and a killing spree only ends after Arisu manages to solve the riddle. But in doing so, he also stumbles upon another twist. Amid the hordes of players forced to participate in these cruel challenges, there are also “dealers” acting against them to extend their own VISAs.

The series ends with Arisu and Usagi happening upon a control room full of dead “gamemasters” — another league of players working for what remains an unseen antagonist. It is then revealed that the next chapter in the Borderland will offer an even greater challenge: the face cards.

When is Alice In Borderland Season 2 release date?

With so much of the plot still shrouded in mystery (Who’s pulling the strings? What is the Borderland? What do the face card challenges entail?), there’s plenty to get excited about in Season 2. And judging by the many twists and jaw-dropping set pieces encountered so far, the journey towards salvation will no doubt be full of surprises.

Season 2 was greenlit within two weeks of Alice In Borderland’s premiere — on Christmas Eve, in fact. But it took almost a year, until Netflix’s Japan Festival virtual event, to confirm a release date. Alice in Borderland Season 2 is currently slated for release in December 2022, two years after Season 1 dropped.

Is there an Alice In Borderland Season 2 trailer?

A video teaser dropped on Christmas Eve via Netflix, but it’s nothing to get too excited about – unless you’re a big fan of playing cards.

In the meantime, there are a few different things that could tie us over until the next phase. A three-episode OVA (original video animation) was released back in 2015 – good luck finding that in the US, though. The manga is a better bet (if you can read Japanese), along with the spin-off series Alice On Border Road. A third series titled Alice In Borderland: Retry ran from October 2020 to February 2021.

As for an official trailer, you can probably expect something about a month before Alice in Borderland Season 2 is released.

How many seasons will Alice In Borderland Have?

The first season covered roughly 31 chapters of Hara Aso’s manga series, leaving another 33 chapters to explore. With that math, Season 2 may well be the last of Alice In Borderland. At the same time, spreading out the remaining story across a few more episodes wouldn’t be a bad idea, either.

If things keep going well for the series, Netflix could also adapt the manga’s side stories and sequel series. The concept, after all, is bona fide — and full of endless possibilities.

Who is in the Alice In Borderland Season 2 cast?

Arisu and Usagi survived the first season, but as Alice In Borderland has shown, plot armor is thin, and nobody is guaranteed to be safe for long. No new cast members have been confirmed yet. Still, the series already introduced many new characters halfway through Season 1 after Arisu’s buddies met their maker, and many of these are still shrouded in mystery.

In her battle with tattooed swordsman Last Boss, martial artist Kuina was revealed to be a transgender woman at the close of season one. Will this backstory take on greater relevance in Season 2? Who is Mira, the executive member of The Beach community who reveals at the conclusion that the next round of the games will be the face cards? And then there’s the smiling, scheming, grey-haired Chishiya (whose name references the “Cheshire Cat”). What are his intentions?

With its many subtle parallels to Alice In Wonderland’s characters and themes, clues to how Season 2 will continue can likely be found in Lewis Carroll’s classic novel. Let’s not forget that Season 1 ended without a main villain visible in play — who exactly will be the Queen of Hearts?

A few new contenders will no doubt come into play — likely more hip young Japanese pop stars and television sensations, as much of season one’s cast has been — but for now, there’s already enough on the table still in need of investigating.

Also read: 5 plot details from the manga to expect in Alice in Borderland Season 2.

Alice in Borderland Season 2 arrives in December 2022 on Netflix.

Alice In Borderland’s first season has been a trip down the rabbit hole like no other: Tokyo has become a ruthless games arena in a parallel universe where the cost of losing is death. How can Netflix top this breathtaking premiere in Alice In Borderland Season 2? It’s an evincible concept, but the greatest achievement…

Alice In Borderland’s first season has been a trip down the rabbit hole like no other: Tokyo has become a ruthless games arena in a parallel universe where the cost of losing is death. How can Netflix top this breathtaking premiere in Alice In Borderland Season 2? It’s an evincible concept, but the greatest achievement…

‘Godzilla vs. Kong’ release date, trailer, and cast for the big monster brawl