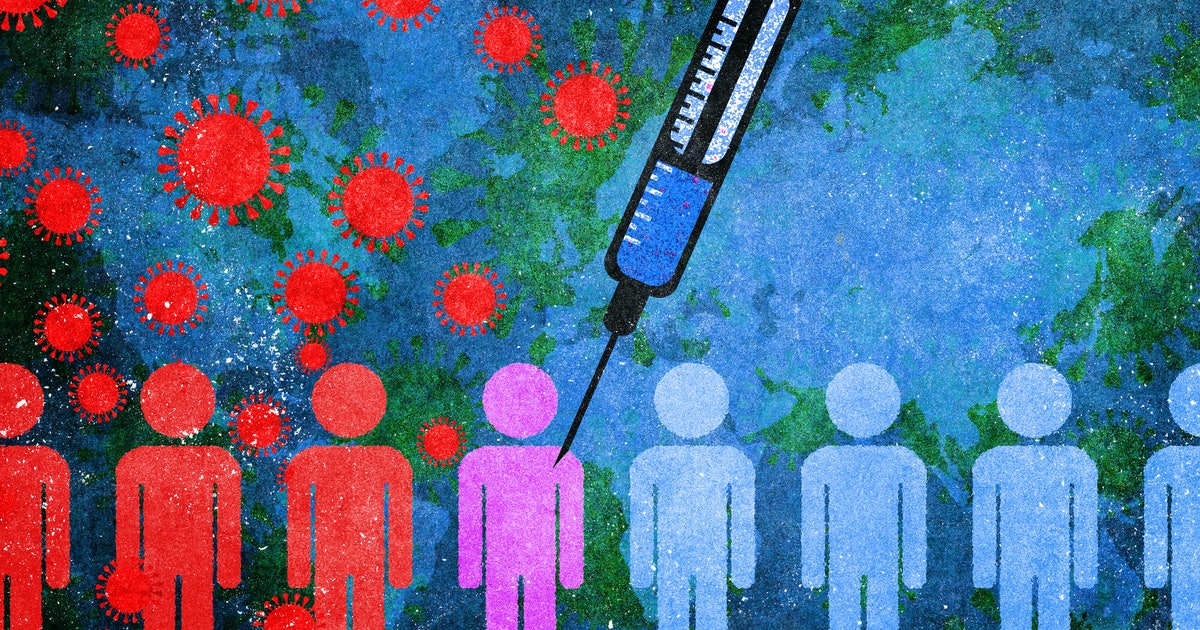 3 ways to change it

Covid vaccines protect people from severe illness and death, but in the U.K., they’re not doing so evenly. While overall uptake of Covid vaccines in Britain is high, it isn’t uniform across all ethnic groups.

Such differences are found across all age groups, although the size of the difference varies. The uptake of boosters is also lower in ethnic minority groups, again varying by age and ethnic group.

Hospital admissions reflect the consequences of this. Of critically-ill patients admitted to intensive care units in England, Wales, and Northern Ireland between May and December 2021, almost eight percent were Black, compared to a local Black population of just under five percent in the areas covered by these data.

And of pregnant women with Covid admitted to intensive care, 24 percent were Asian, even though Asian people made up only 10 percent of the population covered. South Asian people also have much higher rates of long Covid than the majority white population, as do Black people.

Vaccines remain a central defense against Covid, and even more so now the omicron variant has emerged. Boosters are Britain’s main weapon for limiting omicron’s impact. Vaccine uptake needs to be as high as it can be. What, then, is limiting uptake in some ethnic groups – and what can be done about it?

Getting to the root of the issue

We began by identifying factors that affect vaccine uptake in ethnic minority adults – specifically of vaccines used to protect against diseases of the lungs and airways. Looking across academic research, we found 31 relevant studies from the U.K., the U.S., and Australia. From these, we identified six factors that potentially influence uptake.

We also wanted to find ways of increasing vaccine uptake in ethnic minority adults, and so looked in the relevant research for strategies that had been suggested or tested. The papers indicated three that might improve uptake.

But would this information from past research be relevant now in the Covid pandemic? And would it be applicable to the U.K.? To find out, we summarized these findings and organized a series of online discussions between the project partners. Representatives from the community organizations, together with other members of our collaboration, discussed the findings for around 12 hours to check their accuracy and applicability to the U.K.’s current context.

When discussed, all the factors and strategies were considered important and relevant to Covid vaccination among ethnic minority groups in the U.K.. No additional factors or strategies were suggested. However, the discussion showed that some of the six factors were linked and so could be combined.

This left us with three barriers to vaccine uptake that we could be highly confident of being accurate:

The discussions revealed that lack of trust in particular drives many vaccination decisions. Sundus, one of our community organization partners, summarised it like so:

“There is a ‘hostile environment’ in the UK that goes beyond the healthcare system and vaccinations; other injustices, such as Windrush and the Grenfell Tower fire, have contributed to a lack of trust. These set the tone for minority ethnic voices not being heard or believed. A ‘broken relationship’ exists.”

How to increase Covid-19 vaccine uptake

It should come as no surprise that the ways suggested to improve vaccine uptake aim to tackle each of these barriers in turn. The research and discussions underlined the need to use trusted messengers, make sure that vaccine information is appropriate to the community being targeted, and be flexible about venues and times for vaccination. Any approach to increasing vaccine uptake in ethnic minority communities needs to consider all three strategies.

These strategies sound simple, but none can be done well without knowing who is trusted, what is appropriate, and how to be flexible. Answering those questions needs direct engagement with organizations that understand and have the trust of ethnic minority communities.

Indeed, this is one of our key lessons: organizations promoting vaccine uptake need to engage directly with ethnic minority communities to correctly tailor their efforts to get more people vaccinated. Messaging, for example, may be scientifically correct, but often uses language that means the message is lost.

As another community organization partner, Phanuel, put it:

“People naturally delivering messages on social media was resonating more than the corporate speak of public health messaging. Need to ask, how would you deliver this message if you were talking to friends on WhatsApp?”

Finally, evaluation of vaccine strategies is crucial. We uncovered what might work, but there’s remarkably little rigorous evidence on the effect of any strategy to improve vaccine uptake in ethnic minority groups, whether for Covid or any other disease. To protect as many people as we can in the future, that needs to change.

This article was originally published on The Conversation by Shaun Treweek at the University of Aberdeen. Read the original article here.

Covid vaccines protect people from severe illness and death, but in the U.K., they’re not doing so evenly. While overall uptake of Covid vaccines in Britain is high, it isn’t uniform across all ethnic groups. At the beginning of December, 90 percent of all white people aged 50 to 54 had been vaccinated with a…

Covid vaccines protect people from severe illness and death, but in the U.K., they’re not doing so evenly. While overall uptake of Covid vaccines in Britain is high, it isn’t uniform across all ethnic groups. At the beginning of December, 90 percent of all white people aged 50 to 54 had been vaccinated with a…

One behavioral science hack can help you succeed