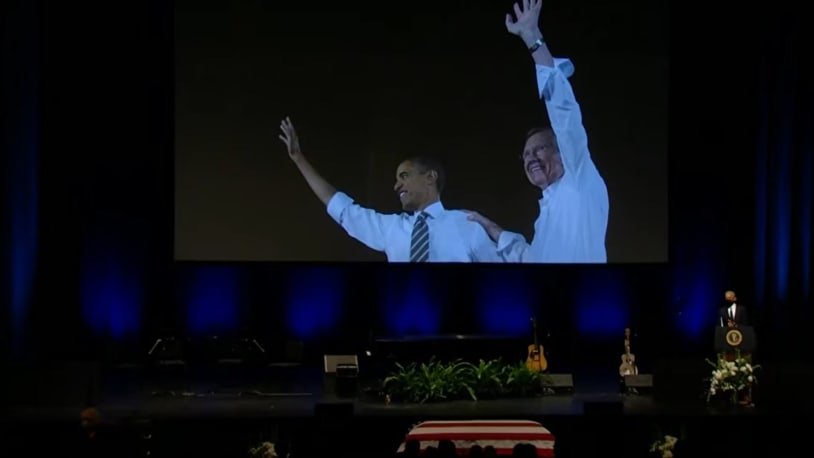 Common themes in the speeches were Reid’s rise from inauspicious circumstances, his humility, his persistence, and his penchant for ending phone conversations without saying goodbye.

Schumer (D-N.Y.) referred jokingly to himself and Reid — a “brash Jewish kid out of Brooklyn” and a “soft-spoken Mormon” from a town “miles away from nowhere” — as a “match made in heaven.” He recalled an encounter with Reid at the 2012 Democratic National Convention, where Reid slipped Schumer $400 to save him from being “the worst-dressed member of the Senate.”

Schumer described Reid as “tough as nails, a fighter to his core, but also one of the most compassionate individuals you could ever imagine.” He read from 2 Nephi in honor of Reid’s devout Mormon faith and ended his speech with the traditional Jewish words of condolence, “May his memory be a blessing.”

“I never heard Harry say an unkind word about any of his Senate colleagues, Democratic or Republican,” Pelosi said. Obama later disagreed, saying “I don’t know about that, Nancy — but he would work with them.” Pelosi also spoke fondly of Reid’s “dry sense of humor” and self-effacing nature.

Former President Barack Obama began his eulogy by remembering that Reid was always “uncomfortable when people said too many nice things about him” but that “as he looks down on us today, Harry is going to have to suck it up.”

He recalled an awkward first conversation with Reid immediately after he was sworn into the U.S. Senate. But later, Obama said, he came to understand that Reid was an “outsider” in Washington, a kindred spirit whose “path to the Senate” was “at least as unlikely if not more unlikely than mine.”

The 44th president also drew attention to Reid’s willingness to change his mind and adopt more liberal positions on issues like gun control, immigration, and abortion as his career progressed.

He credited Reid with being one of the first people to encourage him to run for president and looked back favorably on his time as president, working with Reid, Pelosi, and then-Vice President Biden to pass the Affordable Care Act and the Dodd-Frank Act.

“Pragmatism, adaptability, a premium on getting things done, lack of pretention, abiding loyalty: that’s what Harry Reid represented. A man of old-school virtues. They are qualities that are in short supply these days. Yet it seems to me that they are precisely the qualities our democracy requires,” Obama said.

President Biden, who served in the Senate with Reid for 22 years, was the last speaker of the day.

“Harry was like the guys I grew up with in Scranton,” Biden said. “Harry would always have your back … Harry had mine, and he knew I had his … If he gave you his word, he kept it.”

Reid’s body will lie in state in the Capitol Rotunda next week before being interred in his hometown of Searchlight, Nevada.