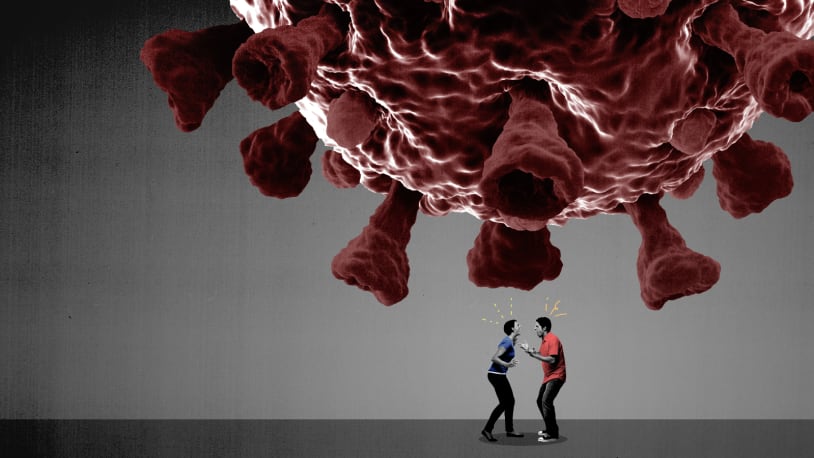 The inescapable inadequacy of our COVID blame game

Living through the deadliest pandemic in a century is a horrible experience.

I say that despite it being obvious — because apparently it isn’t obvious enough.

Our lives have been disrupted in innumerable ways for nearly 22 months. My son had no senior prom and no real high school graduation ceremony. His first semester of college was spent in a single dorm room, much of it under lockdown with classes attended online. My daughter’s final months of eighth grade took place virtually from our dining room table. School continued that way until the spring of her freshman year of high school. Aside from a mask mandate, her sophomore year started normally, but now a third of her classmates and several of her teachers are out sick. School could close at any time if too many become ill with the Omicron variant currently surging across the country.

It’s awful. And everyone has their own variation on the story. If you live in a part of the country with higher rates of vaccinations, you probably also have to endure numerous ongoing public-health restrictions and disruptions to daily life. If you live in a place with fewer restrictions and lower rates of vaccinations, you probably know more people who have died.

And there really is no end in sight. Last June, I wrote a column about the strangeness of living through the waning days of the pandemic, with the virus dying out because of rising vaccination rates but still lingering. Soon it would be behind us, but not yet. That was before the summer and autumn surges of the Delta variant, and now the Omicron variant, which is much less deadly but much more contagious, sending the numbers of new cases skyrocketing to unprecedented levels.

What will come next? Will the widespread natural immunity conferred by Omicron insulate us from yet another surge? Or will the next variant be able to bypass both natural and vaccine immunity? Or make its victims sicker? Will the vaccinated need to keep receiving boosters to protect themselves? And, if so, will there be any long-term health consequences of doing so? We don’t know the answers to any of these questions, which means we don’t really know how long the pandemic will go on.

I rehearse all of this to make a simple point — the one I asserted in my opening sentence. The past 22 months have been terrible, and there’s no clear end in sight to the awfulness, even if present circumstances are somewhat less awful than the initial months of pandemic. It feels bad to face this fact squarely. And maybe that’s why so many of us direct that bad feeling outward, towards targets in the world. Not toward the virus, which is the true culprit, but toward our fellow human beings, whom we much prefer to blame, even if doing so makes little sense and confers only the ersatz, self-flattering satisfaction that always follows from expressions of righteous indignation.

Any time we confront a problem or difficulty, we engage in a two-step response. First, we name it. Then we identify its ultimate cause, a source of the problem we can blame and combat.

Take poverty as an example. It’s a problem for every society and certainly for the United States. But where does it come from? Why is it there? What’s to blame for the presence of poor people in our midst? One option is that certain people are exploited and oppressed by the rich. Another is that the poor are a negative externality of the creative destruction of capitalism. Yet another is that some people are invariably lazier or less intelligent than others, leading them to sink to the bottom of the economic hierarchy of their own accord.

The first possibility blames the wealthy. The second blames the economic system. The third blames the poor for their own immiseration.

We can ask similar questions about the cause of rising rates of suicide and accidental drug overdoses in recent years. Is American drug policy to blame? Or the neoliberal economic order? Or defective morals? Or globalization? Or modern malaise?

I suspect the answer is that both problems arise from a range of causes, and so each item listed is blameworthy to some extent. Yet much analysis of these and other problems tends to highlight just one cause for blame. Predictably, it then proposes solutions designed to combat the problem on that sole basis. There’s nothing inherently wrong with prioritizing one solution, but it’s important to keep in mind that the decision to focus on any single cause is a simplification often driven by prior assumptions.

We blame the cause we were already inclined to blame.

When it comes to COVID, many on the right blame lockdowns. Or mask mandates. Or vaccine mandates. Or the teachers union. Or pathetic, wimpy, feminized, coddled, upper-class, anxiety-sodden risk aversion. Or government incompetence. Or power-hungry progressives out to strengthen government’s grip on American throats. On the outer fringes, a few blame a government conspiracy to control individual minds through chemicals contained in the mRNA vaccines pushed by Washington.

As for the left, it blames right-wing ignoramuses for both refusing to get vaccinated and resisting perfectly reasonable public health measures; and conservative media rabblerousers for spreading disinformation; and local, state, and federal governments for failing to impose more mandates and restrictions to stop the spread. A handful of prominent left-libertarians even suggest a network of liberals, health care conglomerates, and pharmaceutical companies wants to make the pandemic permanent in order to advance their economic and political interests.

That’s a lot of blame. And there’s a lot of partial truth in much of it. There have been myriad mistakes made by a long list of public figures, institutions, and individuals over the past two years, some of them quite serious and worthy of examination with an eye to course correction now and the initiation of reforms and other improvements down the road.

But something other than reformist zeal appears to be behind much of the blaming — something more like deflection.

Blaming a nonsentient and nonconscious entity like a virus for our woes isn’t very satisfying. The pain it inflicts on us isn’t intentional, and we can’t retaliate by inflicting our own physical or spiritual pain on the virus in return. I suspect that’s one important reason so many of us prefer to direct ire at our follow human beings for their failures, incompetence, and supposedly malign intentions instead.

But we shouldn’t lose sight of the fact that such blame is never more than partially deserved — and that the corollary of blaming others (the presumption that the pandemic would be going so much better if only the authorities would listen to me) is in nearly every case a kind of self-justifying delusion.

There’s no way that living through the deadliest pandemic in a century was ever going to be anything other than a horrible experience. Laying blame can’t change that a bit.

January 7, 2022 January 7, 2022 Living through the deadliest pandemic in a century is a horrible experience. I say that despite it being obvious — because apparently it isn’t obvious enough. Even with several highly effective vaccines available for nearly a year, more than 830,000 Americans have died of COVID-19. That’s roughly one out…

January 7, 2022 January 7, 2022 Living through the deadliest pandemic in a century is a horrible experience. I say that despite it being obvious — because apparently it isn’t obvious enough. Even with several highly effective vaccines available for nearly a year, more than 830,000 Americans have died of COVID-19. That’s roughly one out…

Why are schools closing for COVID again?