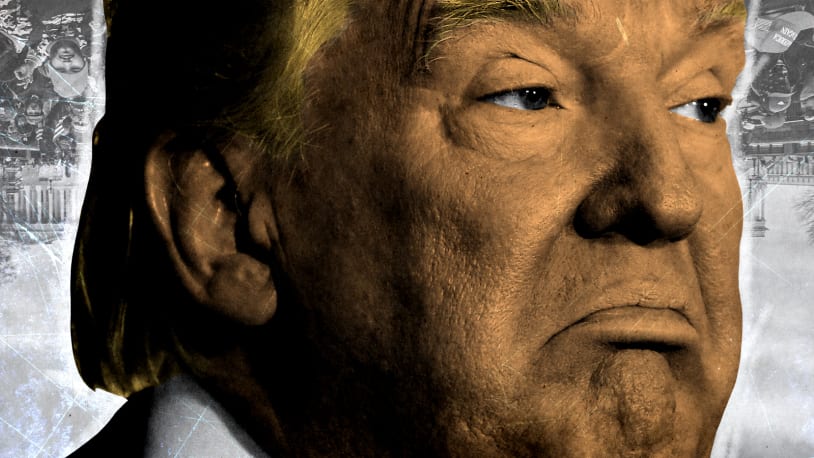 Why hasn’t Trump been prosecuted for the Jan. 6 Capitol riot?

One year ago today, a violent mob of right-wing extremists stormed the heart of American democracy trying to keep then-President Donald Trump in power after his election loss. Egged on by Trump and his top cronies, they seriously injured dozens of Capitol Police officers, disrupted the election certification, threatened the lives of congressional Democrats and then-Vice President Mike Pence, and wreaked havoc inside the Capitol itself.

As my colleague David Faris writes, there’s presently little sign Democrats are capable of using their congressional majorities to patch the holes in the electoral framework Trump tried to exploit. But there’s a much more obvious and straightforward step President Biden and Attorney General Merrick Garland could take: throwing Trump and his accomplices in jail.

In a speech on Wednesday, Garland insisted he “remains committed to holding all Jan. 6 perpetrators, at any level, accountable under law — whether they were present that day or were otherwise criminally responsible.” If that’s true, why have only the rabble had their days in court?

Trump whipped up his putsch in public, right in front of live television cameras. The evidence necessary to bring charges has been visible for an entire year, yet Garland has done nothing. Most observers expect neither Trump nor any of his closest aides will face prosecution, because impunity is the rule for elites in this country. And if that expectation is correct, he or someone like him will try to seize power again, by fraud or force, and sooner or later will succeed.

For context, it may be worth considering the typical response to a failed putsch throughout history. It doesn’t look like Garland’s empty rhetoric.

When Lucius Sergius Catilina attempted to overthrow the Roman Republic in 63 BCE, he was hunted down by the military and killed along with all his followers. When Henry Percy, 1st Earl of Northumberland, invaded England to try to depose Henry IV, he was defeated, beheaded, and his head displayed on the London Bridge. When a group of army officers attempted to overthrow the French Republic in 1961, they were arrested, prosecuted, and imprisoned (though some later had their sentences commuted).

At the risk of belaboring the obvious, all this happened because of the incumbent government’s self-preservation instinct. States punish insurrectionists both as a signal that sedition won’t be tolerated and to take specific dangerous figures out of play.

Historical exceptions to this practice only further the point: When Adolf Hitler attempted a putsch in 1923, for instance, he got off with a slap on the wrist thanks to a sympathetic right-wing judge. A decade later he was chancellor.

It’s not hard to imagine what a normal country would do in response to something like Jan. 6. The putschists who stormed the Capitol would be prosecuted, of course, but the principal organizers would get the primary attention of law enforcement. We don’t need medieval barbarities to deter sedition — enforcing existing laws would be just fine.

Trump, his lawyer John Eastman, Rudy Giuliani, the cadre of members of Congress who helped the plot along, and everyone else who gave speeches whipping up the crowd beforehand — every one of these would be charged with insurrection and seditious conspiracy under 18 U.S. Code § 2383-84. The cases would be open-and-shut. Every other Republican who voted to overturn the election would be kicked out of Congress and permanently banned from holding any federal office under Section 3 of the Fourteenth Amendment.

But America is not a normal country. The low-level chumps, lunatics, and small business owners who made up the bulk of the putschists are being prosecuted, thus far exclusively for relatively minor crimes like trespassing or disorderly conduct. And Trump and other organizers are getting off scot-free.

Whatever Garland may say, it seems the federal law enforcement apparatus is unwilling or unable to consider Trump’s mob as real criminals. And despite Garland’s talk of accountability “at any level,” it categorically refuses to prosecute the ringleaders. We saw last year how the Capitol Police brass totally failed to prepare for the putsch despite clear warnings and how numerous officers fraternized with the mob. Law enforcement generally, from police departments to the FBI to the judiciary, leans conservative.

Yet that only pushes the question back one level. Garland could easily set up a special unit to make sure key prosecutions aren’t slow-walked, but he hasn’t done it.

I see two main reasons: One, our political culture is saturated with a profound, knee-jerk chauvinism about the Constitution and America’s supposed status as the land of freedom. Politicians are constantly flapping their jaws about how the U.S. is a “city on a hill” or “the land of opportunity,” as if every other nation is somehow Tsarist Russia. “In no other country on Earth is my story even possible,” said then-Sen. Barack Obama in his famous 2004 DNC keynote address, as if America is the only place where someone with an immigrant parent could possibly get elected to the legislature (it isn’t, for the record).

But two, the Constitution, together with the rest of the legal machinery underpinning the electoral system, is in reality an embarrassing, outdated piece of junk — the political equivalent of a rusting 100-year-old truck that will barely idle and can’t into any gear except reverse. Well before the 2020 election, Barton Gellman wrote an article in The Atlantic carefully explaining how the Electoral Count Act (which nominally governs presidential transition process) is a vague, sloppy mess with multiple inconsistencies. The bizarre American tradition of allowing an election loser to remain president for two months meant that Trump had ample time to try to exploit this janky system to cling to power.

It was darkly amusing to watch American chauvinists ponderously refuse to grapple with this after Trump’s initial refusal to concede defeat. Here’s Benjamin Wittes, editor-in-chief of Lawfare and an influential member of the Beltway elite, on November 19, 2020:

There are very few perfect designs for governance, but the Constitution’s approach to ensuring a president cannot remain in power in the face of the expressed will of the electorate is awesome in its automaticity and resistance to presidential interference.

Lots of countries are unjustly proud of their constitutions or political systems. But the real American exceptionalism is this: In no other country is there such a yawning abyss between the pompous self-satisfaction of the political culture and the grubby reality of the ancient, crumbling, jerry-rigged political institutions.

That, I submit, explains Garland’s refusal to prosecute someone who is certain to try to seize power again if he can: Whenever something awful happens to demonstrate that the U.S. is just another ordinary country with many foibles, or that the political class is full of deranged criminals, the chauvinist instinct is to sweep it under the rug and deny anything is wrong.

Garland is so hypnotized by illusions of American greatness he can’t believe what’s happening right under his nose. The blow to American pride would be too strong and what it would reveal about America’s fallen state too traumatizing.

Better to just keep playing make-believe until it’s too late.

January 6, 2022 January 6, 2022 One year ago today, a violent mob of right-wing extremists stormed the heart of American democracy trying to keep then-President Donald Trump in power after his election loss. Egged on by Trump and his top cronies, they seriously injured dozens of Capitol Police officers, disrupted the election certification, threatened…

January 6, 2022 January 6, 2022 One year ago today, a violent mob of right-wing extremists stormed the heart of American democracy trying to keep then-President Donald Trump in power after his election loss. Egged on by Trump and his top cronies, they seriously injured dozens of Capitol Police officers, disrupted the election certification, threatened…