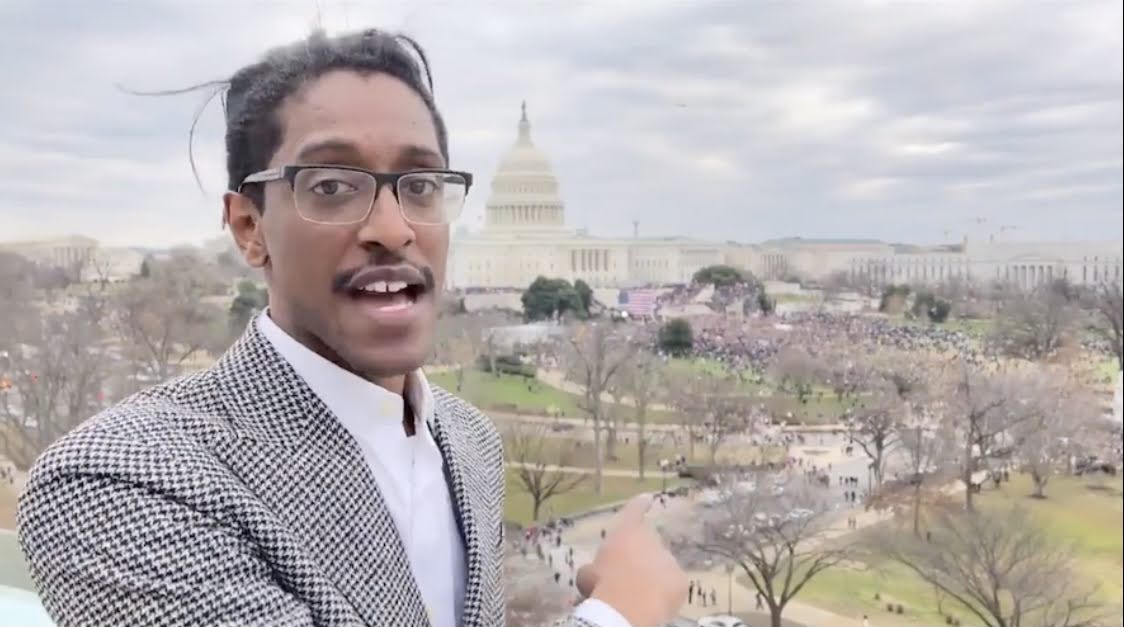 Upset He Got Caught, Ali Alexander Denies Video of Him Encouraging ‘Rebellion’

Trump loyalists were storming up the U.S. Capitol steps, fighting with police, when the far-right leader of the Stop the Steal campaign, Ali Alexander, left the Capitol steps for the terrace of One America News Network’s building on Constitution Ave. Overlooking the Capitol, Alexander pointed to the Trump loyalists streaming across the Capitol grounds, past barricades and overrunning police, before turning to the camera.

“This is we the people,” he said. “Now, I want to say something. I don’t disavow this. I do not denounce this.”

“This is completely peaceful, looks like, so far,” Alexander added, though he had seen the violence up close. “And there are a couple of agitators that I obviously don’t endorse.”

In conclusion, he told his followers, “StoptheSteal.us is going to be the home of the rebellion against an illegitimate government.”

This Right Wing Watch reporter captured that video, which was posted on the Stop the Steal Twitter account by Alexander’s associate Michael Coudrey at 4:26 p.m. on Jan. 6, 2021.

Now, a year later, Alexander is claiming that the video is “basically a deep fake,” telling OAN’s John Himes on Dec. 13 that “Twitter trolls” targeted him, causing him to lose everything and setting up the House select committee investigating the attack on the Capitol to come after him.

Alexander was introduced as an organizer claiming to be targeted by the Jan. 6 committee “simply because he’s a conservative.”

“And now, I’m being investigated by the select committee that says, ‘You refused to denounce this, you supported the violence, look where you said 1776 here.’ And now, I’m, I’m basically on trial for supporting America’s founding!” Alexander protested.

This is Ali Alexander, leader of the so-called Stop the Steal campaign, saying: “I don’t disavow this. I do not denounce this.” pic.twitter.com/0mP0xThAYP

Presumably, Alexander or Coudrey has a copy of the original video they posted that day and could prove such claims by simply releasing it. The fact that they haven’t done so is telling.

Alexander may be frustrated by his own choice of words on OANN’s terrace on Jan. 6 because he got caught—“rebellion,” after all, isn’t peaceful—but that doesn’t make them any less true.

And Alexander’s message on Jan. 6 is entirely in keeping with what he had been saying in the days and months leading up to the insurrection.

Alexander launched the so-called Stop the Steal campaign just days after the 2020 presidential election as then-President Donald Trump began to slip in the vote counts; both he and Jack Posobiec had floated the idea of rebooting the campaign earlier in the fall as reality began to set in among right-wing activists that Trump could well lose the presidency.

At the basis of the campaign was the Big Lie—the false narrative that the election was stolen from Trump. Calls for “rebellion” and “revolution” were ubiquitous at Stop the Steal rallies, as were attacks on election officials and Republicans who stood in the way. Violence broke out after two large rallies held in Washington, D.C., in November and December, with the Proud Boys hate group roaming the streets looking to brawl with counterprotesters or antifascist activists, and Alexander telling the Proud Boys that he was “Proud of my dudes.”

Alexander had spent the night prior to the insurrection hosting a Stop the Steal rally at Freedom Plaza, where threats of violence, Christian nationalism, and conspiracy theories mixed in a toxic brew on stage. The message, Right Wing Watch’s Peter Montgomery reported at the time, was clear: Congress needs to reject Biden electors—or else.

“I want them to know 1776 is always an option,” Alexander said. “Our government should be afraid.”

In the wee hours of Jan. 6, Alexander took to Twitter to declare it the “First official day of the rebellion.”

It wasn’t just talk. Supporters of Trump at the Capitol that day embraced the rhetoric and thought they were carrying out the second American Revolution. “We’re walking down the same exact path as the Founding Fathers,” said Stewart Rhodes, founder of the right-wing extremist Oath Keepers group, who had spoken at one Stop the Steal rally and threatened a “much more bloody war.” Andrew Wrigley, 51, from Philadelphia, waved a 1776 flag as he breached the Capitol.

Unsurprisingly, the House select committee investigating the Jan. 6 attack found the whole of Alexander’s words troubling and issued a subpoena for his testimony in October.

Alexander testified in an 8-hour closed-door hearing on Dec. 9. In a draft of his opening statement, which was leaked to the New York Times, he denied having anything to “do with any violence or lawbreaking that happened on January 6,” claimed to have tried to deescalate the violence, and opted to throw Jan. 6 “Save America” rally organizers Amy Kremer, Kylie Kremer, and Katrina Pierson under the bus. After the hearing, he took to Telegram to complain that he faced “8 hours of accusations, lies, and conspiracy theories digging into my First Amendment rights.”

For now, it appears Alexander is somewhat cooperating with the select committee. Alexander confirmed to congressional investigators that ahead of Jan. 6, he had communicated with several GOP congressmen—Reps. Paul Gosar, Mo Brooks, and Andy Biggs—as well as with Kimberly Guilfoyle, Donald Trump Jr. girlfriend and member of Trump’s inner circle. Still, his legal team launched a lawsuit against the panel and Verizon on Dec. 17 in an effort to prevent investigators from obtaining his phone records.

Alexander isn’t apologetic, he just appears to be mad he got caught. A year to the day of the insurrection, Alexander took to Telegram to promote his friend Alex Bruesewitz, a fellow Stop the Steal organizer, who is seeking donations to “combat political prosecutions resulting from January 6th.”