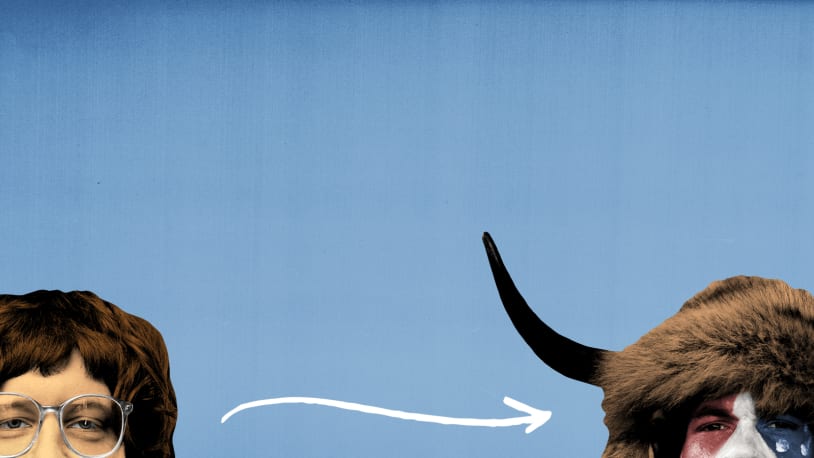 The Capitol riot’s roots in the New Left

They say imitation is the sincerest form of flattery. If that’s right, the assorted fanatics, thrill-seekers, and nutjobs who stormed the Capitol one year ago today have surprising precursors.

The respectable backgrounds of many of the rioters didn’t look much like the “peasant army” that populist commentator Patrick Buchanan threatened to lead against the political establishment in the 1990s. Nor were their anarchic tactics reminiscent of the highly organized “suburban warriors” who flocked to Reagan. More than the public faces of the postwar American right, the theatrical flair, indifference to law and constituted authority, and threat of serious violence on display last Jan. 6 resemble the New Left of the 1960s and 1970s. The defiant, moralistic, revolutionary spirit that animated the Yippies, Weathermen, and Black Panthers hasn’t disappeared — but it now lives on the right, too.

Such a migration would have seemed improbable half a century ago. In the popular imagination, the period pitted long-haired radicals against a staid majority. Conservatives wore neckties and followed the rules. The younger activists who emerged from the civil rights and antiwar movements practiced free love, fought the police, and occasionally set off bombs. Unlike the union-allied “old Left”, moreover, the newer generation had little interest in promoting the material prosperity of industrial workers, whom they saw as complicit in capitalism, or in winning elections. “We shall not defeat Amerika [sic] by organizing a political party,” Abbie Hoffman proclaimed in a blend of menace and humor that was once distinctive, but now has become disturbingly familiar. “We shall do it by building a new nation — a nation as rugged as the marijuana leaf.”

Liberal institutions have assimilated these defiant gestures into the self-congratulatory epic of the Baby Boomers. In the recent Netflix production The Trial of the Chicago 7, director Aaron Sorkin depicted Hoffman and his contemporaries as chatty idealists subject to official repression. Angela Davis — who supplied guns to militants who murdered a judge and took hostages in a California courtroom and cavorted with Communist leaders in Cuba, East Germany, and the Soviet Union — has become thoroughly respectable. Last November, she was the guest of honor at a “diversity summit” organized by the university where I teach.

Conservatives preserve a better memory of how extreme these figures were. That’s why names like Bill Ayers, who founded the terrorist group Weather Underground, and Herbert Marcuse, who taught Davis philosophy, and Saul Alinsky, who tried (unsuccessfully) to reconcile the old and new lefts, acquired prominent positions in the demonology of the right. According to writers like Newt Gingrich, Norman Podhoretz, and Mark Levin — as well as less famous talk shows, bloggers, and social media influencers — the modern Democratic Party is little more than a vehicle for the New Left aspiration to fundamentally transform America.

Especially in more lurid versions, such assertions are easy to dismiss as conspiracy theories or guilt by association. What critics tend to miss, though, is that they’re inspired by envy as well as revulsion. Conservative writers and activists are almost unanimous in rejecting the New Left’s goals. But many see them as authors of a how-to guide for imposing an unpopular and disruptive agenda on an initially recalcitrant majority. The flamboyance, militance, and violence of the 1960s left might not have worked right away, after all. In the long run, though, ideas about social justice, national guilt, and sexual freedom that seemed bizarre and dangerous at the time are now thoroughly mainstream features of American life.

This isn’t just a historical argument. Even as they denounced the violence and destruction, conservative activists could see the rioting that swept the country after the death of George Floyd in spring of 2020 as offering both permission and a model for the outbursts that culminated at the Capitol on Jan. 6, 2021. When it came to criminal justice, violence inspired by factually dubious assertions promulgated by ideologically radical groups was not just excused, but celebrated by the media, cultural, and to some extent political establishment. If the ends justified the means for those seeking to transform America, why couldn’t they do the same for those seeking to preserve it?

Probably few of the actual rioters consciously associated their conduct with the leftism of another time. Many and perhaps most genuinely believed that Trump was the victim of massive, outcome-changing electoral fraud. But some of those responsible for propagating that fantasy knew exactly what they were doing. The writer and organizer David Horowitz, who has made a career out of his transition from the New Left to MAGA, helped launch Steve Bannon and used his own platform to promote conspiracy theories about the election. As his contemporaries and former allies Ron Radosh and Sol Stern noted in The New Republic, Horowitz’ conception of domestic politics war against an implacable foe “may sound daring and original to Trump’s followers, but it’s really a reprise of his earlier support for the revolutionary left’s strategy of ‘bringing the war home’ to America’s streets and campuses.”

Similar ideas have found advocates without Horowitz’s biographical connection to the New Left. Figures associated with the influential Claremont Institute have also adopted the rhetoric of incipient war against a fundamentally hostile “regime” that is, regrettably, accepted by most of their fellow citizens. Despite the appeals to patriotism and solidarity, these aren’t the politics of Richard Nixon’s “silent majority.” As Matt Lewis has described, the newer, weirder right that made its public debut on Jan. 6 doesn’t look much like the staid conservatism of even a decade ago. It more closely resembles the gonzo nihilism of Abby Hoffman and his comrades, who hoped to tear down “Amerika” in order to replace it with a hazy utopia.

Such dreams are almost always disappointed, though. For all their success in changing how Americans thought about race and sex, the New Left never managed to shake the capitalist economy that was its real foe. That’s why major corporations are among the most lavish promoters of the social progressivism conservatives abhor.

In a remarkable irony, socialist journalist Christian Parenti recently tracked down the author of the first written account of a “privilege walk” — an ostensibly anti-oppression training exercise developed by Herbet Marcuse’s graduate student and third wife that’s become a staple of the corporate diversity industry. She’s now a Mark Levin fan and a Republican voter who believes Trump is the only things that stands between us and totalitarian control. Fifty years ago, a toxic brew of paranoia, Manicheanism, and rejection of legal and constitutional restraint left a trail of bodies, ruined lives, and corrupted institutions that discredited the left for a generation or more. A year after 1/6, it’s still too early to know what disasters it threatens for the right–and the country as a whole.

They say imitation is the sincerest form of flattery. If that’s right, the assorted fanatics, thrill-seekers, and nutjobs who stormed the Capitol one year ago today have surprising precursors. The respectable backgrounds of many of the rioters didn’t look much like the “peasant army” that populist commentator Patrick Buchanan threatened to lead against the political establishment…

They say imitation is the sincerest form of flattery. If that’s right, the assorted fanatics, thrill-seekers, and nutjobs who stormed the Capitol one year ago today have surprising precursors. The respectable backgrounds of many of the rioters didn’t look much like the “peasant army” that populist commentator Patrick Buchanan threatened to lead against the political establishment…