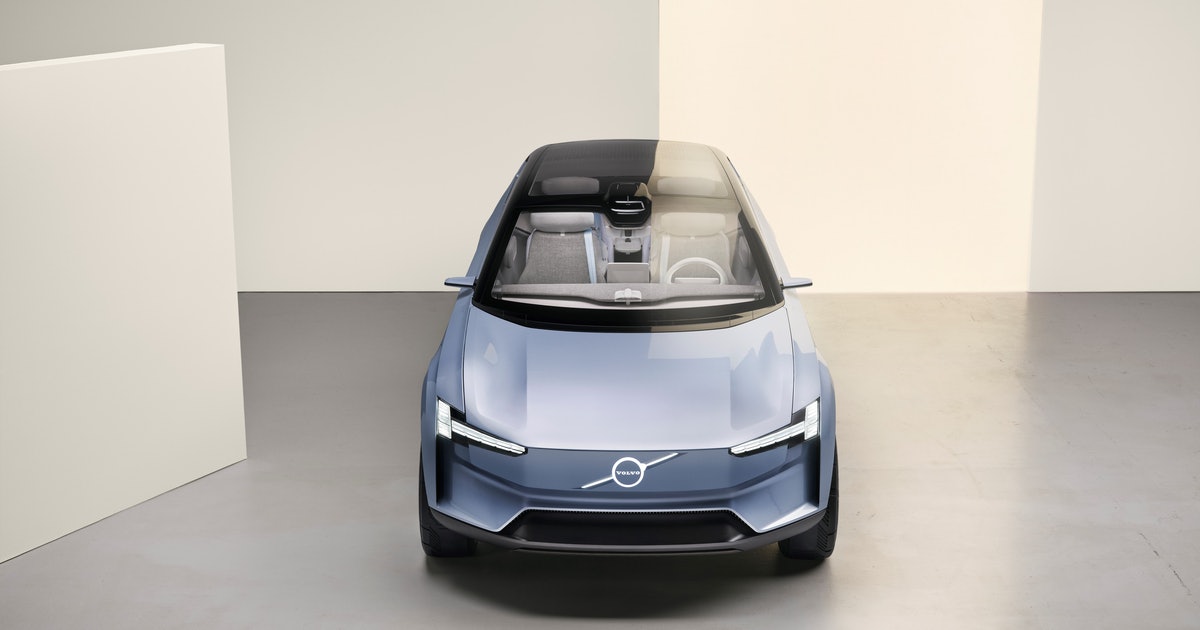 Volvo’s new flagship EV is going to pack more than just a bunch of batteries. The Swedish carmaker is installing a lidar sensor as standard equipment — and it’s going to allow for some really advanced self-driving and safety tech.

The new car, which is expected to be a replacement for the Volvo XC90, will be revealed later this year and may look like the Concept Recharge vehicle the company showed off in 2021. And as the new flagship, it’ll be filled with Volvo’s latest and greatest tech, including something called Ride Pilot that can do something big that Tesla’s Autopilot can’t.

What it means — Made possible by the addition of the Iris lidar sensor from Luminar, Ride Pilot will allow fully autonomous, hands-free driving on certain roads in certain traffic conditions.

While specifics aren’t yet available, a Volvo executive explained how the new Volvo EV will be able to completely take over control of the vehicle at low speeds on highways.

“It will be fully self-driving,” Martin Kristensson, Volvo’s head of autonomous driving and mobility, tells Inverse. “You as the driver will not need to keep your eyes on the road. You’ll be able to eat breakfast, read a book, or watch a movie.”

Drivers will even be able to watch YouTube on the in-car screen while the car drives, thanks to a new integration the company announced was coming to its cars running Google Automotive.

“From a strategic point of view, it’s ambitious to make [lidar] standard” in a vehicle, explained Anne-Mette Nygaard Lindblad, Volvo’s head of consumer offers, in an interview with Inverse. “It’s a strong position on our promise of safety.”

Why it’s a big deal — It’s not just new autonomous features that will be improved by the addition of the forward-facing lidar. The sensor will join five radars, eight cameras, and 16 ultrasonic sensors for a variety of safety systems like automatic emergency braking, pedestrian and large animal detection, and Level 2 driver assist systems like Volvo’s current Pilot Assist feature.

Pilot Assist requires the driver to still pay attention to the road (like Tesla’s Autopilot), but the car can help steer itself down the road for brief hands-free periods. However, neither the Volvo nor Tesla systems are designed to detect and act on stationary objects like fire trucks or construction equipment stopped in the road. In fact, they’re specifically built to ignore unmoving obstacles.

Radar works by sending out electromagnetic waves that are then reflected back by objects ahead, like the vehicle in front of you or, crucially, bits of metal on the road like a crunched-up aluminum soda can. The problem is that radar is low-resolution; to a radar system, that can of coke in the road can look exactly like a stopped fire truck. Because the car can’t be sure what’s in front of it, it discards this information to avoid a dangerous panic stop for no reason.

“Putting lidar standard in the car will save lives.”

However, by adding a lidar sensor to its existing system, Volvo will be able to dramatically improve the car’s view of the world and it should be able to automatically detect and stop for the aforementioned fire truck in the road.

“Putting lidar standard in the car will save lives,” says Kristensson. If Volvo weren’t coming out with a system like Ride Pilot, lidar would still improve safety, he explained. “What’s the price of safety? In theory, we would put the lidar on the car anyhow. We’re Volvo and safety is very dear to us.”

Without the lidar allowing for new features, “it would be more of a discussion with finance and the business side. Now it’s easier,” Kristensson says.

Taking on Tesla — Taking a subtle shot at Tesla’s choice of Autopilot for its semi-autonomous driving system, the Volvo press release notes:

The name ‘Ride Pilot’ implies what the driver can expect: when the car is driving on its own, Volvo Cars takes responsibility for the driving, offering the driver comfort and peace of mind.

Mercedes-Benz recently received approval from Germany for a similar system called Drive Pilot that allows the car to take control over from the driver at speeds below 37 mph in heavy traffic.

The new electric Volvo SUV will be revealed later this year, while Ride Pilot will launch to California customers once the software is tested and complete and the company receives the proper approvals from regulators. It’ll be available in the rest of the world after.

For more on new Volvos and all the other exciting new vehicles on the market, sign up for Jordan Golson’s free car reviews newsletter on Substack.

Volvo’s new flagship EV is going to pack more than just a bunch of batteries. The Swedish carmaker is installing a lidar sensor as standard equipment — and it’s going to allow for some really advanced self-driving and safety tech. The new car, which is expected to be a replacement for the Volvo XC90, will…

Volvo’s new flagship EV is going to pack more than just a bunch of batteries. The Swedish carmaker is installing a lidar sensor as standard equipment — and it’s going to allow for some really advanced self-driving and safety tech. The new car, which is expected to be a replacement for the Volvo XC90, will…