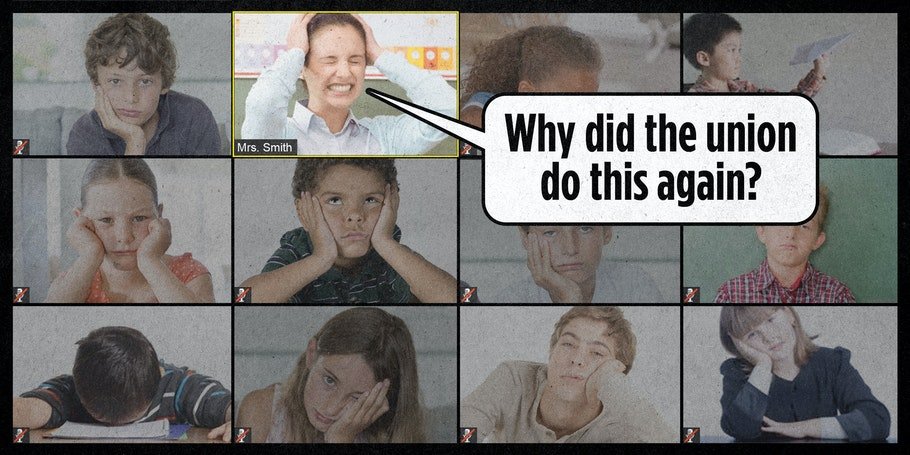 The Folly of School Closures

Around the nation, kids are being sent back home for virtual “learning.”

When the coronavirus pandemic first escaped that Wuhan lab and hit American shores, mid-March 2020 marked the beginning of 15 days to flatten the curve. That meant shutting down most of society, including schools, to slow the spread of COVID-19 and allow hospitals the time to prepare. It soon became apparent that lockdowns did more harm than good, perhaps especially for schoolchildren left to stare at computer screens instead of being in the classroom. Almost two years later, even Democrats and the Leftmedia know better than to shut down schools. Teachers unions are still stubbornly doing it anyway.

Chicago Public Schools are closed today after the teachers union voted last night (73% approving) to return to remote learning. So, after two days back in the classroom, parents of the 340,000 kids in the nation’s third-largest district are left scrambling to accommodate having their children back at home in front of a screen. But hey, at least the union did it with “a heavy heart and a singular focus on student and community safety.”

The singular purpose of a union is to advance the interests of its members. This is no different.

Patriot Post National Advisory Board member Barbara James, who is also a highly respected teacher, made the case in our pages back in November 2020 that virtual learning is detrimental to children. “Our children will have lost months of education, growth, natural curiosity and discovery, and personal interactions,” James wrote. “The pandemic interruption will require student triage for years to come.”

Even more so because, two years later, it keeps happening.

It’s not just Chicago. More than 450,000 students in cities from Newark to Atlanta to Milwaukee to Cleveland will be stuck at home again. The debate is roiling elsewhere, with unions clamoring to close while even Democrat officials are fighting to keep kids in school.

“This is traumatizing our children,” said newly inaugurated New York City Mayor Eric Adams, who aims to have open schools. “The way adults are responding to COVID is having a negative impact on our children. … The safest place for children right now is in a school building. … Strand after strand, we can’t continue to stop our children from developing socially and academically.”

Chicago Mayor Lori Lightfoot sounded a similar theme, saying, “I want to assure you that I am doing everything in my power to keep our students in school, where they belong, learning.”

Joe “Shut Down the Virus” Biden likewise wants schools open: “We know that our kids can be safe when in school. … That’s why I believe schools should remain open.”

Heck, even Anthony Fauci agrees: “It’s safe enough to get those kids back to school, balanced against the deleterious effects of keeping them out.”

The New York Times actually put it quite well: “For the past two years, Americans have accepted more harm to children in exchange for less harm to adults.”

Don’t get us wrong; we’re old enough to remember when Democrats and the media lectured and mocked conservatives for saying schools ought to be open. It’s still nice to see them come around.

On the bright side, we suppose that virtual learning might prepare kids for remote jobs in the future, as the economy faces permanent changes brought by the pandemic.

Meanwhile, things are little better in the nation’s colleges and universities. “Students are the lowest-risk population on planet Earth,” says Johns Hopkins expert Marty Makary. “Over the last six months, the risk of a person in the broader age group (15-24) dying of COVID or dying with COVID (the CDC does not clearly distinguish) was 0.001%. All or nearly all of those deaths were in a very specific subgroup: unvaccinated people with a medical comorbidity.”

Nevertheless, academia, supposedly run by really intelligent people, continues doing very stupid things. Makary points to Georgetown, Princeton, Cornell, and others as bad examples for maintaining rigorous mask and vaccine mandates on top of long, one-size-fits-all quarantines. It’s even more foolish, he says, in the midst of the highly contagious but incredibly mild Omicron strain sweeping the country. Rather than embrace the natural immunity it confers, which might just bring the pandemic’s end closer, schools at every level are leading the way in responding with panic and fear.

Worst of all, this response is what students from kindergarten through graduate school are learning. The consequences will last for decades.

By NATE JACKSON  January 5, 2022 in Education Around the nation, kids are being sent back home for virtual “learning.” When the coronavirus pandemic first escaped that Wuhan lab and hit American shores, mid-March 2020 marked the beginning of 15 days to flatten the curve. That meant shutting down most of society, including schools, to slow…

By NATE JACKSON  January 5, 2022 in Education Around the nation, kids are being sent back home for virtual “learning.” When the coronavirus pandemic first escaped that Wuhan lab and hit American shores, mid-March 2020 marked the beginning of 15 days to flatten the curve. That meant shutting down most of society, including schools, to slow…