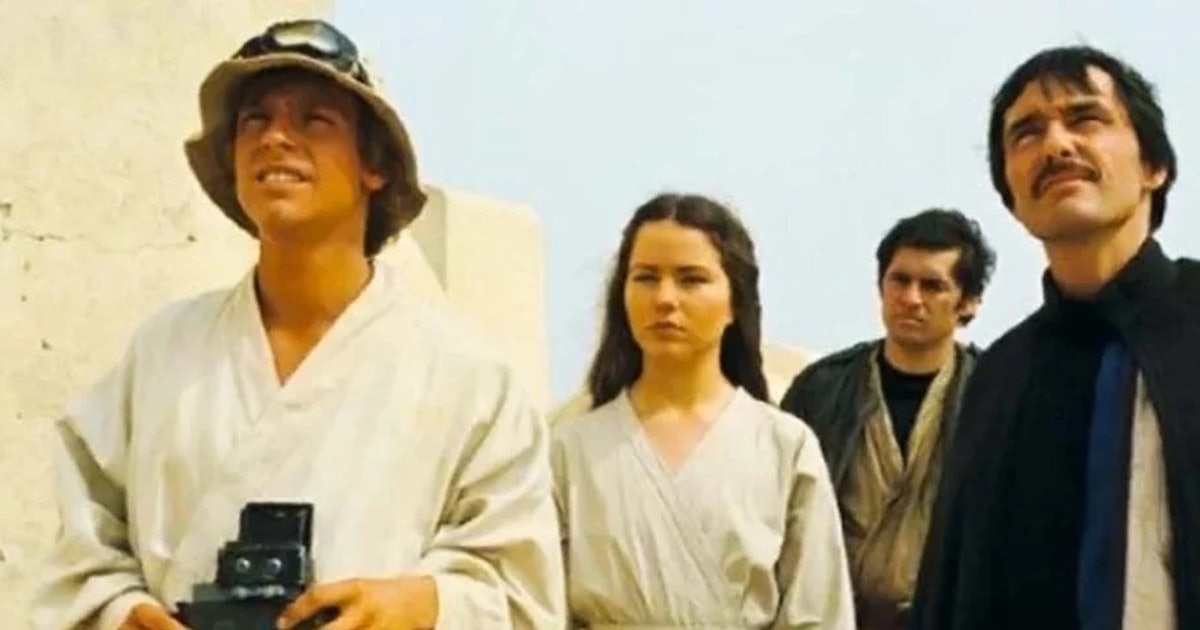 Boba Fett doesn’t need any power converters. After a lot of fan speculation, the second episode of The Book of Boba Fett — “The Tribes of Tatooine” — finally revealed Luke Skywalker’s old hangout, the Tosche Station. And in doing so, the series dropped a blink-and-you’ll-miss-it Easter egg. Although they’re not named, and barely appear in the episode at all, the two humans Boba Fett leaves alone at the Tosche Station are Luke Skywalker’s best friends from his Tatooine days, Camie and Fixer. Here’s who they are and why that small Boba Fett scene was fairly big for Star Wars canon. Spoilers ahead for The Book of Boba Fett Chapter 2, “The Tribes of Tatooine.”

Who are Camie and Fixer?

In “The Tribes of Tatooine,” we see Boba Fett follow the swoop bike gang to the Tosche Station. It’s never confirmed to be the Tosche Station in dialogue, but the visual evidence of the door matches the same location Luke Skywalker entered in a deleted scene from the very first Star Wars film in 1977. Back before Star Wars was called “Episode IV” or “A New Hope,” Lucas’ original story included more background on Luke’s social life before he met R2-D2 and C-3PO. In an infamous deleted scene, Luke observes the Star Destroyer Devastator overtake the blockade runner Tantive IV in his macrobinoculars. He immediately tells his friends Camie (Koo Stark) and Fixer (Anthony Forest), who don’t believe him. Later, however, Biggs Darklighter, while visiting Tatooine, does believe Luke.

Basically, Camie and Fixer were a couple who hung out at Tosche Station and were around Luke’s age during the events of A New Hope. They call Luke “Wormie,” and generally represent the kind of small-town life Luke would have had if he’d stayed on Tatooine. In the 2018 Last Jedi novelization, Luke Skywalker even dreams about a life in which he married Camie, and never left his home planet. But, in the 1977 release of the film, Koo Stark and Anthony Forest were lost on the cutting room floor. Because Camie was written as Luke’s teenage crush, this makes her possibly the most famous person in Star Wars who was never seen in Star Wars.

By including Camie and Fixer in a live-action scene, The Book of Boba Fett oddly gives these very old characters their first, and so far, only canonical appearance on screen. Although Camie and Fixer appear in various Star Wars ephemera beyond their deleted scenes — including the 1981 Star Wars Radio Drama, the Marvel Comics adaptation of the first film, and 1976 novelization by Alan Dean Foster — those glimpses, as well as Luke’s dream in The Last Jedi novelization, have been considered fairly borderline in terms of real canon.

Even Wookieepedia considered Camie’s only backstory “partially canonized,” prior to this episode of Boba Fett. But, now that Camie and Fixer have actually appeared in The Book of Boba Fett, one hazy aspect of Luke’s past just became clearer.

The irony of Boba Fett rescuing Fixer and Camie

The casual fan will probably never even know the identity of Camie and Fixer in this episode of Boba Fett, which, in some ways, is perfect. If you didn’t watch all the way to the end credits, or you didn’t have the subtitles on, or you didn’t somehow recognize the tunic worn by Camie in this episode (and didn’t just assume it was some regular Tatooine fashion) you’d probably never have noticed this very, very deep cut.

Which is exactly the way Boba Fett experiences it. He has no idea who Camie and Fixer are and doesn’t care. He’s there to take care of the swoop bike gang, steal their bikes, and leave. He isn’t interested in hanging out at the Tosche Station at all. What Boba Fett doesn’t know, is that these two people were basically childhood friends with the guy who was partially responsible for sending him into the Sarlacc; Luke Skywalker. And, of course, Camie and Fixer probably have no clue that Boba Fett hunted Luke’s friend Han Solo, nor do they know that Luke was actually in town very recently, blowing up a sail barge.

The Tusken-centric flashbacks in The Book of Boba Fett take place right after the events of the first part of Return of the Jedi. That means Boba Fett enters the Tosche Station sometime either during the events of the rest of Return of the Jedi or in the months and weeks right after. Either way, we’re right in the midst of the classic trilogy’s climax with these flashbacks, and the Easter egg of Luke’s BFFs from A New Hope is a good indication of the chronology. The Book of Boba Fett may be looking forward in its present-tense action, but cameos like this are a reminder of what this show really is: A Star Wars period piece, through and through.

The Book of Boba Fett is airing now on Disney+.

Boba Fett doesn’t need any power converters. After a lot of fan speculation, the second episode of The Book of Boba Fett — “The Tribes of Tatooine” — finally revealed Luke Skywalker’s old hangout, the Tosche Station. And in doing so, the series dropped a blink-and-you’ll-miss-it Easter egg. Although they’re not named, and barely appear…

Boba Fett doesn’t need any power converters. After a lot of fan speculation, the second episode of The Book of Boba Fett — “The Tribes of Tatooine” — finally revealed Luke Skywalker’s old hangout, the Tosche Station. And in doing so, the series dropped a blink-and-you’ll-miss-it Easter egg. Although they’re not named, and barely appear…