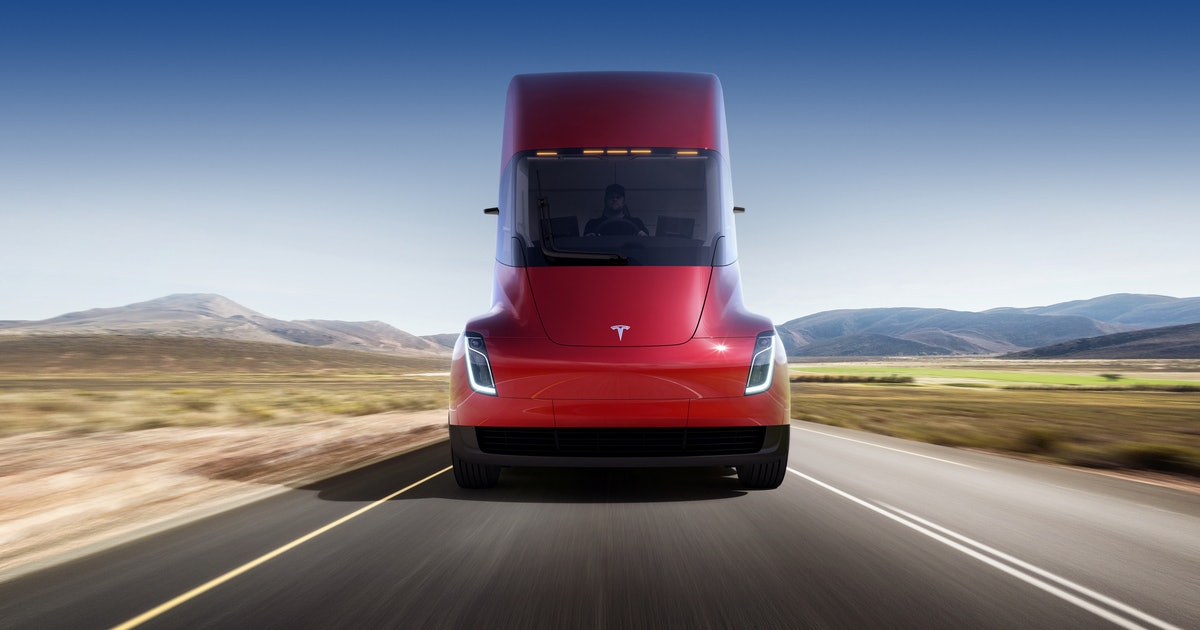 First announced in 2017, the all-electric truck is the company’s first foray into non-consumer vehicles. It’s expected to cover most existing journeys currently undertaken by diesel trucks, with some welcome improvements like a central seating position and dual touchscreens. While relatively elusive since its 2017 debut, evidence suggests it could launch soon.

It could be the next step in CEO Elon Musk’s overall goal to transition the world to sustainable energy. The company’s 2020 impact report explained that combination trucks account for just 1.1 percent of the U.S. vehicle fleet, but account for 17 percent of the fleet’s emissions. Electrifying trucks could tackle a major source of emissions.

But it’ll face competition from the likes of Kenworth, Freightliner, and Geely. As Tesla gears up to launch its Semi truck, it could find itself in a rather crowded marketplace — much more crowded than when the truck was first unveiled back in 2017.

Want to find out more about Tesla’s plans to electrify transport? Subscribe to MUSK READS+ for exclusive interviews and analysis about spaceflight, electric cars, and more.

As Tesla gears up to launch its truck, here’s what you need to know.

When will Tesla Semis be on the road?

The big question. The Tesla Semi was announced in 2017 with a 2020 launch date. But in the company’s second-quarter 2021 earnings report, it announced that production would be pushed back to 2022 “to better focus on these factories, and due to the limited availability of battery cells and global supply chain challenges.”

At the October 2021 shareholders’ meeting, Musk went further. He said that “hopefully” Tesla will be producing the Semi and the second-generation Roadster in 2023.

But earlier this month, PepsiCo CEO Ramon Laguarta suggested it could launch sooner than expected. Speaking from the COP26 climate change summit in Scotland, Laguarta said that it would receive the first of its 100-truck order “this Q4.”

How much does a Tesla Semi cost?

The company asks for a base reservation of $20,000. From there, Tesla’s website lists the following prices:

The Tesla Semi may sound expensive, but Tesla claims that the truck could offer fuel savings of over $200,000 and a two-year payback period. It is unclear, however, how the company arrived at these figures.

It is also unconfirmed whether Tesla charges the same price to companies placing bulk orders.

What is the Tesla Semi range?

The Tesla Semi lists a range of either 300 or 500 miles depending on the model. Musk claimed at the unveiling that 80 percent of U.S. trucking routes are 250 miles or fewer.

Note that these figures remain unchanged from the truck’s unveiling in 2017. It is unclear whether Tesla’s September 2020 Battery Day announcements, where the company detailed new batteries with a 54 percent increase in battery range, will change these figures.

In November 2020, Musk suggested the Semi could offer an even better range. Speaking at the European Battery Conference, Teslarati reported that Musk said (bolded for emphasis):

“Getting a range of 500 km [310 miles] is I think, quite easy. And this is assuming a truck that is pulling a load of something in the order of 40 metric tons. So that’s a heavy truck. For long-range trucking, up to, we think, easily 800 kilometers [500 miles], and we see a path over time, to get to about 1,000 kilometers [620 miles] of range. We think this is going to be extremely competitive and compelling to trucking companies.”

This would beat the Tesla Model S, which currently has the best range in the company’s lineup at just 405 miles.

What is the Tesla Semi top speed?

Tesla has not revealed the top speed of the truck. Its website does reveal, however, that the truck can reach a speed of 60 mph at a five percent grade slope. At the truck’s unveiling, this figure was 65 mph, but it was revised downwards after the event.

By comparison, Musk claimed at the event that a similar truck can reach 45 mph.

Beyond this, the truck also achieves a 0 to 60 mph acceleration time of 20 seconds. It uses four independent motors on rear axles to reach these times, plus a drag coefficient of just 0.36 that helps it glide through the air.

What is the payload of the Tesla Semi?

In August 2021, Tesla’s 2020 impact report explained that the truck payload would be “at least as high as it would be for a diesel truck.”

It also explained that U.S. rules allow electric trucks to be 2,000 pounds heavier than diesel equivalents when loaded. For the EU, rules allow two tons (around 4,400 pounds) of extra load.

What are the rivals to the Tesla Semi?

A number of companies have unveiled rivals to the Tesla Semi. Data from ACT Research shows 281 battery-powered commercial trucks are expected to launch through 2024.

In November 2021, Chinese firm Geely unveiled the Homtruck. The truck comes from Geely’s commercial unit vehicle, Farizon Auto, and is set to hit roads in 2024. It’s designed for autonomy, similar to all Tesla’s vehicles. Geely hopes to introduce partial autonomy features by 2026 before reaching full autonomy by 2030.

The Homtruck differentiates itself by offering a series of comfort features. It includes a refrigerator, bathroom with a shower, a kitchen, a washing machine, and more. It offers a range of powertrain options alongside full electric, and the electric option includes a battery swap feature.

Beyond Geely, Freightliner is also developing the eCascadia Class 8 truck. This offers battery range of up to 250 miles, recharge times of 80 percent in 90 minutes, and between 360 to 500 horsepower. Combined with the smaller eM2, Freightliner’s all-electric trucks have racked up over a million miles in real-world operations.

Others are also developing all-electric trucks:

Utah-based electric truck developer Nikola also demonstrated a series of zero-emissions vehicles during the Semi’s development, but scandals have shaken its credibility. In July, the U.S. Department of Justice charged former CEO Trevor Milton with making false and misleading statements about the company’s technology.

It could shake off its tarnished reputation in the future, as new CEO Mark Russell struck a series of deals in 2021 to bring its fuel cell semi-trucks to the road. Dan Ives, an equity analyst for Wedbush Securities, told Forbes that “Nikola has done a commendable job the last six months with this flurry of partnerships.”

Nikola aims to deliver its battery-powered Tre truck, with up to 350 miles of range, by the end of 2021.

While impressive, these rivals may struggle against Tesla — if it can deliver on its promises of 500 miles of range.

The Tesla Semi faces some tough competition. First announced in 2017, the all-electric truck is the company’s first foray into non-consumer vehicles. It’s expected to cover most existing journeys currently undertaken by diesel trucks, with some welcome improvements like a central seating position and dual touchscreens. While relatively elusive since its 2017 debut, evidence suggests…

The Tesla Semi faces some tough competition. First announced in 2017, the all-electric truck is the company’s first foray into non-consumer vehicles. It’s expected to cover most existing journeys currently undertaken by diesel trucks, with some welcome improvements like a central seating position and dual touchscreens. While relatively elusive since its 2017 debut, evidence suggests…

Should you worry about “flurona”? No, but here are 3 vital questions, answered