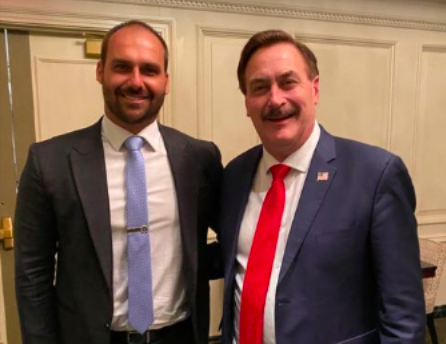 Mike Lindell, MyPillow Guy persona and sugar daddy to right-wing media personalities, sat down for a dinner with three others at the Ritz Carlton Hotel in Pentagon City in Arlington, Virginia—a short drive from Washington, D.C., just across the Potomac River. The date was Jan. 5, 2021. Among those at his table was Eduardo Bolsonaro, a member of the National Congress of Brazil and eldest son of Brazil’s Trumpian president, Jair Bolsonaro.

A new report from the nonprofit research organization Advance Democracy, Inc., details Eduardo Bolsonaro’s movements in Washington, D.C., ahead of and following the Jan. 6 attack on the U.S. Capitol as he met with right-wing movement leaders and members of Trump’s inner circle. Though much of Bolsonaro’s movements have been reported in Brazilian media, Brazilian connections to Jan. 6 movement leaders have been largely overlooked in U.S. media.

But as Brazil’s own October 2022 national elections fast approach, Eduardo Bolsonaro’s meetings ahead of the Jan. 6 attack on the U.S. Capitol highlight the close relationship between figures in extreme right-wing movements in Brazil and the United States—and a hunger to recreate former President Donald Trump’s campaign to hang on to power.

President Jair Bolsonaro has already recreated some aspects of that campaign, sowing doubt in the electoral process and attacking branches of government that stand in his way—in his case, the judiciary, which has opened investigations into potential crimes by his campaign against Brazil’s voting system.

Between his denialist handling of Brazil’s brutal experience of COVID-19 (620,000 deaths so far) and its impact on the economy, Bolsonaro has seen his approval rating drop as low as 19 percent, and he faces a likely campaign challenge from the immensely popular leftist former president, Luiz Inácio Lula da Silva, who left office in 2010. Bolsonaro has aligned himself with the police and military, parading military tanks through the capital in August as Congress considered a Bolsonaro-backed bill to overhaul the voting system, presumably to be more advantageous to his political fortunes. Ahead of Brazil’s independence day celebration on Sept. 7, Bolsonaro shared a private Whatsapp message calling for a mass demonstration in support of a “quite probable and necessary countercoup” against the Brazilian judiciary and Congress, implying that the powers exercised by those institutions were somehow illegitimate.

“There’s absolutely an appetite for a Jan. 6-style insurrection if the election does not go Bolsonaro’s way—which according to polls today, it will not go his way,” Andre Pagliarini, an assistant professor of Brazilian history at Hampden Sydney College, told Right Wing Watch. “According to polls today, he will lose resoundingly.”

If that’s the case, the far-right president’s eldest son appears to have gotten an inside glimpse of how far-right actors in the U.S. were able to stage their own attack on Congress—or at the very least set the conditions for such an attack to occur.

The Bolsonaros have received the support of significant players in the U.S. right-wing movement since Jair Bolsonaro launched his presidential campaign in 2018, with U.S. religious-right figures, including former Rep. Michelle Bachmann and Mario Bramnick offering their praise, and former Trump adviser Steve Bannon joining Bolsonaro’s campaign as an adviser.

Eduardo Bolsonaro appears to be his father’s vessel for establishing ties with the American right, making trips to the U.S. to meet with the Trumps as well as Bannon, whom the younger Bolsonaro has said shares “the same worldview.” In 2019, Eduardo Bolsonaro joined The Movement—Bannon’s effort to elect far-right populist parties across the globe—as the representative of South America. That support continues to this day with Bannon keen, according to Pagliarini, on turning Brazil “into the next MAGA battleground.”

Arriving in Washington, D.C., on Jan. 4, Eduardo Bolsonaro met with then-presidential adviser and first daughter Ivanka Trump at the White House. Bolsonaro’s wife billed the trip as last minute, yet claimed her husband had an “official agenda.” Meanwhile, the Brazilian embassy claimed to have been uninformed of the younger Bolsonaro’s agenda, telling Brazilian news outlet Publica that Brazil’s diplomats “did not participate in its planning.” However, a video posted on Twitter by journalist Raquel Krähenbühl shows the Brazilian congressman, his wife and infant daughter, together with Nestor Forster, Brazil’s ambassador to the U.S., entering the White House. A photo taken at the meeting emerged on Jan. 5 on Bolsonaro’s Instagram, showing Ivanka holding his infant daughter, flanked by Bolsonaro and his wife. “Aunt Ivanka took her in her arms,” Bolsonaro’s wife posted on social media, as reported by O Globo. “It’s already the second official residence she knows.”

The next day, Eduardo continued his tour of meetings with Trump allies and extremists. He attended the aforementioned dinner with election conspiracy theorist Mike Lindell, California businessman Joseph Lam, and a third unidentified individual at the Ritz-Carlton. While Bolsonaro posted a photo of their meeting on Jan. 6, social media posts unearthed by ADI show that the meeting in fact took place on Jan. 5, suggesting that Lindell—who, prior to dinner, had spoken at a so-called Stop the Steal rally where calls for violence were ubiquitous—had thought it important to make time for Eduardo Bolsonaro.

While there is no evidence that Bolsonaro joined Lindell at that later meeting, two other men with business ties to Brazil were in attendance: father and son Doyle and Daniel Beck, who operate Combat Armor Defense, Inc., an armored vehicle company that has ties to Jair Bolsonaro as well as the Brazilian military and police.

Late in the evening on Jan. 5, Daniel Beck offered a synopsis of the meeting in a Facebook post. “We talked about the elections, illegal votes, court cases, the republics’ status, what to expect on the hill tomorrow. TRUMP WILL RETAIN THE PRESIDENCY!!!” he wrote.

Eduardo Bolsonaro remained mostly absent from his otherwise prolific social media presence until Jan. 7, when he met with close Trump allies. The day following the Capitol attack, according to his Facebook post, Eduardo Bolsonaro attended a meeting with Trump ally Matt Schlapp, chairman of the American Conservative Union (which puts on the Conservative Political Action Conference), to arrange details for CPAC Brazil 2021.

Following his meeting with Schlapp, Eduardo Bolsonaro addressed the events of Jan. 6, echoing a series of tweets by Brazilian Foreign Affairs Minister Ernesto Araujo. “We must deplore and condemn the invasion,” but “at the same time nothing justifies, in a democracy, the disrespect of the people by the institutions or those who control them,” he tweeted. On Jan. 8, Bolsonaro met with Jared Kushner—with Bolsonaro sharing a photo of the two of them on social media.

Eduardo Bolsonaro’s meetings with protagonists in the insurrection drama raise the question: What do the far-right in Brazil and the extreme right in the United States get out of this relationship?

“F​​rom the U.S. perspective, I think it’s more about signaling to a domestic audience that the Trumps are not pariahs, that they have international connections,” says Pagliarini, the assistant professor of history who has written widely on Brazilian politics. “From the Brazilian perspective, I think it’s also about being able to show international validation … to show that they share a vision and agenda, a political project, with the then leader of the most powerful country in the world.”

Already Eduardo Bolsonaro’s connections in the United States have paid off. CPAC hosted its own conference in Brazil in September, orchestrated by Matt Schlapp and the younger Bolsonaro. Thousands attended as Jair Bolsonaro baselessly warned that voter fraud could steal the 2022 presidential election; Donald Trump Jr. was on hand to claim that China would meddle in the election.

At Mike Lindell’s “cyber symposium” rallies held in South Dakota in August 2021, Eduardo Bolsonaro was introduced as a featured speaker by none other than Bannon, who claimed that the only way Jair Bolsonaro could lose the presidential election is if “the machines” steal it. Lindell is among those financially supporting Bannon’s “War Room” podcast and is a regular guest.

Pagliarini says the Bolsonaros aren’t likely looking to Bannon or any other right-wing operatives in the U.S. for talking points; more likely, they’re looking to Bannon, who used Cambridge Analytica to help get Trump into the White House, for help with technology and strategy—how to use disinformation and social media to squeak out another presidential win for far right.

Still, Pagliarini is hopeful. While there may be hunger among the far-right for a Jan. 6-style coup in Brazil, he doesn’t see much of an appetite among the Brazilian public for such an upheaval. On Sept. 7, the day that the Brazilian president had called for a massive rally in support of a “countercoup,” an estimated 100,000 Bolsonaro backers gathered in Brasília and São Paulo, according to Brazilian media outlets. Though nothing to dismiss, attendance was much lower than what analysts had expected.

Brazil—with the largest democracy and economy in Latin America—is a central battleground for Latin American politics. Its 2022 presidential election is “the most important election in the world this year,” Pagliarini said. “And I think we’re going to see right-wing forces pull out all the stops to, if not support Bolsonaro, at least defeat the left.”

Eduardo Bolsonaro (left) posted to Twitter this photo of his meeting with Trump adviser Steve Bannon (right) in 2018. Bolsonaro has said they “share the same worldview.” (Screenshot) Mike Lindell, MyPillow Guy persona and sugar daddy to right-wing media personalities, sat down for a dinner with three others at the Ritz Carlton Hotel in Pentagon…

Eduardo Bolsonaro (left) posted to Twitter this photo of his meeting with Trump adviser Steve Bannon (right) in 2018. Bolsonaro has said they “share the same worldview.” (Screenshot) Mike Lindell, MyPillow Guy persona and sugar daddy to right-wing media personalities, sat down for a dinner with three others at the Ritz Carlton Hotel in Pentagon…

The Jan. 6 Insurrection Should Have Been No Surprise, and Neither Should the Next Right-Wing Coup Attempt