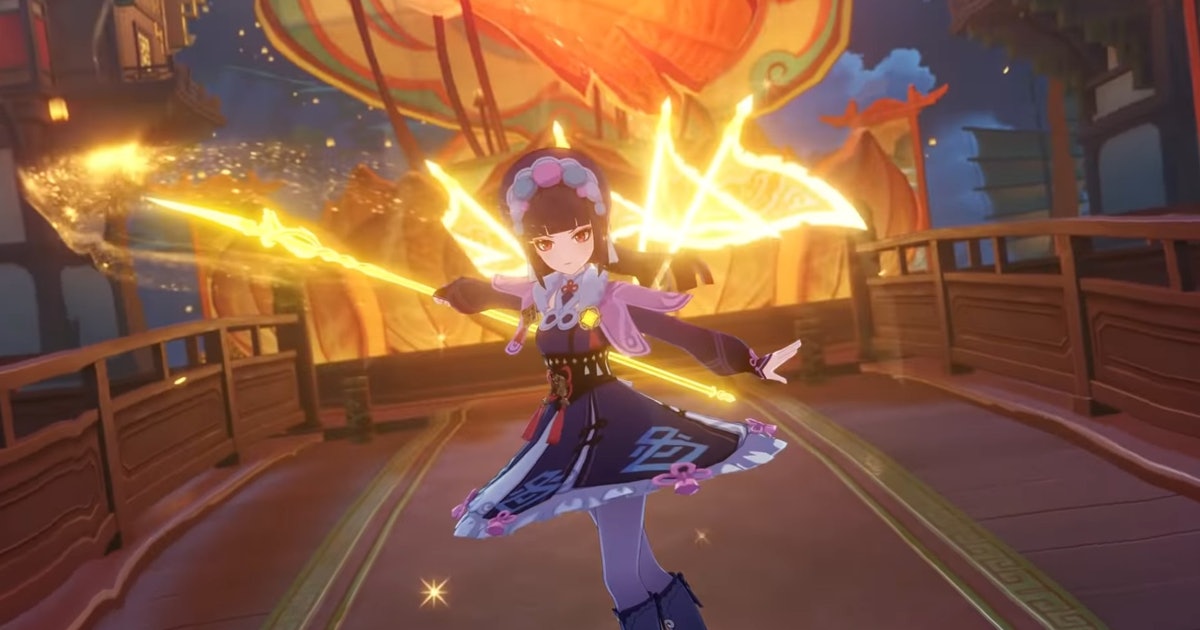 After leaking what feels like a million years ago, Liyue Harbor’s beloved opera singer, Yun Jin, is finally arriving in-game. Unlike Shenhe, this famed performer is actually free to all players, since you can grab her as part of the headlining event for Genshin Impact 2.4, “Fleeting Colors in Flight.” While Gorou buffs Geo damage, and Shenhe buffs Cryo, Yun Jin is all about strengthening normal attacks with her Flying Cloud Flag Formation effect. So if you want to take advantage of her hybrid support powers, here’s how to make it happen.

Yun Jin can use her Opening Flourish skill to create a stationary shield and charge up before unleashing a powerful Geo attack. Similar to Beidou‘s Tidecaller ability, once Yun Jin unlocks her “True to Oneself” passive, she can use this skill to parry enemy strikes and immediately deal a fully charged version of the attack right off the bat.

It’s a fun mixture of abilities that should make for a refreshing playstyle, and if Yun Jin’s parry is even a little similar to Beidou’s Tidecaller, it’ll have some pretty decent damage potential, too. In this Genshin Impact Yun Jin build guide, I’ll lay out our best build for the prestigious parrier, as well as a potential no-spend setup.

First and foremost, Yun Jin is a Geo support character who specializes in strengthening normal attacks with her Cliffbreaker’s Banner burst. When she activates it, a Flying Cloud Flag Formation is created, granting bonus damage to your party’s normal attacks, scaling with Yun Jin’s defense. This means that building defense is very important if you want to make the most of that buff.

Yun Jin is also a shielder, but in a similar way to Beidou, which is to say, not really. She can provide a strong shield that scales with her max HP, but other characters won’t benefit from it, and it will end as soon as she finishes charging and unleashes her Geo attack. If you’re playing Yun Jin for her normal attack buff, she isn’t likely to spend much time on the field. With this in mind, her greatest sub-DPS potential might be Opening Flourish’s parry, as it removes the need to charge the skill at all. That’s what I was going for with this build:

Shenhe’s five-star polearm is a great pick for characters who hit quickly then spend time off the field. When you use an elemental skill you gain Consummation for 20 seconds, increasing attack by 3.2 percent per second up to a maximum of five. When the character is not on the field, this attack boost is doubled. It also provides attack as a substat and boosts all elemental damage by 12 percent, strengthening Yun Jin’s Geo parry even further.

The Husk of Opulent Dreams artifact set adds another layer to this. Two-pieces offer a 30 percent defense boost that buffs the effect of Yun Jin’s burst. Four-pieces, on the other hand, add a stackable called Curiosity to the mix. Like the attack buff for Calamity Queller, the wearer gains one stack every three seconds they are off the field, up to a maximum of four. Each Curiosity stack grants a 6 percent defense and Geo damage bonus. Both of these together should allow Yun Jin to build attack and Geo damage off the field, jump in to unleash a powerful parry strike, and use the extra defense generated from Curiosity to activate her burst buff for other characters. If you decide to try this option, don’t forget to throw in some energy recharge so she can hit her burst consistently.

That said, not everyone will want to give Calamity Queller to a four-star character. Deathmatch is a good alternative if you want to build crit rate and damage for the parry and strengthen Yun Jin’s normal attacks. It boosts crit rate as a substat, and increases attack and defense by 16 percent with two opponents nearby, and attack by 24 percent with just one. Provided you also prioritise building defense with artifact substats, both of these choices should turn Yun Jin into a great support/sub-DPS hybrid. If you just want to run her as a support character instead and have no interest in damage, our Favonius Lance build below is a better choice.

If you want to run Yun Jin as a plain ol’ support, there are some good no-spend options for her.

White Tassel is a three-star polearm that strengthens normal attack damage by 24 percent and increases crit rate as a sub-stat, adding more value when you use the normal attack buff with Yun Jin. The Favonius Lance is a great four-star pick if you want to boost energy recharge and get that burst buff as often as possible since when you land a crit, it produces energy particles. Be sure to build some crit rate, though, to make sure you get full value out of it.

In terms of artifacts, two-pieces of Defender’s Will and two pieces of Husk of Opulent Dreams grant a bonus of 30 percent defense each. If you don’t have Husk of Opulent Dreams, you could use Lucky Dog for its defense boost of 100, but as this isn’t a percentage, be aware that it won’t scale. All in all, this should let you use Yun Jin’s burst lots while ensuring that it offers a hefty normal attack buff for characters when it does drop.

And that’s our Genshin Impact Yun Jin build. We hope you have fun in version 2.4!

After leaking what feels like a million years ago, Liyue Harbor’s beloved opera singer, Yun Jin, is finally arriving in-game. Unlike Shenhe, this famed performer is actually free to all players, since you can grab her as part of the headlining event for Genshin Impact 2.4, “Fleeting Colors in Flight.” While Gorou buffs Geo damage,…

After leaking what feels like a million years ago, Liyue Harbor’s beloved opera singer, Yun Jin, is finally arriving in-game. Unlike Shenhe, this famed performer is actually free to all players, since you can grab her as part of the headlining event for Genshin Impact 2.4, “Fleeting Colors in Flight.” While Gorou buffs Geo damage,…