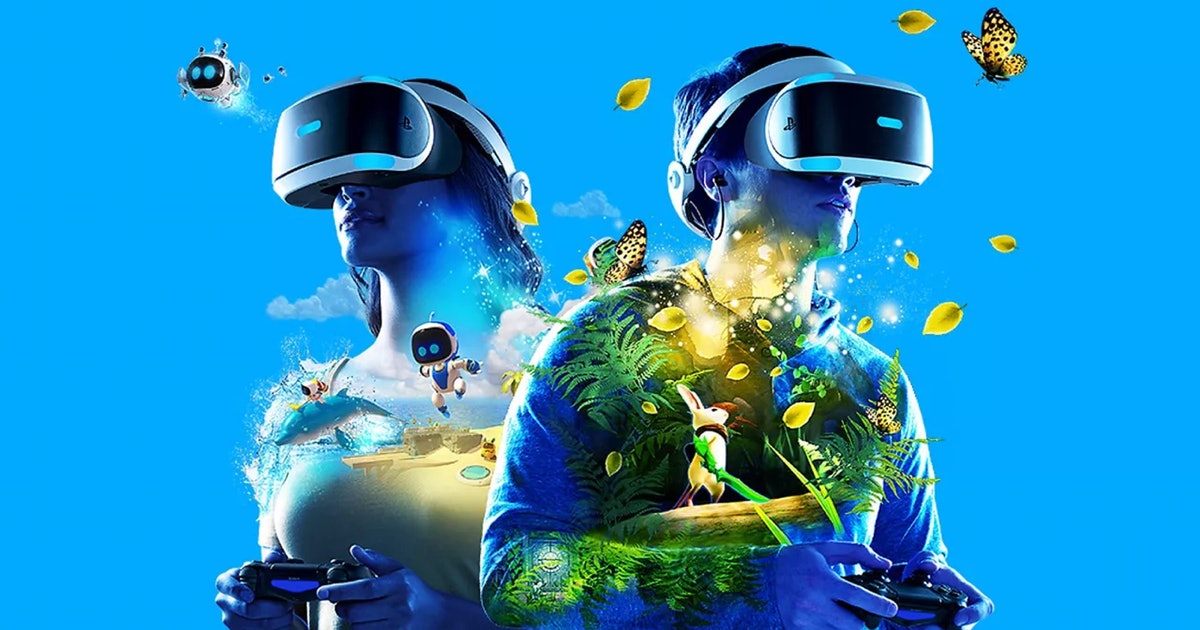 During its CES 2022 press conference, Sony officially announced PSVR 2, a brand new virtual reality headset with a variety of improvements. It’s still clearly in the early stages, however, as the company revealed nothing outside of a few technical specs and changes, including a much-requested single-cord setup that takes away the mess of cords from the previous iteration. Unfortunately, Sony hasn’t even hinted at what the headset will look like, what it will cost, or when it will release. There’s still time to make the necessary innovations to make this hardware worthwhile, but can Sony deliver?

The PlayStation Blog post announcing PSVR 2 lays out all the new specs, but the big details are an OLED display, 4K HDR, a display resolution of 2000×2040 per eye, and new Sense controllers. It certainly sounds good, but nothing is too buzzworthy or exciting. Part of the problem is the state the first PSVR has been in for the last couple of years. There’s just not a lot of support or programming, which leaves most of us indifferent towards the product. Support from Sony slowed down after the first year of PSVR, and if the company wants its next iteration to be a success they need to make sure that indifference on the part of players is gone.

There’s a variety of changes that Sony can make with both the design of the headset and the overall approach, however. Here’s what they are.

Ease of Use and More Comfort

One of the biggest problems with the first PSVR is how much of a struggle it is to use. Nearly a half dozen wires are needed anytime you want to use the system, on top of the fact that you need a PlayStation Camera setup, as well as PlayStation Move controllers for certain games. It’s an absolute headache unless you just leave the thing plugged in at all times which, of course, then adds a lot of clutter. The announcement reiterates that PSVR 2 will have a single-cord setup, but it won’t feel like an effective change until Sony actually shows what that looks like.

Going hand-in-hand with ease of use is comfort, something virtual reality has struggled with at large. While PSVR wasn’t nearly the most uncomfortable headset, there are still improvements that can be made to make it even better. Extra padding or a shift in design could make it easier to wear the headset for long periods of time, while there could also be more done to account for users that might wear glasses. There’s no massive change that needs to happen in terms of comfort, but even small changes could go a long way.

One of the most important things Sony needs to do with PSVR 2 is to actually support it … and then continue to support it. Early on in the headset’s life, there were titles like Astrobot Rescue Mission, Moss, and Blood & Truth, but it’s easy to see how Sony’s first-party offering on PSVR slowed. Third-party developers consistently kept putting out interesting games, but it’s up to Sony to set the precedent and really show how games can take advantage of the new hardware.

Alongside the headset announcement, Sony also announced Horizon Call of the Mountain, a brand new VR-focused experience in the Horizon series. It’s a good indication that Sony wants to provide those unique experiences, but hopefully, they’ll have more to show in the near future.

Going along with first-party support is having unique experiences that take full advantage of the hardware, and aren’t just “games with a VR mode.” If Sony can set the precedent of how to use its hardware, other developers can follow suit with more unique experiences. There is an example of this already with the PS5’s DualSense controller. First-party games like Returnal, Astro’s Playroom, and Ratchet & Clank: Rift Apart have done a fantastic job of showing how the haptic triggers and feedback can be used for gameplay.

One of the best examples of a game that can only be played in VR is Half-Life: Alyx, a game that uses the perspective and scale of VR as a design tool. On the first PSVR Blood & Truth was a great example of how an action game can play on the medium, but upgraded hardware could really have helped make it that much better. The best way to get players on board with PSVR 2 is to have unique experiences that they can’t get anywhere else.

While VR has become more affordable over the years, it remains an expensive luxury at best.

PSVR 2 requires a PS5 in order to use, which is already a $400 or $500 investment. If the new headset is the same price as the first PSVR, you’ll then need to drop another $300. After all that you’ll need to spend $20-$50 per game, which makes things really start to add up. One way to allay these costs is to create some kind of Xbox Game Pass-style platform for PSVR 2 games or even just PlayStation games in general. Having a low-cost monthly subscription would provide more value for players that are spending hundreds of dollars on the console and headset. Sony does an okay job with PS Plus giving away some free VR titles, but it feels like the bare minimum.

Of course, lowering the cost of the headset itself might not be a bad idea either.

The biggest problem here, of course, is that this assumes players can even purchase a PS5 or PSVR 2. At the time of writing, it’s still nearly impossible to get your hands on a PS5, and that doesn’t bode well. In order to get a high attach rate, Sony will want as many players as possible to have a PS5 when the PSVR 2 launches. At the very least the launch of the headset needs to wait until some of the stock problems have been addressed.

One of PSVR’s main selling points, when it launched, was that it was more affordable than other VR headsets. However, this came at a cost as it was quite a bit less powerful than other headsets on the market, especially if players had stronger rigs to support it. One problem that plagues PSVR is blurriness, which is natural for a less powerful console.

There are ways to deal with the blurriness, like cleaning the headset, doing an eye-to-eye distance test, etc., but it’s always going to be there in some way. Hopefully, the added power of the PS5 can ensure that blurriness is a thing of the past, and the new specs released certainly seem to point in that direction. As VR technology grows in leaps and bounds every year, if Sony wants its new headset to stay competitive, it needs to have the visual fidelity that players expect.

During its CES 2022 press conference, Sony officially announced PSVR 2, a brand new virtual reality headset with a variety of improvements. It’s still clearly in the early stages, however, as the company revealed nothing outside of a few technical specs and changes, including a much-requested single-cord setup that takes away the mess of cords…

During its CES 2022 press conference, Sony officially announced PSVR 2, a brand new virtual reality headset with a variety of improvements. It’s still clearly in the early stages, however, as the company revealed nothing outside of a few technical specs and changes, including a much-requested single-cord setup that takes away the mess of cords…