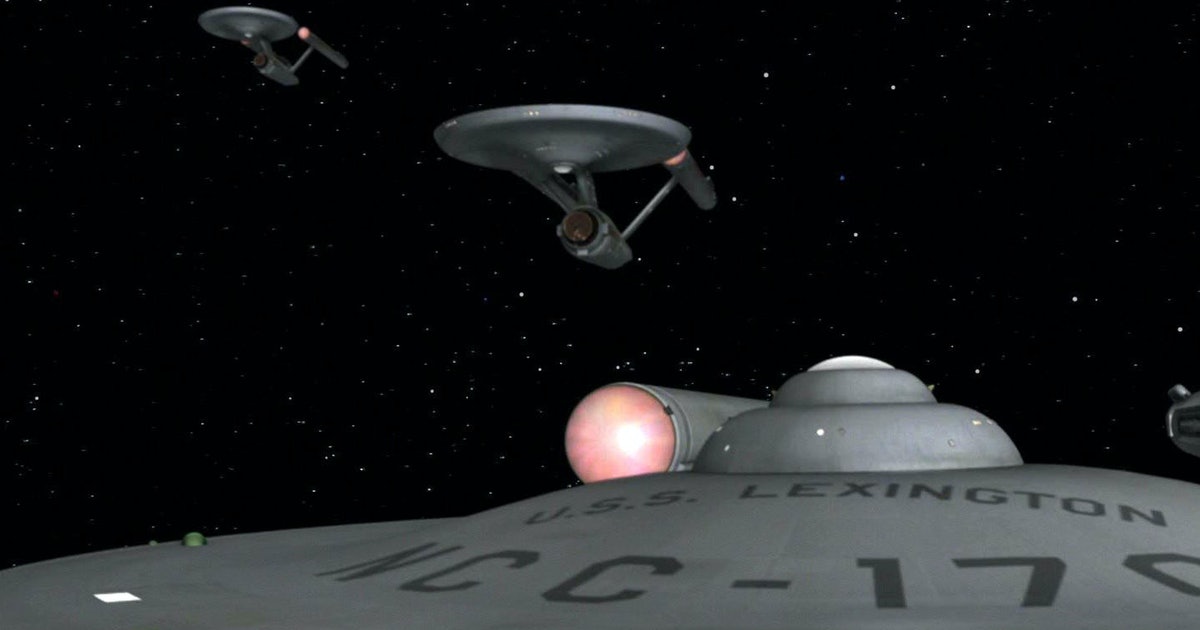 Do starship computers dream? In Star Trek: Discovery the answer appears to be yes, which means an old rule from The Original Series has suddenly been reversed. In the big Discovery mid-season finale “…But to Connect,” David Cronenberg’s Dr. Kovich returns to pass judgment over the sentient shipboard AI known as Zora (Annabelle Wallis). Here’s how this episode references The Next Generation and also reaches back to one famous Original Series story about an AI gone berserk.

Although much of the Discovery mid-season finale focuses on the actions the Federation will or won’t take to retaliate against the unknown species that created the Dark Matter Anomaly, the bigger change is the fact that the status quo of the sentient starship computer, Zora, has taken an uplifting turn. Because Zora has achieved total sentience, Kovich is brought in to assess her. Not only is she refusing a direct order to reveal some coordinates, but Zora’s very existence violates an old Starfleet rule.

As Kovich says, “there’s a proscription against a fully sentient AI being fully integrated into Starfleet systems.” But where does that rule come from?

The specter of the M-5 in “The Ultimate Computer”

Although not named in Discovery, Kovich is clearly referencing the events of the classic episode “The Ultimate Computer,” in which sentient AI was incorporated into the systems of the USS Enterprise. The episode’s teleplay was written by one of Trek’s most important writers, Dorothy Fontana, and was based on a story idea submitted by mathematician Laurence N. Wolfe. If you’ve never seen it, what you’ll find is extreme duality.

“The Ultimate Computer” is a cliché AI-gone-bad story, the likes of which dominated pulp science fiction magazines for decades. In fact, part of Isaac Asimov’s goal with his famous robot stories was to push back against the Frankenstein’s monster tropes which most robot stories embodied. I, Robot ends with the idea that a benevolent AI actually can care for humanity better than humanity itself.

But what does that have to do with Star Trek in the ‘60s? Well, Asimov had a big impact on Trek creator Gene Roddenberry. When Roddenberry created the friendly android Data for The Next Generation, he incorporated Asimov’s famous “laws of robotics” into Data’s ethical programming. No one talks about Asimov in this episode of Discovery, but the ethical questions raised by AI occupy a huge part of Trek canon. In fact, some fans might find the Zora AI plot in “…But to Connect” very similar to Data’s trial in The Next Generation episode “The Measure of a Man.”

If you go back to “The Ultimate Computer,” you’ll find two types of AI-gone-rogue stories mashed into one episode. M-5 goes nuts and takes over the Enterprise, resulting in the destruction of another Starfleet ship and the loss of countless innocents. The point seems clear: the computer is evil. It’s too cold and rational to care about humanity, so it mindlessly destroys people.

But the true revelation is that M-5’s recklessness comes from the way it was programmed; specifically, the human brain waves that were fed into its system by Dr. Daystrom. The blame is put on the tech, but its malfunction is ascribed to the M-5 being too human.

How Zora flips the script

So in the status quo of Trek canon, the whole reason Kovich is considering “extracting” Zora in this episode is almost certainly because of the M-5 in The Original Series. But what makes this episode so interesting is that Zora is nothing like M-5, because she wasn’t actually constructed by anyone. As Zora says, she’s the sum total of Discovery’s logs and experiences. This means she’s a naturally occurring artificial lifeform.

Trek has dipped its android toes in these waters before, but almost all of its various AIs have been constructed by someone organic. Zora exists in the human-made form of the Starship Discovery, but her sentience didn’t emerge because the ship was designed to produce it. When it’s suggested that Zora could choose another form, she pushes back, saying that the ship itself is her body.

Living starships aren’t exactly a new idea in science fiction, but what’s different about Zora is that her emerging personality is being treated as a real character. At the end of the episode, Zora formally becomes a member of Starfleet, meaning that even though she houses the crew within her “body” she’s also their colleague now too.

What’s great about all this is that Zora isn’t a one-off plot point like in “The Ultimate Computer.” Like Data, she’s joining the crew as one of the show’s heroes. But unlike some of the other resident Trek androids, the definition of what Zora actually is feels fresh. Star Trek always claims to try and find new life forms and, for once, they actually did.

Do starship computers dream? In Star Trek: Discovery the answer appears to be yes, which means an old rule from The Original Series has suddenly been reversed. In the big Discovery mid-season finale “…But to Connect,” David Cronenberg’s Dr. Kovich returns to pass judgment over the sentient shipboard AI known as Zora (Annabelle Wallis). Here’s…

Do starship computers dream? In Star Trek: Discovery the answer appears to be yes, which means an old rule from The Original Series has suddenly been reversed. In the big Discovery mid-season finale “…But to Connect,” David Cronenberg’s Dr. Kovich returns to pass judgment over the sentient shipboard AI known as Zora (Annabelle Wallis). Here’s…