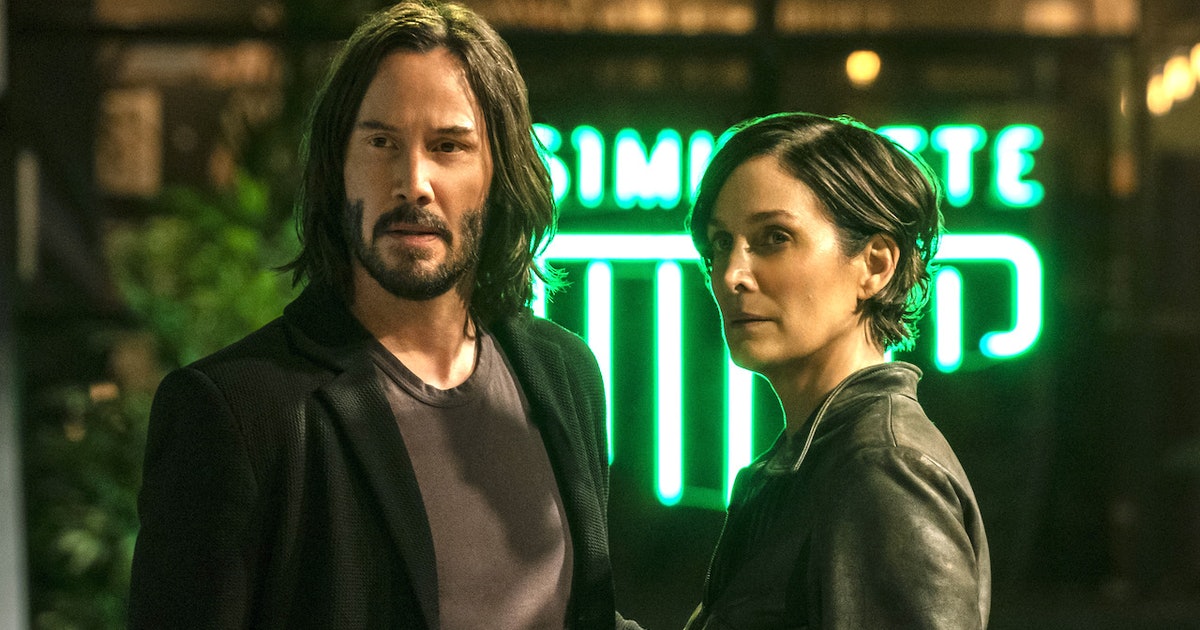 Is it really a surprise that a new Matrix film would be polarizing?

18 years after Revolutions, Lana Wachowski returns to the world of the Matrix to make a film that’s equal parts sequel, remake, reboot, and statement about who decides the meaning of art. Whether you love it or hate it, The Matrix Resurrections is undeniably a hot mess, but the key to deciphering this new movie may lie in another highly anticipated 2021 sequel to an equally influential 20-year-old franchise.

Evangelion: 3.0+1.0 Thrice Upon a Time was originally slated for release in 2008, but multiple delays pushed it back by over a decade. It serves as a conclusion to the Rebuild of Evangelion film series while also offering meta-commentary on the entire franchise and grappling with its creator’s fraught relationship with Evangelion fans.

Rebuild began as a straightforward remake of the acclaimed anime Neon Genesis Evangelion, retelling the story of 14-year-old Shinji Ikari, who is conscripted into the battle between bio-machine mechas and giant monsters called Angels in a post-apocalyptic Tokyo-3. However, it quickly moved beyond its source material.

Evangelion: 3.0 You Can (Not) Redo opens with Shinji waking up 14 years after the Third Impact, a cataclysmic event that caps off The End of Evangelion. By the time Thrice Upon a Time (the fourth entry in the saga) arrived, it was a mix of the original Evangelion ending and a new story designed to comment on the franchise as a whole.

Like Matrix Resurrections, Thrice Upon a Time is in constant conversation with itself, not only in terms of recreating classic scenes but particularly with its legacy and influence. In both films, we literally see footage from past entries projected on the walls, not just to remind audiences of what made them fall in love with these franchises, but to highlight how different things are decades after the original.

This is clear in the aesthetic choices of Resurrections, which presents a wildly different vision of the Matrix than audiences would expect while constantly reminding them what the original looked like. In Thrice Upon a Time, director and franchise-creator Hideaki Anno remixes the final episodes of both the anime and the 1997 film The End of Evangelion.

In Thrice Upon a Time, characters point out that Shinji has noticeably changed and seems more grown-up, referencing both the 14-year-time jump as well as how the character has evolved to reflect a changing world and its aging creator. In Resurrections, Keanu Reeves is reintroduced as the creator of a video game trilogy called The Matrix and is perceived by everyone around him as an old man.

The similarities go on (both movies are stuffed without enough ideas to spawn an entire new trilogy), but the thing that truly ties the Matrix and Evangelion together is the way their latest entries respond directly to the wider discussion around them.

Both Wachwoski’s Matrix Resurrections and Anno’s Evangelion: 3.0+1.0 Thrice Upon a Time attempt to reclaim their respective franchises from two decades’ worth of fan discourse and sometimes-toxic obsession while attempting to bring their sci-fi epics to a definitive end.

In May 2020, Lilly Wachowski went viral on Twitter after responding to tweets from Elon Musk and Ivanka Trump about the Red Pill/Blue Pill, a pivotal moment from The Matrix that’s been co-opted by racists and white supremacists in recent years. Lilly wasn’t interested in revisiting the Matrix, but it’s no coincidence her sister’s sequel begins with a room full of people debating what made it great in the first place.

“Like Matrix Resurrections, Thrice Upon a Time is in constant conversation with itself.”

Lana Wachowski uses Resurrections to make a simple but effective statement: “The only person who actually understands the Matrix is me (and Lilly).” At the same time, it’s also a direct shot at Warner Bros., which has made it clear that Matrix 4 would have happened with or without the Wachowskis’ input.

As part of this argument, Wachowski strips the Matrix of almost everything fans expect. That instantly recognizable green tint is gone. So is Bullet Time, Agents, and even the groundbreaking fight choreography of Yuen Woo-ping. By removing everything we expect, Resurrections forces us to confront the truth of this new movie: Neo is nothing but a cog in a capitalist machine, and the only thing that will save him is love. Unlike the original trilogy, there’s little room for interpretation this time around, and that’s entirely by design.

Hideaki Anno is no stranger to using art to criticize his audience or his studios. A self-proclaimed otaku, the animator often uses his experiences with fandom to inform his plots. Characters in his shows often miss out on life while “regular” people get to live happily on the sidelines.

When the optimistic ending of Neon Genesis Evangelion got such polarizing reactions that Anno and his studio received violent threats, he spiraled into depression. Then he remade the ending with The End of Evangelion, a movie that infamously slaughters fan-favorite characters. It ends with all of humanity being dissolved into orange goop while those angry letters are projected over live-action footage of people watching the film. End of Evangelion was an angry, hurt film from an angry, hurt creator that all but held a giant sign directly at the audience asking, “Is this what you wanted?”

“Thrice Upon a Time effectively ends all possibilities for more stories or remakes.”

For Thrice Upon a Time, Anno takes a different approach that’s equally effective but much more hopeful. The first half of the film has Shinji reunite with old classmates, who moved on and grew up. Meanwhile, Shinji and his fellow mech pilots are literally unable to age, stuck as unhappy teenagers — a not-so-subtle metaphor for the toxic fanboys who lashed out at Anno years prior.

It’s ultimately revealed that the film is part of a time loop where Shinji causes the end of the world and rewinds time again and again. This new ending manages to reject both the original abstract ending of Neon Genesis Evangelion and the nihilistic apocalypse of End in favor of something new. A more mature Shinji decides not only to help himself but to heal those around him before rebooting the world as he has done multiple times before. Except, rather than rewind the world he reboots it to erase all existence of the Eva units that give the franchise its name. Thrice Upon a Time effectively ends all possibilities for more stories or remakes.

Both Evangelion and Resurrections end not with parallels to their respective franchise’s original ending, but by taking a final stand against both their fans and the studios that demand endless sequels.

Shinji finally grows up, finds love, and the film transitions from animation to live-action as we visit the real-life hometown of Hideaki Anno, pleading audiences to do the same and find happiness outside their fandom. Likewise, when Neo once again flies into the horizon, he’s not alone. Instead, Trinity can fly too, and together they decide to stay in the Matrix, literally paint the sky with rainbows, and remake the world into whatever they want. They don’t leave the Matrix to lead the new human city. They don’t even care about Agent Smith’s unexplained return. Instead, they just fly into the sunset holding hands.

As even more popular franchises get rebooted years after their original endings — often without their creators — The Matrix Resurrections and Evangelion: 3.0+1.0 Thrice Upon a Time stand out as rare examples where new entries serve as effective criticisms of the very idea of nostalgic reboots and remakes, all while reclaiming the narrative for their respective franchises from decades of toxic fandom and corporate meddling.

What’s your favorite sci-fi movie? Click here for a chance to get paid to write an article for Inverse.

Is it really a surprise that a new Matrix film would be polarizing? 18 years after Revolutions, Lana Wachowski returns to the world of the Matrix to make a film that’s equal parts sequel, remake, reboot, and statement about who decides the meaning of art. Whether you love it or hate it, The Matrix Resurrections…

Is it really a surprise that a new Matrix film would be polarizing? 18 years after Revolutions, Lana Wachowski returns to the world of the Matrix to make a film that’s equal parts sequel, remake, reboot, and statement about who decides the meaning of art. Whether you love it or hate it, The Matrix Resurrections…