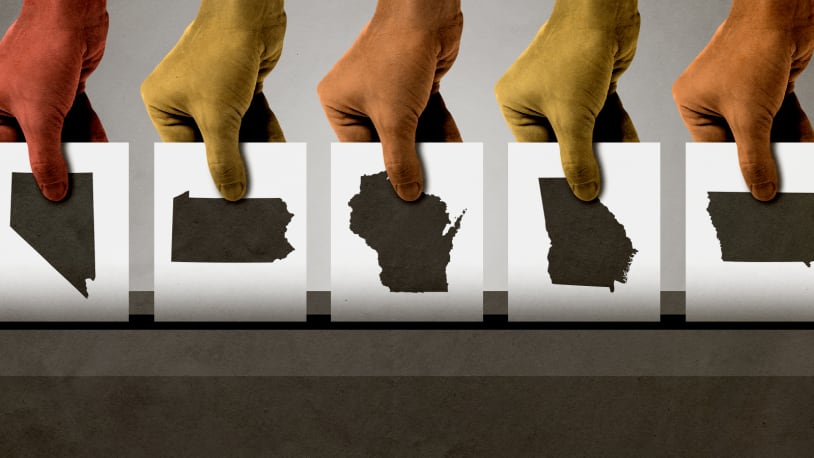 When the holidays are over — marred as they will be by concerns about the Omicron variant — then the 2022 midterm election cycle will kick into gear in earnest.

If it feels like we just did this yesterday, it’s because we did: The U.S. operates the most frequent national legislative election schedule in the world, and before you can say “Paxlovid,” all 435 House seats, a third of the Senate, a raft of critical governor’s seats, and thousands of state legislative offices will be up for grabs, whether we have made our way miserably through the whole Greek alphabet or finally put the pandemic behind us.

Here are five of the most critical races, which might resolve nagging questions about the role of former President Donald Trump in the Republican Party, the extent to which GOP assaults on “Critical Race Theory” are working, whether Democrats have stopped the bleeding with Latino and suburban voters, whether Republicans will be poised to stage a legislative coup in 2024, and more.

The governor’s race in Wisconsin is the perfect tornado of our contemporary political predicament, sweeping up culture war fury, hyper-aggressive gerrymandering, dubious court legitimacy, authoritarian drift, and disputed elections into its furious winds. Incumbent Democrat Tony Evers eked out a narrow victory in the blue wave of 2018, but faces strong headwinds with President Biden’s approval in the low 40s and a voting public deeply wary of COVID-19 and its attendant disruptions to daily life. The Wisconsin Republican Party, perhaps the most radicalized state party in the country, has gerrymandered itself into functionally permanent control of the state legislature, limiting Evers’ ability to make consequential policy — but like several other gubernatorial races in Arizona, Michigan, Pennsylvania, and Georgia, the Wisconsin battle has national implications for 2024 and beyond.

Most notably, the badger state is ground zero for GOP attempts to anoint state legislatures as the true arbiters of presidential election results, something they tried and failed at in 2020 not because it isn’t possible, but because they didn’t have enough corrupt officials in the right places. Having a Democrat in Madison complicates the plot against democracy — therefore expect this race to receive several C-17s full of outside cash as both parties correctly perceive its importance.

Beyond its direct procedural implications for 2024, Wisconsin’s status as the reigning tipping point state in the Electoral College and its recent history as the hardest state in the country to correctly poll should give us a pretty clear picture of the contemporary political environment.

Incumbent two-term Republican Sen. Pat Toomey announced his retirement earlier this year, instantly making Pennsylvania the fulcrum point of Democratic hopes for enlarging the party’s Senate majority and thereby making it functional by depriving Sen. Joe Manchin (D-W.Va.) of his kingmaker status. Democrats have a strong bench of potential recruits, led by incumbent Lt. Gov. John Fetterman, whose working-class aesthetic and no-nonsense style could help him peel away votes in the vast ocean of Trump-leaning counties in the middle of the state. Other credible candidates include state Rep. Malcolm Kenyatta from Philadelphia and U.S. Rep. Connor Lamb. Thus far, Fetterman enjoys a commanding lead for the June 7 primary.

And when Mehmet Oz, a.k.a. Dr. Oz, best known for his appearances on The Oprah Winfrey Show and his repeated forays into hydroxychloroquine peddling and other pseudoscientific ventures, decided last month to seek the GOP nomination, it only ensured that this race will be especially high profile. The GOP primary has already been tumultuous: In September, Trump endorsed Sean Parnell, last seen narrowly losing to Democrat Connor Lamb in Pennsylvania’s 17th House District in 2020. Parnell catapulted to the top of (very limited) polling before dropping out of the race before Thanksgiving after losing custody of his children in divorce proceedings that included domestic violence allegations.

Trump, who seems uncannily talented at identifying the most violent misogynists in the room, has not issued a new endorsement, but Dr. Oz would seem to be a more likely choice than firebrand radio host Kathy Barnette, whose politics are probably closer to the former president’s. Candidates from the party’s now-vanquished establishment wing, like U.S. Ambassador to Denmark Carla Sands, seem unlikely to get any traction. The most competitive candidate might be former lieutenant governor nominee and real estate developer Jeff Bartos, who exudes extremely potent Glenn Youngkin vibes, but who probably can’t compete with Oz’s star power.

In Georgia, Democratic rising star Stacey Abrams is overwhelmingly likely to capture her party’s nod for the governor’s race. After spearheading voter registration and protection efforts that gave Joe Biden a narrow win in the state, as well as the January 2021 double-barrel runoff wins that made Chuck Schumer (D-N.Y.) the Senate majority leader, Abrams is at the apex of her power within the Democratic Party. The real mystery in this race is who she will square off against.

Incumbent Republican Gov. Brian Kemp, once a loyal Trump sycophant and MAGA favorite, fell out of favor with the 45th president of the United States when he refused to participate in the Republican Party’s post-election coup efforts. Instead, Trump has endorsed former Sen. David Purdue, who lost his Senate seat in January to Democrat Jon Ossoff due at least in part to Trump’s relentless quest to delegitimize election results. Trump’s backing has already had an impact, with Kemp’s double-digit lead over the blander-than-boiled-chicken Purdue vaporized in the most recent survey (albeit one in which Trump’s endorsement was hypothetical). The outcome of the May 24 primary will tell us a great deal about whether Trump’s grip on the GOP is waning like vaccine immunity, or if he is still the kind of kingmaker whose mere utterances can sweep aside sitting governors like so much detritus.

Given Georgia’s controversial efforts to rewrite election laws after 2020, Georgia will be a national race with the same implications for 2024 as the other premier swing state governor contests. If Purdue wins the primary and then bests Abrams next November, expect Georgia to join the camp of states angling to anoint a Republican president in 2024 no matter what the voters decide.

Nevada rarely receives the kind of national attention showered on the country’s other hotly contested battleground states, but the 2022 Senate race could be pivotal for control of the Senate as well as revelatory in terms of evaluating whether Democratic losses with Latino voters in 2020 were a blip or the start of a trend that could upend the basis of both party’s coalitions.

While Democrats currently hold both of the state’s Senate seats as well as the governor’s office, the last two presidential cycles have been ominously close wins for liberals, with margins way down from their Obama-era heyday. While findings of the 2016 and 2020 exit polls are disputed by some Nevada analysts, they showed Democrats going from a 31-point to a 26-point win with the state’s Latino voters. With the first Latina senator in U.S. history (Democratic incumbent Catherine Cortez-Masto) on the ballot running for re-election, this race really should give us a sense of national trendlines and how much trouble, if any, Democrats are in with this crucial voting bloc in the long term.

The GOP nomination is likely to be won by former state Attorney General Adam Laxalt, who lost the 2018 governor’s race to Democrat Steve Sisolak. Laxalt was quick to join the 2020 Truther chorus, baselessly alleging widespread voter fraud in Nevada and announcing his candidacy with the now-familiar litany of grievances about “wokeness” and the “radical left.” Laxalt is not exactly charismatic, but he’s able to keep his authoritarian streak contained in his dopey suburban dad costume and is unlikely to see his campaign implode from past scandals like other Trump selectees.

So far in limited polling, Cortez-Masto is stuck well below 50 percent and trailed Laxalt in three of four publicly released surveys, a sign that unless the national environment improves substantially for Democrats, this could be an uphill battle for the party.

The proposed redistricting maps for many states are in flux, but Iowa’s map is a done deal, with Republicans in charge of all statewide offices and no meddling non-partisan redistricting commissions to stand in the way.

The boundaries have shifted, but Democrat Cindy Axne will once again try to hold a slightly Republican-leaning district, with the blue-leaning Des Moines metropolitan area now divided between two districts in an effort to make it harder for her to hang on. Axne, first elected in the 2018 Democratic wave in a district a Republican carried by 14 points in 2016, captured the seat by just over 6,000 votes last year, cutting an already narrow margin of victory in half.

If Democrats are to succeed in what looks like a long-shot bid to retain control of the House of Representatives, they will need results more like Axne got in 2018 than in 2020. And if Republicans flip it and other closely divided former blue-wave districts, it will portend a very long night for Democrats.

January 1, 2022 January 1, 2022 When the holidays are over — marred as they will be by concerns about the Omicron variant — then the 2022 midterm election cycle will kick into gear in earnest. If it feels like we just did this yesterday, it’s because we did: The U.S. operates the most frequent…

January 1, 2022 January 1, 2022 When the holidays are over — marred as they will be by concerns about the Omicron variant — then the 2022 midterm election cycle will kick into gear in earnest. If it feels like we just did this yesterday, it’s because we did: The U.S. operates the most frequent…

What’s behind the public health switcheroo on COVID?