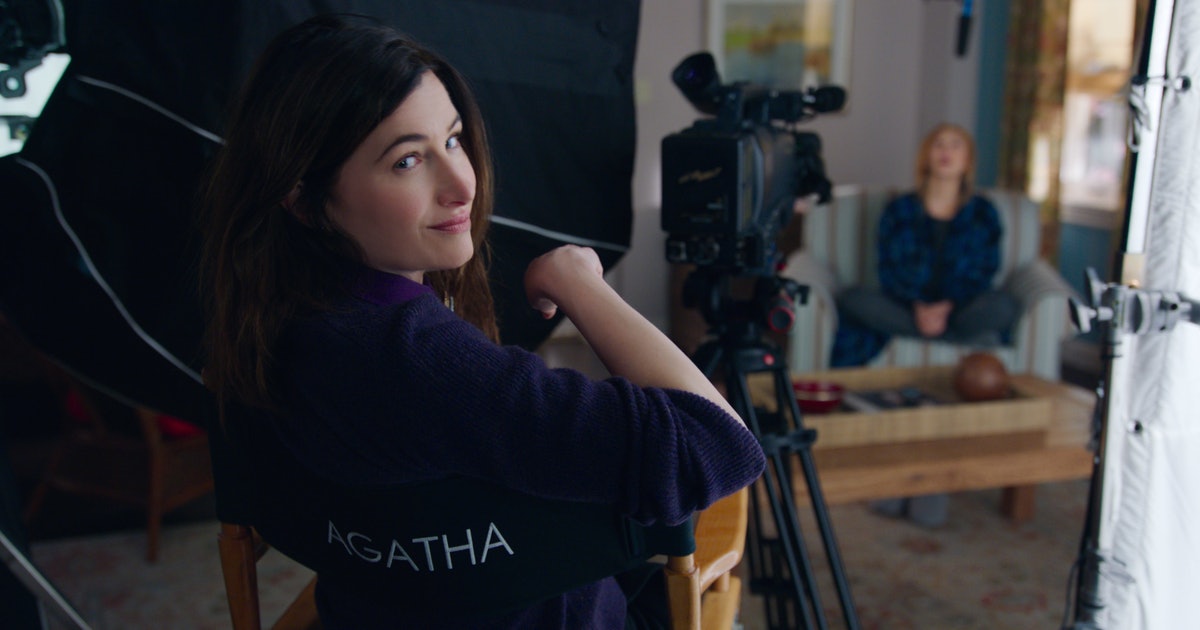 It’s hard to not think of her first appearance.

Sure, Kathryn Hahn’s Agatha Harkness has a number of standout moments in WandaVision on Disney+, but her entrance is ground zero for all of them. In the premiere episode “Filmed Before a Live Studio Audience,” the show aims to replicate the styles and rhythms of classic TV sitcoms, which are never complete without a nosy neighbor.

Enter from stage left: Kathryn Hahn as “Agnes,” dressed in plaid and a Mary Tyler Moore-style bob. With flowers in hand, she apologizes for not welcoming the newly married couple, Wanda (Elizabeth Olsen) and Vision (Paul Bettany) to the neighborhood sooner. “My mother-in-law was in town, so I wasn’t,” she says, with sharp timing that cues laughter from the studio audience. (You never meet her husband, by the way.) The spark she brings to the screen upon entering the scene elevates it exponentially, taking homage and turning it into alchemy.

She later declares, “Oh, this is gonna be a gas!” Soon you wonder who, exactly, it’s been a gas for.

SCENE STEALERS is a countdown that salutes the unforgettable small-screen characters of the year. Agatha Harkness is #3.

There are comic-to-screen performances that feel ripped from the page. Kathryn Hahn as Agatha Harkness is not one of them. Rather, Hahn’s performance is a rebuilding of a largely unknown character from the ground up, one so effective, so memorable, so instantly memeable that it stands out as one of the highlights of the post-Endgame Marvel Cinematic Universe and rang in what earlier this year I dubbed the Hahnaissance.

Who is Agatha Harkness?

When Hahn was announced to join the MCU it seemed like a strange fit. Her strengths often lie in material that allows her to lean into camp. While her standard dramatic chops are strong enough for a Marvel show more in the vein of Falcon & Winter Soldier, a more traditional Marvel action series played straight, the MCU still seemed a strange environment for her particular charms. Of course, this was before we had any idea what WandaVision would turn out to be, becoming the perfect platform for Hahn to give a performance that draws on everything she does well.

The way Hahn tells it, the similarities are incidental. Despite seeming to draw on her full oeuvre, she told the New Yorker: “I never connected it to my work previously, and I certainly never thought of my career leading to this particular show.” Even if it isn’t intentional, Agatha plays like a culmination of sorts. To paraphrase everyone who describes Blade in the Blade movies, it’s all of her strengths and none of her weaknesses (NOT THAT SHE HAS ANY).

The thing about Agatha is she’d be a “Hall of Fame”-worthy Marvel character even before the revelation that she’s the series antagonist. Early on WandaVision largely functions as homage to classic sitcoms like Bewitched and The Mary Tyler Moore Show, and Hahn excels in capturing the cadence and energy of each era in her performances. She alone provides a sort of contained history of the art of the sitcom and its many Best Friend/Neighbor archetypes.

But Agatha isn’t just homage. She is, ultimately, an ancient witch and the series’ main antagonist. “It’s been Agatha all along,” her deliciously catchy theme song makes clear. A reveal like this would often derail the work Hahn had put into episodes prior. Instead, it allows her to shift into a new gear, channeling the sort of manic camp at which she excels in many other mainstream comedies. The only difference between Agatha Harkness and Parks & Recreation’s Jennifer Barkley (a terminally direct career opportunist) is, as it turns out, magic powers and a bitchin’ theme song.

“So effective, so memorable, so instantly memeable”

Other pieces in this series speculate on a theoretical spin-off starring the subject character. I don’t have to do that. In November, Marvel actually announced a new spin-off series for Disney+ starring Hahn back in the role of Agatha Harkness. We know little about what the show will involve, other than maybe Agatha in a mental “prison break” to undo Wanda’s spell in the WandaVision finale. But that Agatha: House of Harkness (yes, that’s the title) will be a real show is a testament to both Hahn’s talents and the appeal of her character, the best representative for all supporting characters who aren’t on the marquee but still take the spotlight.

The difference between a great performance and a great movie star performance is that the actor does not disappear into the latter. Instead they leverage the way their audience perceives them to the benefit of the role and of the film. At no point does Kathryn Hahn disappear into Agatha Harkness. Instead she absorbs her, using the framework of the character to give a performance that is singularly hers. Long live the Hahnaissance.

WandaVision is streaming now on Disney+.

It’s hard to not think of her first appearance. Sure, Kathryn Hahn’s Agatha Harkness has a number of standout moments in WandaVision on Disney+, but her entrance is ground zero for all of them. In the premiere episode “Filmed Before a Live Studio Audience,” the show aims to replicate the styles and rhythms of classic…

It’s hard to not think of her first appearance. Sure, Kathryn Hahn’s Agatha Harkness has a number of standout moments in WandaVision on Disney+, but her entrance is ground zero for all of them. In the premiere episode “Filmed Before a Live Studio Audience,” the show aims to replicate the styles and rhythms of classic…