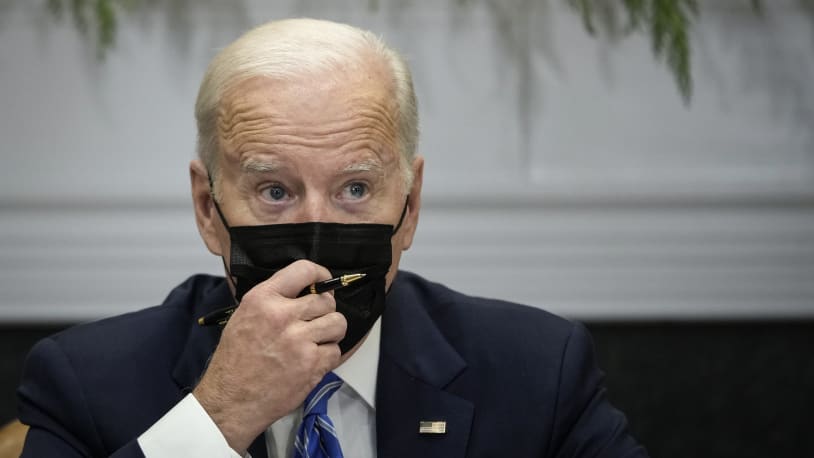 Cut Joe Biden (half) a break on the Omicron surge

President Biden has been getting a lot of flak over the Omicron stage of the pandemic, and understandably so.

The Centers for Disease Control and Prevention (CDC) recently updated its recommendation for containment periods, saying only five days of quarantine are necessary for someone with a positive case yet no symptoms. The agency didn’t recommend getting a negative antigen test before leaving isolation, which seems to serve corporate interests fearing a disruption of work more than the latest science.

That lapse is in keeping with an administration that has consistently struggled to stay ahead of the pandemic. Biden’s team indefensibly delayed extending student loan repayments and the eviction moratorium. Now there’s this, and grumpy liberals and leftists have been blasting Biden and the CDC all week.

But that criticism is only partly merited. The administration is behind the ball once again, but they’re still taking some positive steps. Moreover, the Omicron variant is so incredibly contagious a gigantic wave of infection couldn’t realistically be avoided. And we know that because European countries, many of them doing exactly what Biden ought to do, are also dealing with that inevitable wave.

First, there’s what the administration is already doing. The promised 500 million free tests are far too few, but they’re a good start, and likely only a start, as Biden’s invocation of the Defense Production Act to produce more tests will soon take hold. The president has also deployed National Guard medical personnel to virus hot spots and set up pop-up testing centers. A vaccine requirement for airline travel could even be in the works.

Then, there’s what could be improved. As biomedical researcher Dr. Eric Topol writes, there’s every reason for the CDC to recommend booster shots at four months instead of six (in keeping with the most recent science); redefine “fully vaccinated” as boosted; go ahead with requiring vaccination to travel on commercial flights (the failure to do this already is inexplicable); drastically increase the number of free tests; send free, high-quality masks to every household; and take steps to crank out the new Pfizer pill as quickly as possible, then make it free.

By the same token, the Democratic Congress could also be doing much more. As I’ve previously argued, it was grossly unfair to end pandemic unemployment benefits long before the pandemic was over. Lawmakers could have appropriated more money, too, for Biden to spend on a massive vaccine factory to distribute doses to the rest of the world (and thus head off future variants) instead of stuffing another $25 billion into the already-bloated defense budget, an addition the president didn’t even request.

But how much short-term difference would those improvements actually make against Omicron?

In Europe, Omicron is simply ripping across the continent. France, Italy, Portugal, Denmark, the U.K., and just about everywhere else are seeing record-high caseloads. Ireland and Spain are running out of tests. And all these countries have much more competent governments than the United States. All of them have the kind of free or dirt-cheap tests Biden critics (rightfully) demand, and most have some kind of test-and-trace system to keep down the spread. Yet all of them are swamped with Omicron.

The only apparent exceptions are Germany and the Netherlands. In the former, this may be an illusion, as many German regions have had reporting delays over the holidays. The Netherlands instituted a fairly strict lockdown about two weeks ago — not a bad idea to give them time to roll out boosters and flatten the curve to protect hospitals — but it is likely just a matter of time for them as well.

The plain fact is that as much as our government could do better, Omicron is one of the most contagious viruses in human history, with an estimated “reproduction number” of perhaps as many as 10 new infections per case (as compared to two or three for the original coronavirus and six or seven for the Delta variant). Omicron seemes to have a very short incubation period to boot, which makes it nearly impossible for test-and-trace systems to keep up. Only chicken pox and possibly measles can rival it. (Luckily, Omicron appears to be considerably less lethal than the Delta variant, especially to people with boosted vaccination, though it still might swamp hospital systems with the sheer number of infections.)

Even China, which heretofore had managed to stamp out the virus every time it got loose, is struggling to contain a major outbreak. And if the Chinese Communist regime — with its unparalleled ability to coerce its population through censorship, propaganda, and a highly effective police apparatus —  can’t contain Omicron, then no liberal democracy has a chance. (A key part of the zero-COVID strategy in China is forcibly stuffing entire cities of people into their homes for an indefinite period, keeping them supplied with food and other necessities. City-wide house arrest won’t happen here.)

And the U.S. is less likely to manage a super-strict Omicron response than the average Western nation. Ours is a very large country, with free movement and a considerable amount of power delegated to state and local governments. Our federal government is a janky mess at the best of times, with a lot of terrific damage inflicted by former President Donald Trump still to be cleaned up.

Worse, America has the only major party in the rich world that has mobilized hysterically against any kind of pandemic controls. That party also controls roughly half the state and local political levers of power, which it’s using to categorically refuse to do anything to stop the pandemic. Some GOP officials, like Texas Gov. Greg Abbott, have even forced businesses to not have vaccine mandates. Republicans are literally killing themselves in a deranged, semi-intentional political gambit to make the pandemic worse and tank Biden’s approval rating. Across the country, any kind of pandemic control measure inspires shrieking outrage or even threats of violence.

In that context, America never had the slightest chance of meaningfully containing Omicron. The Biden administration could be doing much better, and I hope that it continues to improve, above all with more stringent vaccine mandates. But there is only so much a president can do with a broken country, frothing-at-the-mouth opposition, and an incredibly contagious virus.

A sudden and massive wave of infection is coming to every city in the country, and there’s nothing Biden can do to stop it. If you haven’t already, get your booster now.

December 30, 2021 December 30, 2021 President Biden has been getting a lot of flak over the Omicron stage of the pandemic, and understandably so. The Centers for Disease Control and Prevention (CDC) recently updated its recommendation for containment periods, saying only five days of quarantine are necessary for someone with a positive case yet no…

December 30, 2021 December 30, 2021 President Biden has been getting a lot of flak over the Omicron stage of the pandemic, and understandably so. The Centers for Disease Control and Prevention (CDC) recently updated its recommendation for containment periods, saying only five days of quarantine are necessary for someone with a positive case yet no…