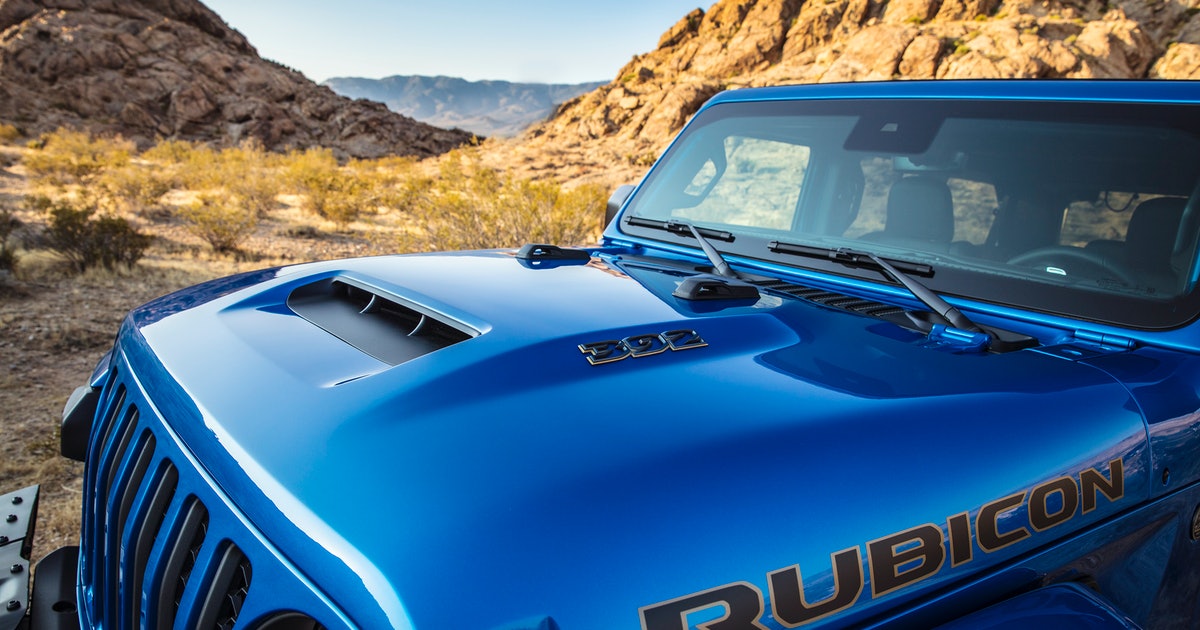 Absurd SUV reveals one thing about the future

No one asked Jeep to put a 6.4-liter HEMI V8 making 470 horsepower in a Wrangler.

The mere thought of it is preposterous. You want to put an engine designed for massive muscle cars like the Dodge Challenger in a short-wheelbase off-roader?

But preposterous is what the gearheads over at Jeep and Dodge specialize in, so they got to work creating the Jeep Wrangler 392. The result is a fully-loaded Wrangler Rubicon with a snarling V8 under the hood and a 0-60 mph time of 4.5 seconds.

And boy does it snarl. This HEMI is a beast, though a button underneath the climate controls allows you to adjust the butterfly valves in the exhaust to make it louder or quieter as needed. I left it in the louder mode.

All that power, 470 horses and 470 torques, runs through an always-on 4-wheel drive system, so it’ll actually set off without much wheelspin if you jump on it at a red light. And it’s hilarious every time, the front end rising up as the weight transfers to the rear wheels and the whole truck shaking slightly as it rockets forward with wholly unexpected speed.

Even knowing the engine that was inside and all the power, and after being warned, my passengers were still surprised at how quickly the big beast got underway. They laughed a lot too.

Of course, the whole thing is absurd. A big, torquey V8 is fun on the road, but on the trail, the torque comes all at once in a big whump. It’s not the easiest to control while rock crawling.

But to folks who will shell out the big bucks to buy this car, that fuel economy is actually a feature, and so is the big whack of torque. And big bucks it is: my test unit stickered out to $78,740, which is solidly into luxury SUV territory. Of course, a Volvo XC60 wouldn’t have been able to tackle the off-road trails in the Rocky Mountains like the Jeep did, no matter how comfortable those Swedish seats are.

But the Wrangler 392 is a swan song, like so many over-the-top internal combustion cars we’re getting these days. It’s a fitting end to a remarkable run.

And I was able to see both the end of the old and the beginning of the new. On my day off-roading in the mountains, I brought a friend along who has a Jeep Wrangler 4xe. That’s the new plug-in hybrid Wrangler, and though it only gets 20-ish miles of all-electric range on the road, in the mountains, it’s a revelation.

Incredibly, the 4xe and the 392 both make the same torque: 470 pounds-feet. But they get there in very different ways. The 4xe makes a lot of it through the electric motor at 0 RPM, ideal for slow-and-steady rock-crawling. And instead of a constant rumbling throb of noise and anger like the 392, the 4xe is happy to cruise in near-total silence much of the time.

That means you can roll down the windows and enjoy a babbling brook or listen to the birds. Or you can until your annoying V8-driving adventure partner comes around the corner and scares them all away.

But I’m in awe of the 392. I love the chutzpah to put an enormous muscle car V8 in a Jeep Wrangler, simply because it’s there, and they could. The 392 has a massive hood scoop and special badging to show people how unique and extraordinary your rig is. And when you fire it up, the bark is like no other Jeep around — and it’s far more exciting than the diminutive whirr that you get from the 4xe.

Jeep showed off a concept all-electric Wrangler earlier this year, and that truck is probably coming to fruition sooner rather than later. It makes too much sense, and Jeep is busy installing EV charging stations at off-road locals like Moab and the Rubicon trail in anticipation of future electrified adventuring.

But for a swan song, the 392 is a glorious thing and is the top of the off-road food chain for the internal combustion Jeep Wrangler. But I’ll let you in on a secret: I’d rather have the 4xe. Sometimes the future really is better than the past.

I joked above that I would always leave the Jeep Wrangler Rubicon 392’s active exhaust in the louder mode, but that wasn’t entirely true. The exhaust on the 392 is incredibly loud, and the ability to quiet it a bit is a nice one.

On two occasions, in particular, I was especially grateful. The first was when I set off at 5 AM for an off-roading adventure and I turned the exhaust down before I cold-started the 392 and woke the entire neighborhood up.

The second is on long highway journeys when the exhaust note turns from a powerful throb into an annoying throb. The Wrangler isn’t a quiet car on a good day, and when you throw the 392’s quad-tip exhaust on top, it’s nearly enough to give you a headache. Cue: quiet mode.

No one asked Jeep to put a 6.4-liter HEMI V8 making 470 horsepower in a Wrangler. The mere thought of it is preposterous. You want to put an engine designed for massive muscle cars like the Dodge Challenger in a short-wheelbase off-roader? But preposterous is what the gearheads over at Jeep and Dodge specialize in,…

No one asked Jeep to put a 6.4-liter HEMI V8 making 470 horsepower in a Wrangler. The mere thought of it is preposterous. You want to put an engine designed for massive muscle cars like the Dodge Challenger in a short-wheelbase off-roader? But preposterous is what the gearheads over at Jeep and Dodge specialize in,…

Why one delicious food can help save the planet