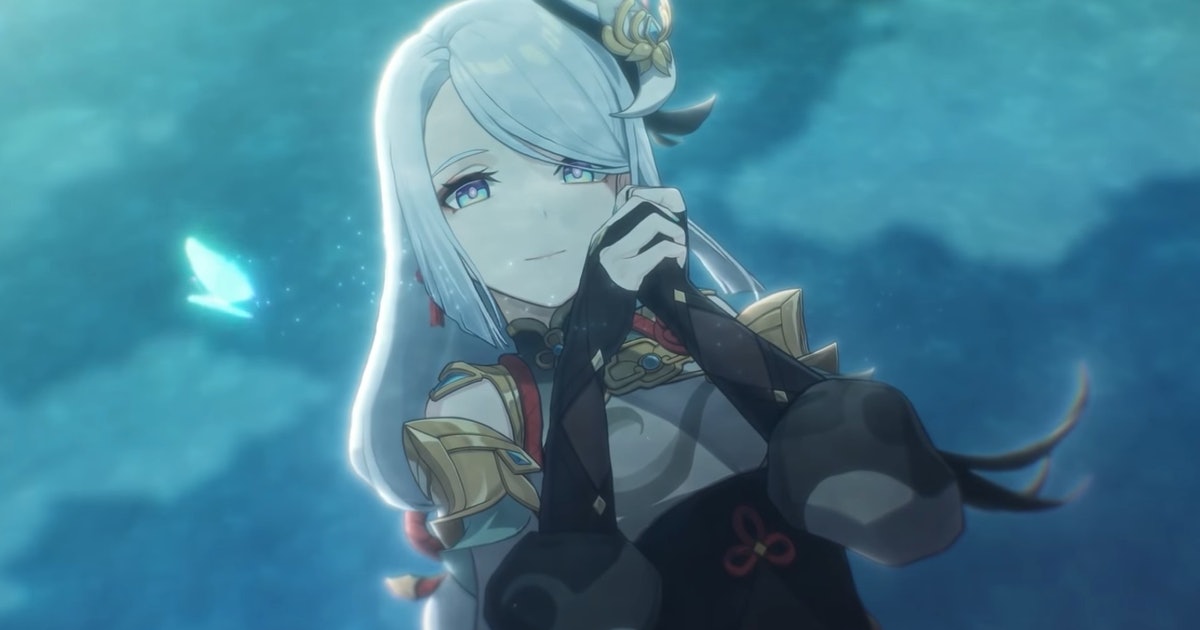 7 key items to farm for the Cryo exorcist

Version 2.4 of Genshin Impact is almost here, bringing us to the monster-filled abyssal realm of Enkanomiya and adding two new characters to the ever-expanding roster. While opera singer Yun Jin is the featured four-star that you can earn as part of the headlining ‘Fleeting Colors in Flight’ banner, Shenhe is Genshin Impact 2.4‘s newest five-star, and offers a lot of utility.

The polearm-wielding exorcist serves a similar function to Gorou, except this time it’s Cryo that’s getting specialist support. Her Spring Spirit Summoning skill can boost Cryo damage output for party members based on her attack, while her Divine Maiden’s Deliverance burst reduces Physical and Cryo resistance, while also dealing periodic Cryo damage in an AoE.

Shenhe should allow for some pretty powerful mono-Cryo parties, and considering it’s already one of the strongest elements in terms of character selection, that’s a scary thought. I dread to think what Eula or Ganyu will be able to do with the icy exorcist in tow. In this Genshin Impact Shenhe materials guide, I’ll go through what you need to ascend her and level her talents, as well as where to find those materials.

You’ll also need around 430 Hero’s Wit to level her and 420,000 Mora for the Ascension costs. This overall number will vary depending on how far you plan to ascend her, and your world level, though.

This is what you’ll need to ascend one talent entirely, so if you really want to go all out investing in Shenhe, you’re going to need three times this amount to level all her talents. You’ll also need 1,652,000 Mora per talent fully levelled.

Where to find Shenhe’s Ascension Materials in Genshin Impact

Here’s what you’ll need to level Shenhe straight away, and where you can find it:

This is the usual ascension material for Cryo characters and is earned by defeating the Cryo Hypostasis or the Cryo Regisvine bosses. You can also get it from the Primo Geovishap and Maguu Kenki boss fights. However, as Shenhe requires a material that is likely to come from the new Bathysmal Vishap boss fight in Enkanomiya, this is likely to be a far better choice for farming.

We don’t know what materials that boss drops just yet, but we do know that the two Vishaps you fight are called Bolteater and Rimebiter, making it likely that the boss will drop Shivada Jade and Vajrada Amethyst — Cryo and Electro materials respectively. Beyond completing the ‘Heart of Watatsumi’ quest to unlock the key to Enkanomiya, it’s unclear as-of-yet whether we’ll need to do something else to open the boss fight, too.

When a character drops alongside a new boss, it’s pretty usual that you’ll have to fight it to get their ascension materials. This was the case for Ayaka and the Perpetual Mechanical Array, Raiden Shogun and the Thunder Manifestation, and Itto and the Golden Wolflord. It’s pretty much guaranteed, then, that Shenhe will get Dragonheir’s False Fins from the new Bathysmal Vishap boss fight in Enkanomiya.

We don’t know all that much about the boss, other than that we’ll be fighting a Cryo Vishap and an Electro Vishap at the same time. But if it’s anything like other bosses, you’ll have to work out a consistent strategy, and then rinse and repeat to farm the materials to ascend Shenhe fully.

You can find this white flower all over Liyue, but particularly in the mountainous area around Jueyun Karst, as well as around Wuwang Hill in the north, and Mingyun Village to the east. You can see the full location list on the official Genshin Impact map. As there are 99 of the flowers dotted around Liyue, you won’t even need to do two full farms to get the required amount. You can also buy Qingxin flowers at the Bubu Pharmacy in Liyue Harbor, or grow them in your Serenitea Pot.

Nectar materials are easy to get — simply defeat Whopperflowers of different world levels. There are usually plenty wandering around, and they also appear as part of Mondstadt’s Blossoms of Wealth and Wisdom, in case you want to earn Mora or XP materials at the same time. If you’re really stuck, head to the enemy list in the adventurer’s handbook, select the Whopperflower, and you’ll be directed to one on the map.

Shenhe requires ‘Prosperity’ scrolls to level her talents, which you can earn at the Taishan Mansion Domain on Mondays, Thursdays, and Sundays. In order to speed up your farm, be sure to convert your resin into condensed resin at the alchemy table, as this will allow you to collect two lots of rewards at once. If you don’t have the condensed resin recipe, you earn it by reaching reputation rank three in Liyue.

This is one of Signora’s three boss materials that you get for defeating her at level 75. In order to unlock her, you’ll have to complete the Inazuma Archon quest, and fight her for the first time as part of the story. It’s a tricky boss fight due to the sheer cold and heat status that she applies throughout. If you’ve been unlucky in your drops, you can use Signora’s other boss materials to craft Hellfire Butterflies using Dream Solvent at the alchemy table.

Finally, the Crown of Insight is a rare material used to level a talent to its max. There are a limited number you can earn in the world — four come from offering Electro Sigils to the Sacred Sakura in Inazuma, and another comes from upgrading the Frostbearing Tree in Dragonspine. Other than these, you have to earn the Crown of Insight from seasonal events, as with Shadows Amidst Snowstorms not so long ago, or the upcoming ‘Fleeting Colors in Flight’ event.

And that’s everything you’ll need for the Genshin Impact Shenhe banner. Good luck!

Version 2.4 of Genshin Impact is almost here, bringing us to the monster-filled abyssal realm of Enkanomiya and adding two new characters to the ever-expanding roster. While opera singer Yun Jin is the featured four-star that you can earn as part of the headlining ‘Fleeting Colors in Flight’ banner, Shenhe is Genshin Impact 2.4‘s newest…

Version 2.4 of Genshin Impact is almost here, bringing us to the monster-filled abyssal realm of Enkanomiya and adding two new characters to the ever-expanding roster. While opera singer Yun Jin is the featured four-star that you can earn as part of the headlining ‘Fleeting Colors in Flight’ banner, Shenhe is Genshin Impact 2.4‘s newest…

You probably missed the most unforgettable video game moment of 2021