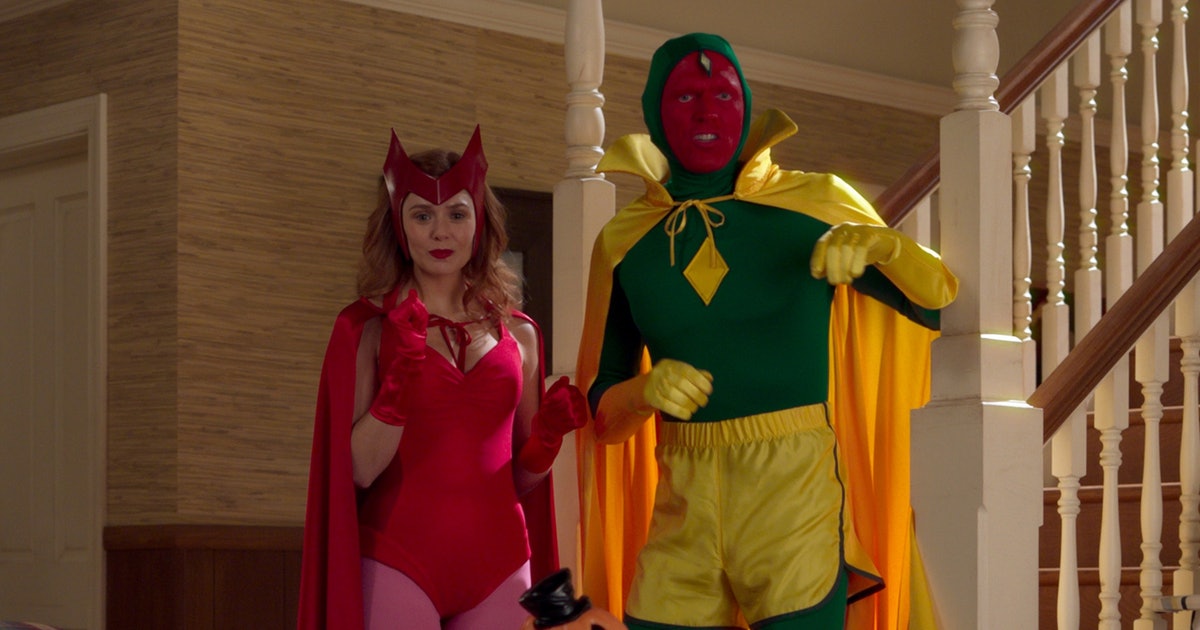 If WandaVision Episode 5 had premiered in a movie theater, its final moment would have elicited the audience’s shock, cheers, and screams — similar to what many Marvel fans experienced at their Spider-Man: No Way Home screenings just days ago.

“On a Very Special Episode…” finds WandaVision in the ‘90s with Wanda (Elizabeth Olsen) losing control of Westview and Vision (Paul Bettany) catching on to something being seriously amiss in their reality. The tension and confusion build to the couple’s first major fight. Suspended in the air and ready to charge, they are interrupted by the doorbell. Wanda opens it only to find her dead brother at the door. But it’s not exactly her speedster brother, as a shocked Darcy (Kat Dennings) remarks, “She recast Pietro?”

While Loki and No Way Home eventually blew open the multiverse, WandaVision hinted at what’s to come (even if it backtracked on its multiversal promise) with the surprise appearance of Evan Peters as the fake Quicksilver. In a series packed with energetic and charismatic performances, Peters stood out as Ralph Bohner, a spellbound man pretending to be Wanda’s resurrected brother. It was a clever — even devious — bit of casting that catapulted the series to new heights, making everyone from devotees to casual fans wonder where the Marvel Cinematic Universe was taking audiences next.

SCENE STEALERS is a countdown that salutes the unforgettable small-screen characters of the year. Ralph Bohner is #6.

Evan Peters had a banner year in 2021. In addition to his guest role on WandaVision, he won an Emmy for his supporting turn in the HBO drama, Mare of Easttown. But before the recent accolades, Peters had established himself as a chameleonic yet exuberant performer through his collaborations with producer Ryan Murphy over the past decade.

The actor played various versions of dark, dangerous, and mysterious characters over eight seasons of American Horror Story. He also stretched in his comic muscles with a supporting role in 2010’s Kick-Ass and even brought some levity to the X-Men movies as the silver-haired speedster, Quicksilver.

And it’s his X-Men role that made his appearance in WandaVision all the more surprising. For one, the MCU’s Pietro Maximoff, portrayed by Aaron Taylor-Johnson, is dead after meeting his demise in Avengers: Age of Ultron. On the other hand, since Disney acquired 20th Century Fox, which produced the X-Men films, fans wondered when their favorite mutants would enter the MCU. Would Marvel start anew, or would they try to incorporate the established X-Men screen characters into their universe?

So, when Peters’ Pietro showed up at Wanda’s door, fans thought they finally had the answer: Marvel was folding in Fox’s X-Men universe via the multiverse.

Who is Ralph Bohner?

As we eventually learn, an MCU and X-Men crossover wasn’t in the cards. Two episodes later, Monica Rambeau (Teyonah Parris) discovers WandaVision’s Pietro is actually Ralph Bohner, an aspiring actor who lives next door to Wanda’s property in Westview. When Wanda took control of the town, it caught the attention of Agatha Harkness, aka Agnes (Kathryn Hahn), and she cast a mind-control spell on Ralph and took over his home. To infiltrate Wanda’s life, Agatha made Ralph pretend he was Wanda’s brother, magically aiding him with Quicksilver’s signature speed.

While Pietro — or Fietro, as some fans call him — wasn’t the real deal, Ralph Bohner sure made an impression on the Disney+ series. Especially in the Malcolm-in-the-Middle-inspired Episode 6, Pietro/Ralph truly shines as the quirky uncle in his scenes with Wanda’s kids, Billy and Tommy. Peters matches the manic energy of early ‘00s sitcoms, making the episode’s nostalgia come to life. It’s so much fun that I can easily imagine a spin-off with Ralph, Billy, and Tommy that follows all of their silly, super-powered hijinks.

Evan Peters’ appearance ultimately accomplished one other thing. It showed how the weekly episode release schedule can still prevail in the binge-watching, streaming era. The days of watching TV live together may be drifting farther away. Yet, WandaVision, which pays homage to the classic TV, reminded us through Ralph Bohner how an absolutely surprising single moment of television still has the power to dominate the collective cultural conversation. And isn’t that what being a scene-stealer is all about?

WandaVision is now streaming on Disney+.

If WandaVision Episode 5 had premiered in a movie theater, its final moment would have elicited the audience’s shock, cheers, and screams — similar to what many Marvel fans experienced at their Spider-Man: No Way Home screenings just days ago. “On a Very Special Episode…” finds WandaVision in the ‘90s with Wanda (Elizabeth Olsen) losing…

If WandaVision Episode 5 had premiered in a movie theater, its final moment would have elicited the audience’s shock, cheers, and screams — similar to what many Marvel fans experienced at their Spider-Man: No Way Home screenings just days ago. “On a Very Special Episode…” finds WandaVision in the ‘90s with Wanda (Elizabeth Olsen) losing…