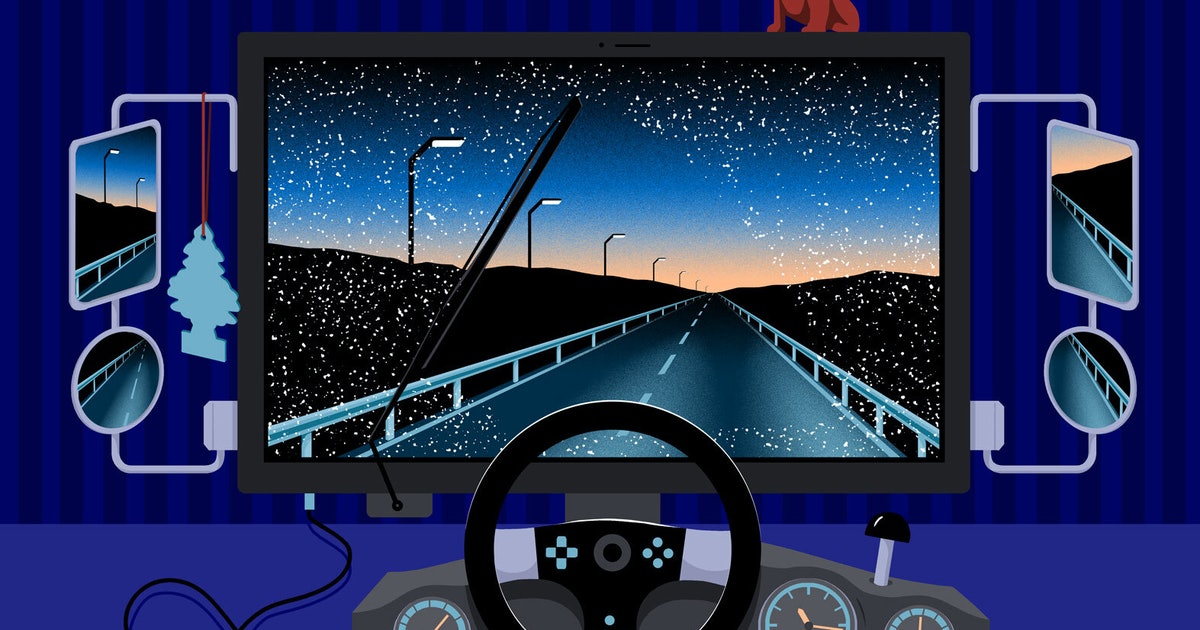 “A screensaver for your brain.” The joys of virtual trucking.

Leonard Jesinghausen still tries to recreate his childhood family road trips. The 12-hour drive from Manchester to Frankfurt is particularly filled with nostalgia.

“Whenever we used to drive to Germany when we were kids, the tradition was that when we got to Aachen [on Germany’s border] we’d always stop and have a currywurst. So at one point I drove to Germany and took a picture of the Aachen motorway sign and sent it to the family WhatsApp group,” Jesinghausen, a retail manager based in South Manchester, tells Inverse, looking faintly sheepish. “They were like, okay, what the hell is this?”

Jesinghausen’s family may have been slightly perplexed because the sign was not real. Rather, it was from a truck simulator game (or TruckSim, for short). Jesinghausen first tried TruckSim six years ago after graduating university, but his old laptop at the time made the game run “like a potato.” It was during the UK’s first lockdown in March 2020 that he remembered the game, invested in a new laptop, and became hooked.

“I’d lose track of time and end up playing it for most of the night.”

“It was almost therapeutic,” he says.” You couldn’t go abroad but you could sit there and drive in this virtual world, listening to random radio stations. It was escapism. I’d lose track of time and end up playing it for most of the night.”

Jesinghausen is far from alone on the roads. Some of his fellow TruckSim players drive as part of a company, a team of drivers pooling resources or building their own internal structure to hire out yet more truckers. Some talk to one another or a crowd of onlookers on popular streaming platform Twitch.

But many more are solo operators, accompanied maybe by the radio — a Norwegian jazz station as they course a careful path past the fjords, or old school hip-hop deep in the American heartlands. Some are devoted truckers, spending all their leisure hours on long, lonely drives. Others take time out to fly simulated airplanes or spaceships. The only thing every driver has in common is that they’re not driving at all.

As people around the world sought out ways to entertain and distract themselves from the global chaos of 2020, TruckSim — where players take on the role of a long-haul trucker and make deliveries — experienced a new resurgence. Old players returned to the game, and new users found it.

In April 2020, the two most popular truck simulator games — Euro Truck Simulator (with its creatively named sequel, Euro Truck Simulator 2) and American Truck Simulator, both made by SCS software — experienced nearly a 40% jump in users. Averaging 25,000 to 30,000 players a month between the top simulators on Steam, TruckSim doesn’t have the multi-million kind of user base of big simulation game names like The Sims or Nintendo’s Animal Crossing. What it does offer is a soothing but addictive version of the most mundane activity: driving.

Andy Kelly, a British journalist, discovered TruckSim in 2013. At the time, he was working as a journalist for PC Gamer and first installed Euro Truck Simulator as a joke.

“The cover was so plain and dull, just a static picture of a truck and a logo. But the more I played it, the more I realized that it’s actually a very good game,” Kelly says. “A lot of simulators are quite shoddy, not much fun to play, and technically quite inept and buggy, whereas this was really solid. The vehicle felt satisfying to drive, and the scenery was nice. I was kind of taken aback by how good it was. I went in thinking it was a curio to laugh at and I ended up sinking 200 hours into it over the last few years.”

The game is equal parts lonely and romantic. “It’s so pitch black that all you can see is the tarmac in front of you, lit up by the headlights, and the occasional tumbleweed rolling past,” he says. “It really does amplify that feeling of solitude.”

“I’m going down to the hardware store, getting some lumber, and building this thing.”

Kelly plays with a regular controller, but others invest significant time and money into extending the simulation aspect out of the game and into their physical environment. George Smith, a longtime gamer based in Florida, spent a week at the beginning of 2021 constructing his own “SimPit”: a rig built in the exact image of a trucker’s cabin and connected to his computer.

“I looked online and there are so many pre-done options you can buy, but I thought, I’m doing this from scratch. I’m going down to the hardware store, getting some lumber, and building this thing. I spent an hour-and-a-half in the Florida heat in a junkyard, found a chair, brought it home, and cleaned it all up,” Smith says.

To his home-built pit, he added key tech elements: a wheel with pedals and a gear stick, a monitor, a soundbar, and a tactile transducer, which translates the sounds of the engine and the road into low frequencies that shake his seat. The idea is to get as close to the experience of driving as possible. The results, he admits, are mixed. “It kind of feels like you’re sitting in one of those electric massage chairs.”

Jesinghausen, too, wanted to recreate the experience of sitting up in the truck cab. His chair features an integrated steering wheel, gear stick, and pedals, and he also attached three lights to his headphones which connect to an infrared camera on top of his monitor.

“It means that when I turn my head, the view turns in the game, so when you’re looking around, you can look out the window,” he says. “Oh god, it sounds so nerdy!”

This devotion to the experience might seem to belie the actual stakes of the game. Unlike video game classics like Mortal Kombat and Halo, or even other vehicle-led games like Grand Theft Auto and F1, the pace of play in TruckSim is deliberately slow. Game time varies depending on where you are within the map, but it’s roughly one game minute to three real-time minutes, meaning an hour’s drive becomes 20 minutes of play. The long journeys across Europe and the US — from St Petersburg to Rotterdam, Oregon to Arizona — may not take as long as the real drive, but they’re still a significant time commitment.

“There’s not much to do,” Smith says. “You don’t even have an avatar that loads the truck. You start, you’re sitting in a cab and you drive off. When you come to the end of a delivery you can pick the difficulty of parking [for points]. If you have fatigue [settings] on, you have to hit a rest stop every ten hours in game time. And you’ve gotta manage your fuel and your damage.”

“Get behind my 18-wheeler and pretend I’m driving down the rings of Idaho.”

Other simulator games — where you might be flying a spaceship, or mowing a lawn — tend to be more task-driven than TruckSim.

“I played a farming sim,” Jesinghausen says, “which was very involved in comparison. And I tried a flight simulator as well. But none of those scratch the zen-like itch the truck simulator did, where you just get into the flow. There is a gamification to it in the sense that you make deliveries and you level up, but it’s not like sitting down and playing Call of Duty, where it’s very much constant dopamine hits. It’s more of a slow-burning, self-soothing thing.”

Kelly calls it “a screensaver for your brain,” the kind of game that offers a gentle exit from daily anxieties and into an expansive — but always safe, always controlled — wider world.

“It’s the main reason I play it,” he says. “I have no real interest in trucks or the occupation of trucking or even simulator games generally. But it’s incredibly chill. There’s something incredibly serene about just rumbling along these painstakingly recreated highways, listening to the rain with the wipers swishing across the window. You really get hypnotized by it.”

Smith agrees. “There’s something very calming about it,” he says. “Even if my wife and I have been out driving around doing errands, I wanna come back and get behind my 18-wheeler and pretend I’m driving down the rings of Idaho. There are times where I’ll pull over and stop and look and see how well the coders did with the landscape and the mountains and the lake, the little train running by, just to see the beauty of what the developers have made.”

There’s not much narrative to the in-game play of TruckSim. Pick up a shipment, drive it to its destination, drop it off. But speaking to its players, a narrative arises all the same; something quiet and comforting in its loneliness, a deliberate step into solitude.

Jesinghausen says the games offer a “simulacrum of loneliness.” It’s an imaginative universe rich because it offers so little. Peace and quiet, the low hum of the radio, home behind, and the road ahead.

Leonard Jesinghausen still tries to recreate his childhood family road trips. The 12-hour drive from Manchester to Frankfurt is particularly filled with nostalgia. “Whenever we used to drive to Germany when we were kids, the tradition was that when we got to Aachen [on Germany’s border] we’d always stop and have a currywurst. So at…

Leonard Jesinghausen still tries to recreate his childhood family road trips. The 12-hour drive from Manchester to Frankfurt is particularly filled with nostalgia. “Whenever we used to drive to Germany when we were kids, the tradition was that when we got to Aachen [on Germany’s border] we’d always stop and have a currywurst. So at…

Physicists are rethinking how we measure time