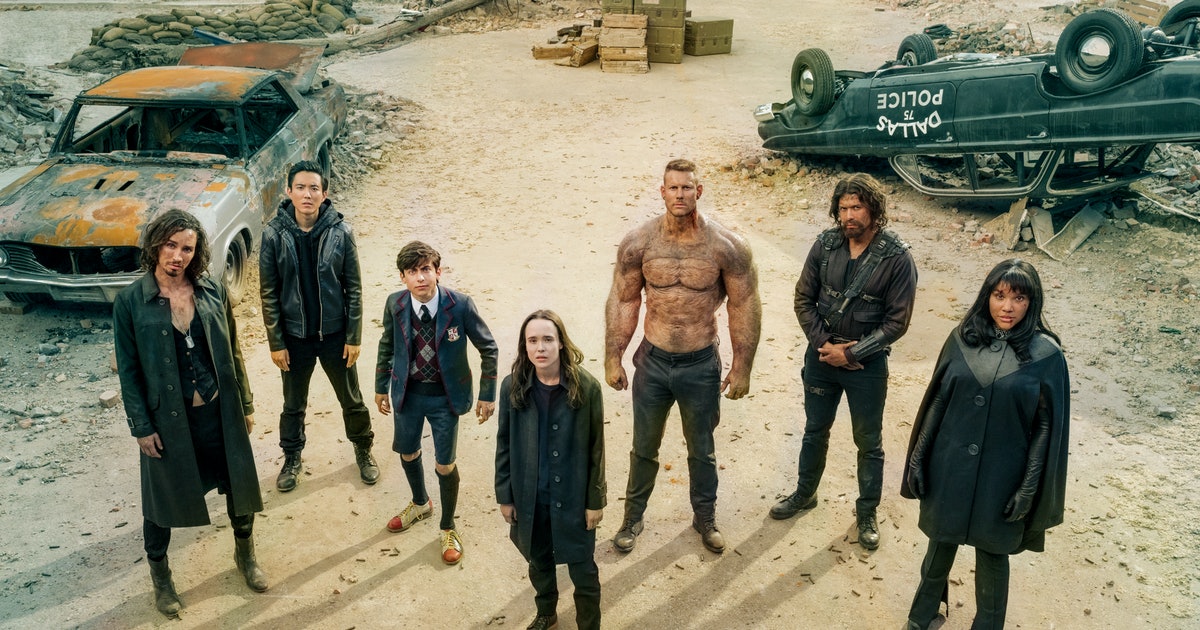 Powerful siblings unite! The Umbrella Academy Season 2 ended with the Hargreeves siblings facing down another apocalypse and actually succeeding. However, they found themselves in yet another conundrum that involved the effects of time travel, the mysterious dealings of their adoptive father Reginald, and several run-ins with the Commission, the agency that oversees and protects the timeline.

The Hargreeves — collectively known as the Umbrella Academy — believe they’ve finally stopped the apocalypse from happening and have gotten rid of the Handler, who attempted a coup within the Commission at the end of Season 2. However, upon successfully returning to 2019, they’re met with some shocking changes to the timeline, including Reginald Hargreeves back from the dead and the Sparrow Academy. Whoops!

It’s such a doozy of a cliffhanger that we can’t even speculate what happens to the Umbrella Academy in this newly warped timeline. But here’s everything we do know about The Umbrella Academy Season 3, including the plot, renewal information, and who in the cast will return.

Has Netflix renewed The Umbrella Academy for Season 3?

Yes! The Umbrella Academy is officially getting a third season. A production leak initially made the announcement, suggesting that the series would return to filming in early 2021. But Netflix officially confirmed the renewal in November 2020, four months after Season 2 debuted on Netflix on July 31. Season 3 began production in Toronto, Canada in February 2021 and will consist of ten one-hour episodes. Steve Blackman will also be returning as showrunner.

When is the release date for The Umbrella Academy Season 3?

While fans lay in wait for most of 2021, The Umbrella Academy surprised its fans with a video on its Netflix page in October 2021. The video confirmed that the series would be returning for Season 3 at some point in 2022. However, no outright premiere date has been confirmed as of yet.

What is the plot of Umbrella Academy Season 3?

The Umbrella Academy returns to an alternate timeline at the end of Season 2. The Commission is no longer in the hands of the Handler (or so we think), Lila has disappeared, and the Hargreeves return to see that Reginald (who’s supposed to be dead) has created the Sparrow Academy with Ben (who’s also supposed to be dead) as a member. Neither Ben nor Reginald have any recollection of the Umbrella Academy.

That’s a pretty exciting setup for Season 3, with the Umbrella Academy attempting to figure out all the changes and where they went wrong. Season 3 will likely answer some mysteries left unresolved in Season 2, the first being the identities of the elusive Sparrow Academy.

Speaking with Inverse, The Umbrella Academy showrunner Steve Blackman teased that the Sparrow Academy members will be explored:

“I will only say this given the fact that some of this is in the graphic novel. But they are new people. They’re not our characters. They are different people, and that’s all I can really say.”

What’s more, with Reginald revealing himself as an alien creature, it’s possible the Netflix series will address the nature of the Majestic 12, a secret society working behind the scenes throughout Season 2. Series star Tom Hopper told RadioTimes that Season 3 would be a “whole new world” for the siblings:

“We’re now taking them into this whole new world where they’re going to be tested in different ways.” Co-star Robert Sheehan added that, “They have to, with no money in their pocket, make it work. That’s what the siblings are dropped into.”

Blackman has revealed the titles for all ten episodes in The Umbrella Academy Season 3. They are:

Blackman also followed up with explanations for a few of the titles. “Kugelblitz” is a real word that describes a radiation-created black hole. Blackman said “Marigold” would hold meaning for those who are fans of the graphic novel. Speaking of which, the finale title indicates that at least some portion of the season will be spent in Hotel Oblivion, an unsettling location seen in the third volume of the comics.

In short, fans should prepare for another wild plot for the Umbrella Academy to tackle in Season 3. Hey, at least they’re not facing the end of the world again.

Who is in the cast of The Umbrella Academy Season 3?

As you can probably guess, the seven Hargreeves siblings will be back. Here is everyone confirmed to return for Season 3.

Netflix has not confirmed the return of Jordan Claire Robbins as Grace (aka, Mom). Either her casting is a secret for now (she left at the end of Season 2), or she’s not coming back at all. The latter would be a bit disappointing.

Additionally, a whole new group of characters will appear in the form of the Sparrows. Here’s a list of all of the announced Sparrows from January 2021, courtesy of TVLine:

Is there a trailer out for The Umbrella Academy Season 3?

No. All we have is a teaser from the show’s Netflix page. It doesn’t show any footage from Season 3, but does announce a 2022 release date and shows a bell to indicate the setting of Hotel Oblivion. You can watch it below.

The Umbrella Academy Season 3 releases in 2022 on Netflix.

Powerful siblings unite! The Umbrella Academy Season 2 ended with the Hargreeves siblings facing down another apocalypse and actually succeeding. However, they found themselves in yet another conundrum that involved the effects of time travel, the mysterious dealings of their adoptive father Reginald, and several run-ins with the Commission, the agency that oversees and protects…

Powerful siblings unite! The Umbrella Academy Season 2 ended with the Hargreeves siblings facing down another apocalypse and actually succeeding. However, they found themselves in yet another conundrum that involved the effects of time travel, the mysterious dealings of their adoptive father Reginald, and several run-ins with the Commission, the agency that oversees and protects…