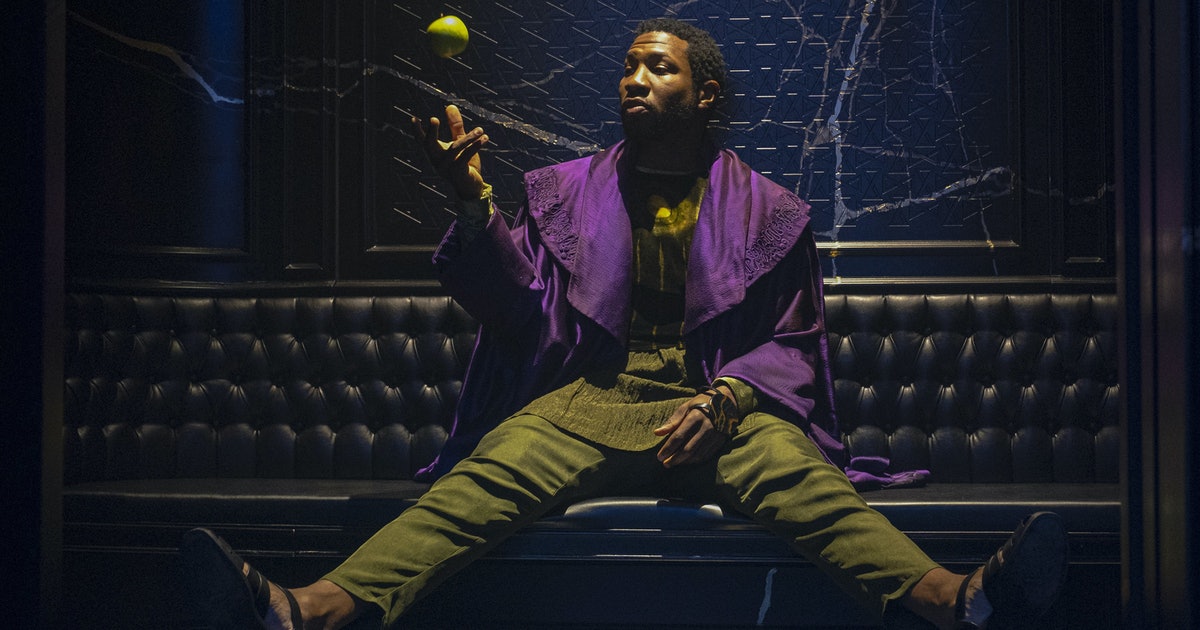 Never before has the exposition been so engaging.

In Loki’s season finale, “For All Time. Always,” Loki (Tom Hiddleston) and his multiversal “variant” Sylvie (Sophia Di Martino) arrive at the end of their journey to meet the puppet master of all puppet masters. He doesn’t have a name; he has several. We only know him as He Who Remains, played by a mischievous Jonathan Majors.

With bites of an apple and sips of tea, He Who Remains embodies all the tropes of a quintessential comic book mastermind. He isn’t imposing. He isn’t demonic nor robotic. His lair, with its scenic window view of the edge of time, is tastefully decorated with a radiant fireplace.

As Sylvie points out, he’s just a man. “Flesh and blood,” he replies.

SCENE STEALERS is a countdown that salutes the unforgettable small-screen characters of the year. He Who Remains is #11.

In all 45 minutes of the Loki finale, Jonathan Majors undeniably stole the series in his role that comic savvy readers know is, or will be, the villain Kang the Conqueror. (Listen closely for “conqueror” uttered twice.) What’s more: The role exists purely to dump comically complicated explanations about timelines and the multiverse, playing devil’s advocate to the protagonist’s proclamations of free will and fate. But through the irresistible charisma of Majors, He Who Remains succeeds in defiance of his thankless functions.

Who is He Who Remains?

A genuine surprise at the end of Loki, Majors’ involvement is juicy regardless of one’s grasp of the Marvel Cinematic Universe and its campaign for dominance of the cultural consciousness. For most, he was nothing more than a pleasant weirdo at the end of a strange saga. For the hardcore, however, he was a jaw-dropping surprise, and proof the future of the MCU is now.

In 2020, when he was killing it in the HBO series Lovecraft Country, a pulp horror set during Jim Crow, Majors was reported to join the MCU as Kang, a nemesis to the Fantastic Four (yet to join the MCU themselves) in the upcoming Ant-Man and the Wasp: Quantumania. It was all quiet on the Kang front until rumors of a surprise debut for Kang bubbled in the fringe spaces of fandom. Then came the end of Loki, with Majors’ Kang/He Who Remains sitting legs akimbo in a regal purple robe. It was like he was waiting for us the whole time.

There’s too much about the comic origins of Kang to succinctly recap. All you need to know is casting Majors was an unusual choice. Normally depicted as a purple alien, it would have been typical for Marvel Studios to cast a white British thespian and cover him in prosthetics. But you don’t cover an actor like Jonathan Majors in polyurethane.

The actor, whose career began in 2017 with the ABC series When We Rise — where Majors played real-life gay activist Ken Jones — has quickly earned acclaim for his talents. He’s academically trained (he graduated with a MFA from Yale in 2016) but a difficult upbringing involving abandonment by his military father and arrests for shoplifting in his youth provides a rare kind of insight into the human condition. Even when he’s acting as someone from the 31st century, he can still play grounded and worldly.

Majors is an expressionistic performer capable of communicating the unspoken words and feelings between lines and beats. He demonstrated this aplenty in films like 2019’s The Last Black Man in San Francisco, a dreamy ode to changes both internal and external, and in Da 5 Bloods, as the son of a traumatized Vietnam veteran. In this year’s The Harder They Fall, a masculine Majors plays real-life ex-slave turned cowboy Nat Love, a role that demands absolute cool in his character’s feverish quest for revenge.

“Succeeds in defiance of his thankless functions”

Majors was born to play He Who Remains. Who else can accomplish verbalizing out-there concepts like timelines and Multiversal Wars and still feel human? “Flesh and blood,” remember.

A guarantee of the MCU is that characters are never gone. Even his “death” at the hands of Sylvie doesn’t feel close to an end. He says as much in labored breaths: “See you soon,” like it’s a promise and a threat. And yeah, there’s still a whole Ant-Man sequel for him to star. But like Loki, it’s not hard to imagine a spin-off chronicling the Multiversal War. While the idea of a show replete with Jonathan Majors clones is absurdly amusing, one can’t deny Majors could pull it off.

The surprise introduction of He Who Remains is peak TV in 2021. Marvel Studios is serious about the interconnected relationship between its movies and TV shows. Now, audiences have too. The barriers separating movie and TV are a thing of the past. He Who Remains is its future. Even when he’s brought to an end, one can’t shake the feeling they’ve only seen the beginning.

Loki is streaming now on Disney+.

Never before has the exposition been so engaging. In Loki’s season finale, “For All Time. Always,” Loki (Tom Hiddleston) and his multiversal “variant” Sylvie (Sophia Di Martino) arrive at the end of their journey to meet the puppet master of all puppet masters. He doesn’t have a name; he has several. We only know him…

Never before has the exposition been so engaging. In Loki’s season finale, “For All Time. Always,” Loki (Tom Hiddleston) and his multiversal “variant” Sylvie (Sophia Di Martino) arrive at the end of their journey to meet the puppet master of all puppet masters. He doesn’t have a name; he has several. We only know him…

‘Book of Boba Fett’ could reveal a forgotten Sarlacc twist