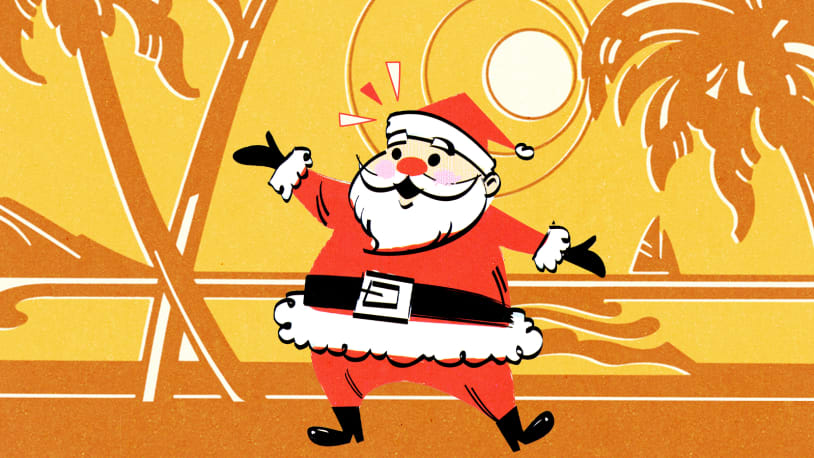 I’m dreaming of a warm Christmas

It’s the most tropical time of the year? Perhaps not for you. But for the half of the globe who celebrate Christmas during their summer, and for the good portion of the Northern Hemisphere that rarely gets cold, the idea of a white Christmas is about as fanciful as the chance of a workshop of elves suddenly fixing this holiday season’s supply chain problem.

Despite the avalanche of snow-centric Christmas stuff every year, there’s plenty of us who don’t spend our Christmastime freezing — and who like it just that way.

I don’t begrudge anyone their wintery celebrations, of course. I spent a good chunk of my adult life in New York City and can certainly appreciate the charms of a snow-flecked Christmas season. But as a native Floridian who now lives in Los Angeles, I’ve long bristled at the depictions of white Christmas as normative in popular culture. And I want to call attention to the holiday’s warmer celebrations that deserve more recognition, especially as our planet keeps getting hotter.

Considering that a majority of the world celebrates a non-cold Christmas and that the holiday’s origin story occurred in a temperate location — and probably actually took place during June — it’s worth thinking about how Christmas came to be so associated with snow in the first place. Much of it is due to the influence of Charles Dickens’ A Christmas Carol, the iconic story that in many ways helped create the way we celebrate Christmas today. The 1843 story’s snowy setting, though, is the result of what one historian has called “a mere accident of history,” since Dickens wrote the tale during an extraordinarily cold period in Britain marked by otherwise rare heavy snowfalls.

In the U.S., the popular Currier and Ives prints of snowy winter landscapes also helped create the template for American Christmas imagery. But nothing froze the white Christmas standard in the American mind more than the popular Bing Crosby song of the same name, all the more so when it became the basis of the 1954 box office hit. White Christmas takes place in a Vermont resort town where two traveling performers have journeyed to seek snow after spending their two previous holidays in South Carolina and Hawaii. “They didn’t seem like Christmases,” one of them explains. “There ought to be snow.”

Maybe not. Millions of holiday revelers around the world know there’s a lot to be said for enjoying the day outdoors, basking in good weather. In places like Australia, Hawaii, and Florida, thousands spend the day sunbathing on the beach — which seems to me a far better option than having to painfully thaw oneself out after a brief trek through a snowy landscape.

Each year, Surfing Santas crowd the shorelines in Cocoa Beach, Florida, and Santa Cruz, California, a far more pleasant tradition than the masochistic polar bear plunges to which others subject themselves in frigid locales. In the central Florida town where I grew up, one of the neighborhood moms took her family out water skiing every year on Christmas Day. Her reason? “Because we can.” Comfort and joy, indeed!

Not being cold also means Christmas dinner doesn’t have to be a retread of many of the same dishes you just ate a few weeks ago at Thanksgiving. Many Southern homes, for example, serve ambrosia on Christmas Day, because the chilled fruit salad is especially pleasing when the weather is warm. Down under, Australians often host outdoor seafood banquets. And South Africans like to spend the day outside braaing — their version of barbequing. In my book, that easily beats another tired holiday meal of turkey, dressing, and mashed potatoes.

Plus, there’s just something about a lush green environment that speaks Christmas to me in a way no whited-out or, more likely in real life, gray and rainy setting ever could. Green is one of the holiday’s colors, after all. Put on some red shorts or a polo for the family picture, and you’ve really captured the perfect look for the day. Even better if there’s a palm tree trimmed with Christmas lights in the background.

No doubt, for those who are used to bundling up and hoping for snowfall on Christmas, a warm-weather Yuletide can be a jarring adjustment, especially for the many Americans who have recently relocated from the Northeast to places like Florida and Texas in our COVID moment.

The first couple of times my now-husband, an Ohio native, came home with me to Florida for the holidays he continually voiced a complaint many of those transplants may be thinking this year: “This just doesn’t feel like Christmas,” he said as we put on shorts to watch the niece and nephew play outside with their new toys in the warm afternoon sunshine. “It feels just like Christmas to me,” I always retorted, unwilling to concede that my lifetime experiences of the holiday were anything unusual or counterfeit.

It didn’t take long for him to embrace all the pleasures of a warm Christmas, not least the schadenfreude of posting pictures of oneself barefoot beside a pool. And with climate change swiftly altering global weather patterns, more Americans may need to embrace different traditions and images of the holiday to avoid a bah humbug! attitude about the day. As experts at Weather.com wrote two years ago, thanks to a warming planet, “most of the world will never see a white Christmas.”

That’s no need to despair — although, that certainly doesn’t lessen the urgency of combating climate change. Yet when it comes to milder weather Christmases, there is so much to enjoy. Whatever the climate of your Christmas this year, here’s wishing all of you that it will be your warmest holiday yet.

It’s the most tropical time of the year? Perhaps not for you. But for the half of the globe who celebrate Christmas during their summer, and for the good portion of the Northern Hemisphere that rarely gets cold, the idea of a white Christmas is about as fanciful as the chance of a workshop of elves…

It’s the most tropical time of the year? Perhaps not for you. But for the half of the globe who celebrate Christmas during their summer, and for the good portion of the Northern Hemisphere that rarely gets cold, the idea of a white Christmas is about as fanciful as the chance of a workshop of elves…

Macbeth is a Christmas movie