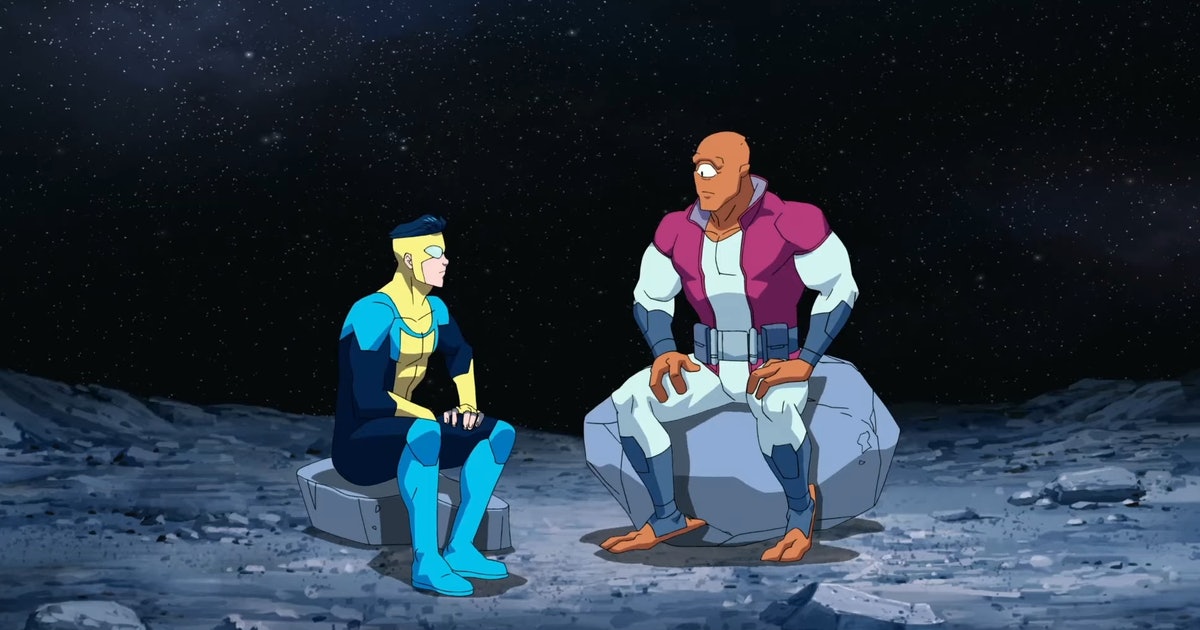 Allen the Alien shows up for roughly ten minutes in the first season of Amazon Prime Video’s Invincible, but it’s enough time to leave an impact the size of a crater.

His appearance in the season finale, “Where I Really Come From,” provides protagonist Mark Grayson (Steven Yeun) some worthwhile insight following a harrowing ordeal. Perspective is a powerful tool, and after Mark’s devastating battle with the superhero Omni-Man (J.K. Simmons), the brief chat he has with Allen, on the Moon of all places, brings closure to his hero’s journey and prepares him for the ominous threat that looms in the distance.

SCENE STEALERS is a countdown that salutes the unforgettable small-screen characters of the year. Allen the Alien is #13.

What initially brought Allen to Mark was a simple mixup. As a “Champion Evaluator” for the Coalition of Planets, Allen’s job is to test the mettle of every “guardian” put in place to protect their assigned world. But Allen was never meant to evaluate Earth, but “Urath.” This faux pas in the show’s second episode quickly squashed any beef between Allen and Mark to put them on even ground.

Who is Allen the Alien?

So when Allen returns one more time to warn of Earth’s invasion by the insidious Viltrumite Empire, it’s Mark’s lack of surprise that is the real kicker. Omni-Man — also Nolan Grayson, and Mark’s father — is really the Viltrumite put in place to begin the Viltrumite invasion. Mark’s discovery sent the two barreling through a near-death, earth-shattering, train-derailing brawl. But on the verge of killing Mark, Omni-Man flew up, up, and bailed, which baffles Allen. He knows what havoc the Viltrumites are capable of. They eradicated his planet and nearly destroyed his race of Unopan people. But what they aren’t known for is leaving a job incomplete. As Allen critically observes, it’s a detail that may work to their advantage.

Series producer Seth Rogen provides the voice for Allen the Alien, and his involvement feels like a no-brainer. His recognizable and gravelly tone adds humor and a surprisingly empathetic element to the character. Rogen’s substantial experience as a screenwriter, producer, and director within the genre world makes him a perfect addition to Invincible. Along with his collaborating partner Evan Goldberg, Rogen has already helped translate two other cult comic hits, Garth Ennis’s Preacher and The Boys, to the echelons of prestige television. Rogen’s involvement with Invincible expands beyond streaming TV, as he and Goldberg are also writing, producing, and directing the live-action film version for Universal.

Like a true Allen the Alien, Rogen saw the advantage in a comic book the mainstream didn’t recognize. “To us, the less people know about the source material in some ways, the more exciting the opportunity,” Rogen told Mashable. “That’s one of the things that Preacher and The Boys and this has been really amazing to do, is that they’re amazing and they have huge followings, but they’re not nearly as famous as Spider-Man or Batman or Superman.”

“A casual sense of levity, especially amid the chaos”

Rogen’s familiarity with Robert Kirkman’s 144-issue comic epic, as well as his own experience telling stories in front of the camera and behind the mic, gives him an all-knowing view from the top. Considering that Allen is in charge of evaluating the strength of each planet, it’s not a stretch to say that Rogen does the same thing, ensuring every piece in the narrative puzzle is properly set.

So far, we’ve only seen Allen bro-down with Mark on the Moon. Their intimate rockside chats offer a casual sense of levity, especially amid the chaos that brings Mark to his breaking point. But what’s Allen like on other planets? What other characters does he come in contact with? And what, exactly, is his process in evaluating each protector to make sure they’re fit to maintain their planet’s safety? These are just some of the questions that would be answered in our Invincible spin-off series, Allen: the Alienator. In each episode, the cringe comedy would unfold as we’d watch Allen do his evaluations. Will he always succeed in upholding the agenda of the Coalition of Planets? Or does Allen make more mistakes, resulting in a comedy of errors of galactic proportions? Tune in this fall to find out…

During a type when superhero stories have saturated the market, Invincible swoops in to kick the genre in the proverbial teeth — and delivers an emotionally violent, thoroughly engaging, comic book-themed trip, in the process. Amid all the show’s complexities, Allen the Alien’s amusing error offers a little reprieve. He gives both Mark and the audience the chance to take a second, catch a breath, and fly outside the atmosphere to see the bigger picture. Rogen’s subtle performance, and Allen’s empathetic understanding of Mark’s plights, remind us if only for a moment, that we all have the power to persevere and shoot for the Moon.

Allen the Alien shows up for roughly ten minutes in the first season of Amazon Prime Video’s Invincible, but it’s enough time to leave an impact the size of a crater. His appearance in the season finale, “Where I Really Come From,” provides protagonist Mark Grayson (Steven Yeun) some worthwhile insight following a harrowing ordeal.…

Allen the Alien shows up for roughly ten minutes in the first season of Amazon Prime Video’s Invincible, but it’s enough time to leave an impact the size of a crater. His appearance in the season finale, “Where I Really Come From,” provides protagonist Mark Grayson (Steven Yeun) some worthwhile insight following a harrowing ordeal.…