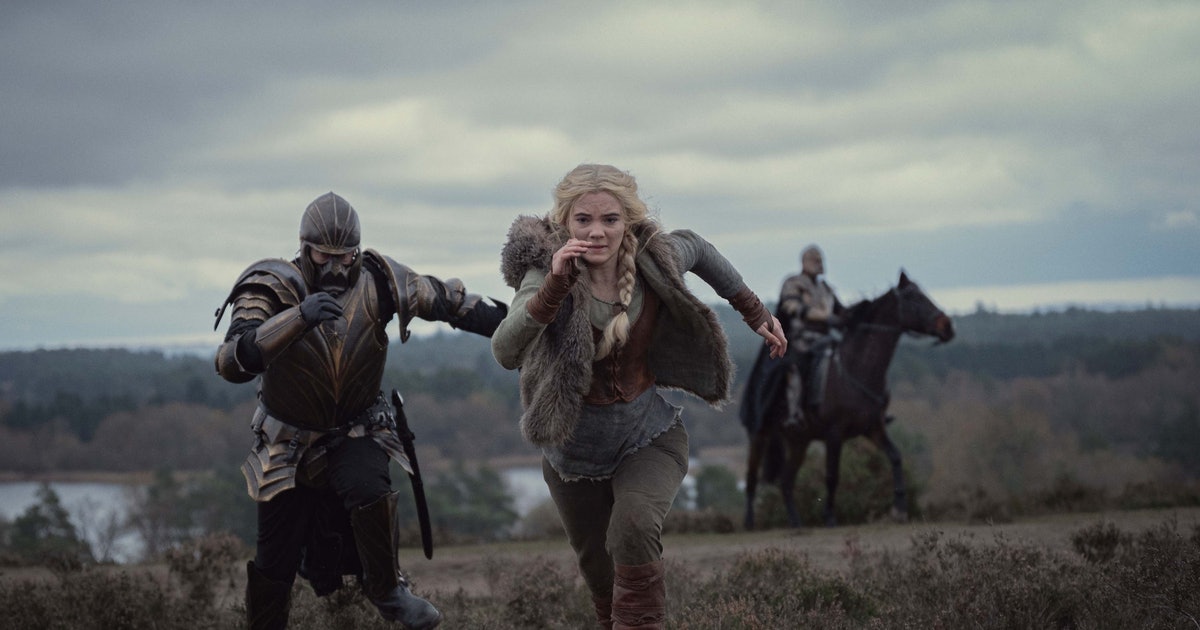 The Witcher may center a male hero, but it stands on the strength and vulnerabilities of its women.

For two seasons of The Witcher, showrunner Lauren Schmidt Hissrich centered female characters with all different kinds of motivations, broadening the possibilities of female characters in fantasy. They are driven by their wants and desires, propelled by the choices they make and the consequences that follow. They have all suffered some form of trauma, but it’s never their sole reason for existing in the story.

Because Season 2 allows its women to have it all by showcasing a wide range of female empowerment, rage, chaos, and love, it sets up Season 3 to transform The Witcher into a truly feminist show, continuing to subvert expectations through the stories of Yennefer (Anya Chalotra), Fringilla (Mimi Ndiweni), Ciri (Freya Allan), and Francesca (Mecia Simson).

Yennefer loses her magic in Season 2 due to using fire magic at the Battle of Sodden. Fire magic is forbidden because of its all-consuming nature; we saw this in Season 1 when the Nilfgaardian mages burned to ash moments after using it. For Yennefer, her price was her connection to Chaos, a kind of elemental magic harnessed by mages.

Despite fire’s forbidden nature, Yennefer used it to defeat the Nilfgaardian forces also represented a moment of real emotional power. For decades, Yennefer has tried to gain back her ability to have children while not giving up her magic. Part of Season 1’s brilliant manipulation of time conveys the monotony of a near-immortal life. Years pass in the blink of an eye, yet Yennefer does not change. She grows frustrated by the never-ending days of the pointless bureaucracy at court.

When Yennefer lets out her scream and showers the Nilfgaardian armies in the fire, it’s Yennefer finally letting go of the chaos inside her — all of her frustrations, her grief, her love, and her desires all poured into this moment of fiery rage. It’s the opposite of what she’s been told to do: control the Chaos so it can’t control you. Instead, it allows her to express everything she buried inside her for decades fully. That complete acknowledgment of her whole self saves the day.

Season 3 will mark a stark contrast for Yennefer.

When the Deathless Mother offers to restore her connection to Chaos, Yennefer latches onto the deal despite knowing the demon is manipulating her into it. She tells Tissaia (Myanna Buring) in Season 2 Episode 3, “What is Lost,” that without magic, she is nothing. Her choice sends her on a path to confront her two desires in life: power and the love of family.

But The Witcher understands life is more complicated than that. People can have more than one thing. Yennefer steals Ciri from Geralt (Henry Cavill) to take to the Deathless Mother in exchange for her power. Still, upon realizing her love for Ciri and the significance she presents for the world, Yennefer sacrifices herself to save Ciri. She gives up the chance to gain her magic back in a selfless act of love. In turn, she’s granted her connection to Chaos once again.

For the first time since Yennefer chose power over love in Season 1, these two desires are allowed to coexist within her. Chaos is restored to Yennefer, and she’s found her way back to Geralt, with Ciri as the daughter she’s always wanted.

Season 3 will mark a stark contrast for Yennefer after spending two seasons searching for something to fill the void inside her. Now, she finally has something to fight for, and her focus likely will be on keeping Ciri safe. However, having what you want means you have everything to lose.

To prove Season 2’s focus on complex female characters, you need to look no further than Ciri. No more is she the little girl running through the woods toward a fate she does not understand. In Season 2, Ciri forges her own path.

As otherworldly monsters and leaders of The Continent hunt Ciri, the former princess immediately begins Season 2 searching for answers. While Season 1 featured Ciri stumbling around and happening upon her plot for an episode, Season 2 allows her to explore multiple facets of her new reality.

Surrounded by witchers at Kaer Morhen, she wants to become one of them. “What is Lost” has her attempting the witcher’s training course. Lambert (Paul Bullion) and Coen (Yasen Atour) start the episode by mocking her about her privileged upbringing at Cintra. Still, by Ciri’s third attempt at completing the obstacle course, they’re mentoring her through each step and summon Geralt to witness her progress. After a few missteps with the other witchers, they become fast friends and family, teasing each other as siblings.

The stakes continue to rise for Ciri as she heads toward her destiny.

But in “Redanian Intelligence,” Triss (Anna Shaffer) appears at Kaer Morhen as a reminder of Ciri’s feminine side. Dressed in elegant gowns, Triss is a clear standout amongst the grimy witchers, which Ciri notices. Season 1 saw Ciri bound by her duties to the crown. She would dress as a boy to play games with other kids her age, always caught between two worlds. Here, once again embracing her past, Ciri’s allowed to exist as both a witcher-in-training and a mage-in-training.

Ciri’s story is very much a coming-of-age one, so she’ll continue to learn about her past and the power she holds. Though Ciri may begin Season 3 guided by Geralt and Yennefer, she’ll have to venture out on her own to face the things that hunt her head-on soon. Like Yennefer, the stakes continue to rise for Ciri as she heads toward her destiny.

An Alliance of the Faithful

Season 2 sees Francesca and Fringilla depart the Deathless Mother’s hut with an alliance between Nilfgaard and the elves now set in stone. To convince them to agree to the alliance, the Deathless Mother appeared to them as Ithlinne and Emhyr, respectively.

However, Francesca and Fringilla are not easily manipulated. Their decision to move forward with the alliance despite knowing the Deathless Mother’s influence, like Yennefer, makes their story even more intriguing. Fringilla states to Yennefer that she’s allowing faith to guide her, while Francesca is operating under the promise of a prophecy. It’s full of hubris on both sides, but to a certain degree, Francesca and Fringilla’s goals and calculations are noble, turning this drama into one about the consequences of said hubris and not merely about the revelation that the Deathless Mother played a role in it.

Though their story takes up considerably less screen time than Yennefer and Ciri, it’s refreshing to see morally complicated women not solely driven by the aspirations of men. Francesca is the leader of the elves. What’s more, her pregnancy does not diminish her ability to lead them. Fringilla has to navigate her slippery standing amongst the Nilfgaardian soldiers, namely the Black Knight Cahir (Eamon Farren), with the ever-present threat of Emhyr’s return. Fringilla finally strikes in Season 2 Episode 7, “Voleth Meir,” using magic to take out the men who had started questioning her ability and importance to Nilfgaard.

While the end of Season 2 sees Yennefer and Ciri in a good place with otherworldly forces hunting them, Francesca and Fringilla are facing setbacks due to the decisions they made this season. Fringilla now finds herself in the bad graces of Emhyr, having lied to him about the murder of Francesca’s baby. Francesca ignored the warnings of those around her about the feeble loyalty of Nilfgaard, thus sending her on a revenge path, murdering other innocent babies.

Season 3 might be when we get to see Fringilla and Francesca in action. Most of Season 2 had them strategizing with each other in the shadows of Cintra; now that darker forces are at play, they might have to rely on each other even more to get out from under the influence of Emhyr. Now in Cintra, we’ll likely get to see more of Fringilla’s backstory, her relationship with Emhyr, and how the fallout of him murdering Francesca’s baby will affect the truce between the two women.

For The Witcher to sustain this momentum of fully realizing its women characters, Season 3 must continue letting them make decisions based on their aspirations. Fringilla and Francesca especially deserve adequate screen time to explore their bond and impending fallout. Wherever those decisions take them is for the fates to decide, but the journey will be well worth the weight in coin.

The Witcher Season 2 is now streaming on Netflix.

The Witcher may center a male hero, but it stands on the strength and vulnerabilities of its women. For two seasons of The Witcher, showrunner Lauren Schmidt Hissrich centered female characters with all different kinds of motivations, broadening the possibilities of female characters in fantasy. They are driven by their wants and desires, propelled by…

The Witcher may center a male hero, but it stands on the strength and vulnerabilities of its women. For two seasons of The Witcher, showrunner Lauren Schmidt Hissrich centered female characters with all different kinds of motivations, broadening the possibilities of female characters in fantasy. They are driven by their wants and desires, propelled by…

Matrix 5 and 6 release date, trailer, plot, cast for the next Wachowski sequel