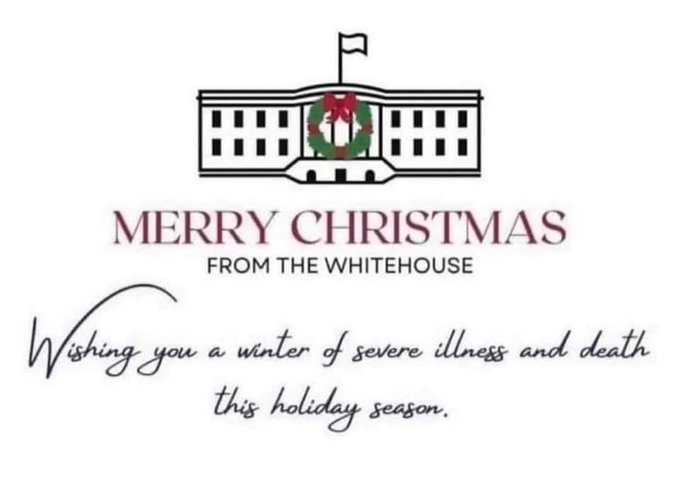 Posted by Maggie on December 22, 2021 in From the editors

And so … This morning I’m hearing media mentions of one particular moment in Biden’s COVID speech of yesterday afternoon. Which moment, you ask? Well, I’ll get to that in a moment… It is continually said that Biden (allegedly) won the 2020 election because of his COVID playbook. However, a year after the tail end of Biden’s 2020 campaign where he lambasted then Pres. Trump for “not having a plan or doing anything to combat COVID” and even going so far as blaming Trump for the COVID deaths under his watch and claiming he would do something and save everyone, here we are almost a full year into Biden’s administration and COVID deaths in that time have outnumbered those during Trump’s time in office with the virus…

Which brings us to this…

This was a lie.

It was a lie because nobody can shut down the virus.

Government does not have the power to end disease…

That said, in Biden’s regurgitation of “ideas” on battling COVID to the American people yesterday he again blamed the unvaccinated while contradicting his own Press Secretary on making rapid test kits widely available to everyone.

But the moment I’m referring to is when Biden, after nearly a year of taking full credit, finally gave Pres. Trump credit for the “Operation Warp Speed” development of COVID vaccines. This is where I again remind you that during the rhetoric-heated 2020 campaign both Biden and Harris said they didn’t trust these same COVID vaccines because “Orange Man BAD!”, or something. But then took credit for the damn shots, claiming they didn’t exist before January 20, 2021 before the ink on Biden’s inauguration was dry. Oh, and don’t forget old Joe claiming there was no vaccine even after getting his jab exactly a year ago December 21, 2020…

A year later he joins the left bullying and demonizing Americans who are not only making the personal choice to hold-off on taking the yearling still-experimental drug but are very VERY hesitant and opposed to allowing their own children to have it. But it must be pointed out that Biden and Harris and others who were so outspoken against the “Trump vaccines” (which are now the Biden vaccines) are indeed responsible for a Hell of a lot of people who have not taken up the government offer of “free lunch’ in their arms.

I know. I know. It’s redundant. Right? But we are talking about a weak-assed career plagiarizing politician who has spent half a century in DC with not much to show for it but somebody else’s accomplishments that he tags with a “We” or “I”. But now old Joe is crediting and praising Pres. Donald Trump for the vaccines??? Think about that, and in the other hand weigh this last year of the vaccines’ less-than-stellar record in protecting people from the virus and bringing the numbers down, including breakthrough hospitalizations and even deaths … and that doesn’t even touch on the unreported major side-effects on some who have taken the full doses and now the boosters. So, why now? Why is Biden giving Trump credit? Apparently, I am not the only one who has this thought…

Oh, don’t doubt it. Leftists do nothing out of the goodness of their hearts.

Twitchy: Former President Trump says he’s ‘very appreciative’ of President Biden crediting his administration on vaccines … Sorry, Mr. President, but this is one of those times to look the Trojan gift horse squarely in the mouth.

Meanwhile, this is sound logic at this point after nearly two years of the government and its MSM pretending political science is actual science in the face of this particular virus…

NYPost: Biden needs to face the new reality of COVID-19

Let’s all hope the nation can get a grip on the new world of COVID, with President Joe Biden on Tuesday finally prioritizing practical measures that match the new environment we face.

One good sign: Top White House aides are pushing to stop treating cases as the main measure of the coronavirus threat — as we have been advocating for months — since a positive test no longer equals that significant a mortal risk.

Vaccinated people — which is now most American adults and an even higher share of most-at-risk seniors — who get a breakthrough case are unlikely to have severe symptoms. Indeed, at least 40 percent of Omicron cases are proving entirely asymptomatic, and the Moderna and Pfizer vaccines that dominate in this country are highly effective against it causing severe illness.

Yet even South Africa, where a smaller proportion of the public is vaccinated, is seeing Omicron as far lower-risk: Its first-hit capital region is already past the peak, while doctors there report hospitalizations from Omicron are less than a tenth the rate for Delta.

Washington, and the world, needs to stop pretending we’ll ever get to zero new infections: This bug, like the flu a century ago, will remain endemic — but not a major concern.

Yet public health “experts” continue to push measures that might have made sense early in this pandemic, when so little hard info was known, but clearly don’t hold up now…

In my limited scientific knowledge of how nature works, I ponder the variants being nature’s way of naturally immunizing people’s bodies with far less weaker strains in order for our own antibodies to build against it. As our scientific/medical community continues to struggle with better vaccines, they must now also give equal important attention to therapeutics, and yes, those therapeutics that were scoffed at and even banned (and the doctors that dared use them on their patients demonized and ‘canceled’ and their data buried especially online) that had good results for some who were sick with COVID and took them, possibly/probably saving their lives…

VIDEO: Dr. Marty Makary: We need to start talking about these COVID treatments

Stephen Nelson: Biden insists nobody ‘anticipated’ Omicron surge while defending admin’s sluggish response … Seriously? Really? And you/they have been hammering the rest of us to listen to and follow the “science”??

In a legitimately deadly viral pandemic, with genuinely safe and effective vaccines, who would be most anxious and fearful of the virus itself?

Wouldn’t people be fighting to GET the treatment?

Would you need to cajole or coerce anybody?

The ‘selfish’ and ‘uncaring’ people would be those who take 2 or 3 doses for themselves, whilst others have not had a single one. 🤔

All of this illogical, divisive, tyrannical BS is going to collapse on itself.

You win by not playing the game.

Rich Edson: Harvard professor Charles Lieber convicted of hiding ties to China: Federal prosecutors say Lieber signed a contract with the Wuhan University of Technology for $50K a month and over $150K in living expenses

It is also (past) time to finally admit these last two years have been one “man-made” crisis after another (not the least of which is the lab created bio-weapon virus that started it), dragging this country (and the world) through a major clusterfuck of epic proportions … and intentionally so, at every level.

To put it simply, if you have been living vaccine-free, your time is up. If you wish to live life as w/the ease to do the things you love, you must be vax’d.

This health order may pose an inconvenience to the unvaccinated, and in fact it is inconvenient by design.

Twitchy: Mayor Lori Lightfoot: ‘To put it simply, if you have been living vaccine-free, your time is up’ … Exsqueeze you, wut??!!??

She talks tougher about the unvaccinated than she does about violent criminals https://t.co/smoFY9Btws

If you were worried about peoples’ lives, why aren’t you doing anything about the shooting gallery your city is?

NYC Mayor de Blasio says a ‘vaccination team’ will come to your house, give everyone in your family the booster shot and $100 pic.twitter.com/WrOzOktbbA

Alison Durkee @ Forbes: NYC To Pay $100 To Recipients Of Booster Shot Amid Covid Surge … And where exactly is Comrade Bill getting all those $100 bills to hand out … From his wife’s stash of the city’s “missing” $850,000,000 she she was responsible for?

Twitchy: People are not impressed with this New York Times list of Omicron symptoms

It’s still too early to know exactly how, or if, symptoms of Omicron differ from Delta, experts say. Here’s what we know so far. https://t.co/GNJBhfySeY pic.twitter.com/5JckhDKZd2

So how I feel every morning from 2019 backwards around this time of year. Better go back inside & only wave to my family outside my window.

No, the pro-lockdowners aren’t bots. They’re real people. The idea might scare you but these people live among you and they want to take away your rights. They are legion.

They are also in the vast minority, and people need to wake the F up and push back.

BREAKING REPORT: US Army is set to announce it has developed a SINGLE VACCINE that protects against ALL variants of COVID and SARS..

Wednesday, and as Rod Serling used to say, “submitted for your approval.”

Some time before Tuesday, November 8th, 2022, the junta that is now controlling our government is going to declare a state of emergency, most likely as a result of the Phi Beta Kappa variant of the original Chinese Lung AIDS, and suspend the midterm elections. The reason will be to protect the health and safety of the American people. Naturally, the US military will be called in to use deadly force on anyone who protests, since protesting is a threat to our collective health and safety.

If anyone would have said this even in the run up to 2020, I’d have called them a tinfoil hat nutter. Now? After everything we have been subjected to for the past “two weeks” (91 in human years), that ain’t just Kreskin channeling the spirit of Nostradamus. If, and as I always use now as my standard qualifier, Dao-Min Yen is not going to be a factor, the Democrats are facing a wipe out to end all wipe outs at the polls. Having come within one vote of putting the final nail in the coffin that was the Constitution, they are not going to be denied…

Posted by Maggie on December 22, 2021 in From the editors And so … This morning I’m hearing media mentions of one particular moment in Biden’s COVID speech of yesterday afternoon. Which moment, you ask? Well, I’ll get to that in a moment… It is continually said that Biden (allegedly) won the 2020 election because of his COVID playbook. However, a…

Posted by Maggie on December 22, 2021 in From the editors And so … This morning I’m hearing media mentions of one particular moment in Biden’s COVID speech of yesterday afternoon. Which moment, you ask? Well, I’ll get to that in a moment… It is continually said that Biden (allegedly) won the 2020 election because of his COVID playbook. However, a…