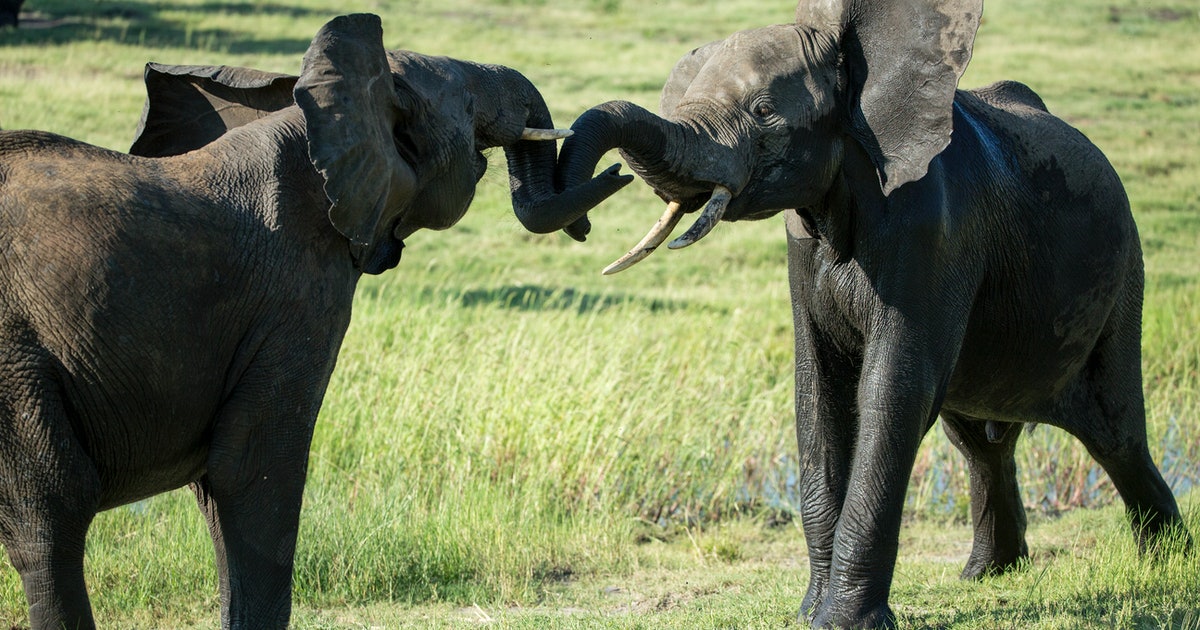 It’s no exaggeration to say African elephants are in the fight for their lives.

The multiple threats that imperil African elephants range from commercial development to climate change, but one of the greatest is human-elephant conflicts. Poachers slaughter elephants for their tusks, and humans who live in nearby areas also face ongoing threats from elephant encounters.

But according to a study published in the journal Proceedings of the Royal Society B, researchers may have found a way to reduce aggravated human-elephant conflicts through the natural hierarchy of male-dominated elephant societies.

“Elephants are highly social animals. This study clearly shows how wildlife management can be informed by how elephants interact and react to each other,” Lauren Brent, a co-author on the study and an associate professor from the University of Exeter, said in a press statement.

How they made the discovery — Scientists conducted the study in Makgadikgadi Pans National Park, adjacent to the Greater Khumaga region of Botswana, which has the highest reports of human-wildlife conflict in the country. Conservationists regard Botswana as one of the last safe havens for elephants on the continent.

Ninety-eight percent of elephant sightings in this area are also males — likely not a coincidence. Most male elephants spend the majority of their lives in all-male groups.

“Currently, we know comparatively little about the factors that influence aggressive behaviors in all-male groups,” write the researchers.

Adult or “bull” male elephants may periodically display aggression, such as charging toward other animals or even humans while in a state known as “musth.” The researchers wanted to turn their attention to younger male elephants instead, whose aggressive behavior is less understood.

To test their hypothesis, researchers filmed individual elephants at common social gatherings sites near the Botete River at the border of the national park. The researchers parked their vehicle at a safe distance away from the elephants while filming.

What they found — The scientists identified three key findings that show the vital role of older male bull elephants in keeping younger members of the group calm.

Connie Allen of the Exeter’s Center for Research in Animal Behavior, lead author on the study, said in a press statement:

“It appears the presence of more knowledgeable, older elephants in groups may play a key role in keeping the younger, less experienced males calm and lowering their perception of their current threat level, which means there’s less risk of aggression towards humans and other species.”

Why it matters — More than 70 percent of residents in this area of Botswana reported that elephants threaten their safety. Elephants, in turn, face threats to their safety due to increased human-wildlife conflict, land development, and poaching — which is on the rise in Botswana.

Therefore, reducing potential human-wildlife conflict is paramount — for both the safety of humans and the long-term survival of African elephants.

Poachers often seek older male bull elephants due to their tusks, but removing these elephants could exacerbate conflict between animals and residents, the research suggests. Keeping older males in the presence of juvenile males may be crucial to ensuring good human-elephant relations moving forward.

“These findings provide an important message for wildlife managers and suggest that the removal of old male elephants from populations could lead to an increase in human-wildlife conflict,” Darren Croft, a co-author on the study and a professor of animal behavior at the University of Exeter, said in a press statement.

What’s next — The findings are intriguing, but more work needs to be done to build upon their initial research.

Abstract: Males in many large mammal species spend a considerable portion of their lives in all-male groups segregated from females. In long-lived species, these all-male groups may contain individuals of vastly different ages, providing the possibility that behaviours such as aggression vary with the age demographic of the social environment, as well as an individual’s own age. Here, we explore social factors affecting aggression and fear behaviours in non-musth male African elephants (Loxodonta africana) aggregating in an all-male area. Adolescent males had greater probabilities of directing aggressive and fearful behaviours to non-elephant targets when alone compared to when with other males. All males, regardless of age, were less aggressive toward non-elephant targets, e.g., vehicles and non-elephant animals, when larger numbers of males from the oldest age cohort were present. Presence of older males did not influence the probability that other males were aggressive to conspecifics or expressed fearful behaviours toward non-elephant targets. Older bulls may police aggression directed toward non-elephant targets, or may lower elephants’ perception of their current threat level. Our results suggest male elephants may pose an enhanced threat to humans and livestock when adolescents are socially isolated, and when fewer older bulls are nearby.

It’s no exaggeration to say African elephants are in the fight for their lives. Earlier this year, the IUCN Red List of Threatened Species elevated African savannah elephants (Loxodonta africana) from merely “vulnerable” to “endangered” as their numbers precipitously decline. The multiple threats that imperil African elephants range from commercial development to climate change, but…

It’s no exaggeration to say African elephants are in the fight for their lives. Earlier this year, the IUCN Red List of Threatened Species elevated African savannah elephants (Loxodonta africana) from merely “vulnerable” to “endangered” as their numbers precipitously decline. The multiple threats that imperil African elephants range from commercial development to climate change, but…