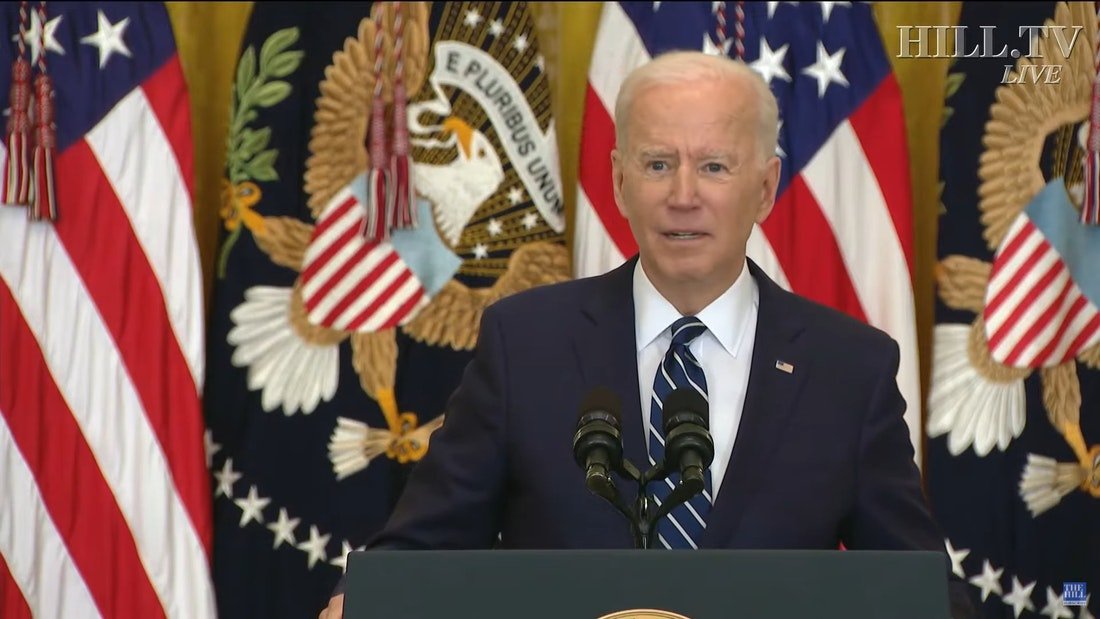 Rather than manipulate the public, why can’t our elected leaders treat us as adults capable of making our own decisions?

First, Senator Joe Manchin puts the final nail in the coffin of the Build Back Better tax schematic — a combination of fiscal realities, doing what is best for West Virginia, and 6% inflation which will only be made worse through yet another round of multi-trillion dollar government spending programs. Turns out, cutting a pizza into eight pieces rather than six doesn’t magically make more pizza.

Second, the Russian Federation appears to be gearing up for a winter offensive in the Ukraine, with over 100,000 troops stationed in the Crimea, near the Donbas (Donetsk Basin) region, and faraway Yelnya which seems poised to strike either towards Belarus and/or nearby Lithuania.

To date, the Biden administration has threatened sanctions as a deterrent while Putin continues to indicate that he is prepared to bleed for Kiev — the ancestral birthplace of the Russian people.

Now there is a chance that Putin is merely posturing and is merely bargaining with the threat of force. Yet every week that passes by, the gambit becomes a bit weaker unless Putin acts decisively one way or the other. Should Putin act, half-measures will be off the table as the United States is in no condition to counter both Russia in the Ukraine and China in Taiwan (or Iran in places such as Iraq and Syria).

Longtime readers will know that I am very much a realist about the impact of COVID. One doesn’t have to live in fear, but just like any copperhead in the woods, one should treat this with due respect. Wear a mask on planes, don’t bother outdoors. Yes, there are sound medical reasons why certain people do not want to be vaccinated — and yes, there are sound medical reasons to get vaccinated.

To wit? Former President Donald Trump not only has had COVID but has also elected to get vaccinated and boosted. Not that it pleased everyone:

The good news? The newest Omicron variant appears to be particularly mild compared to Alpha and Delta, especially for those who have already received the second dose jabs.

The not-so-good news is that Omicron is more virulent than Delta — about R<3.7 — and is swamping emergency rooms in Virginia and elsewhere. Which means that apart from all the other diseases and conditions our health care system is treating as a shared resource, our doctors and nurses must now take on the additional burden of treating Omicron patients — which means routine care becomes more strained and people fall through the gaps.

Click here for a helpful infographic from the University of Virginia as to the potential and predicted impacts of the new Omicron variant.

What bothers me and most other about the Biden administration’s condescension towards their fellow Americans is the sneering — or worse, the wish for a “winter of severe illness and death for yourselves, your families, and the hospitals you may soon overwhelm.”

They really do hate us.

Which is to reinforce a point. For the last two years, various state governors in cooperation with the wider media have seen fit to manipulate rather than inform the public — to treat us as subjects to be managed rather than citizens to be informed.

I’m sorry — but that’s wrong. Not only is it objectively wrong, but it is something that the political left seems to miss as they wonder aloud as to how Biden’s press statement comes off as sounding ridiculously obtuse:

Yet the Hillary Clinton position of “peer pressure and shaming” — coercion, folks — seems to be the modus operandi of most of what the political left does nowadays, whether it is Critical Race Theory or gender ideology or double masking back in March before the Centers for Disease Control countermanded Dr. Fauci’s order.

For myself, I’m more than a little tired of watching public relations types go out of their way to manipulate the public.

Sure it’s sexy — but it isn’t good citizenship. Nor is it good communications in the long run. People want a steady stream of reliable information, even if they know instinctively that it is biased — at least it is a bias they can trust. Honesty is better than nonsense in this way.

What is missing isn’t the right or wrong aspect of a question, but the sincerity of the people giving us the information. It’s what is missing from most communications handlers, to be very honest about it. We all know we are being misled; they know they are intentionally misleading the public. Worse still, the entire game is done without any pretense towards what the actual threat might be (inflation, Russia, COVID) but rather pure sophistry of whether it produces a short term advantage.

The result is layer upon layer of Frankfurtian bovine excrement:

It is impossible for someone to lie unless he thinks he knows the truth. Producing bullshit requires no such conviction. A person who lies is thereby responding to the truth, and he is to that extent respectful of it. When an honest man speaks, he says only what he believes to be true; and for the liar, it is correspondingly indispensable that he considers his statements to be false. For the bullshitter, however, all these bets are off: he is neither on the side of the true nor on the side of the false. His eye is not on the facts at all, as the eyes of the honest man and of the liar are, except insofar as they may be pertinent to his interest in getting away with what he says. He does not care whether the things he says describe reality correctly. He just picks them out, or makes them up, to suit his purpose.

For the White House to wish ill upon our fellow Americans during the Christmas holidays strikes me as one of the most pernicious telltales — not of Biden per se but of the people with whom he has chosen to surround himself. Not only is it manipulative and pure bullshit — it is insincere, craven and given the stakes utterly vicious and cruel.

Yet our media and its various handlers continue to manipulate the public. Like dutiful subjects, we gobble it all up because we love being lied to. And the PR folks know that bread and circuses have worked for a long time.

At least, until 100,000 Russians are parked along the Polish border after a one-week blitz through Eastern Europe, our hospitals are stacked due to Omicron, and inflationary pressures begin to devolve into Carter-era stagflation.

Reality has a funny way of barging into these obfuscations. Don’t worry — the press and the communications experts will be well fed either way.

By Shaun Kenney December 20, 2021 Rather than manipulate the public, why can’t our elected leaders treat us as adults capable of making our own decisions? Not a good start to the Christmas… er, I mean holiday… um… non-gender binary anti-patriarchal week of non-exclusionary trans-inclusive gathering season. First, Senator Joe Manchin puts the final nail in the…

By Shaun Kenney December 20, 2021 Rather than manipulate the public, why can’t our elected leaders treat us as adults capable of making our own decisions? Not a good start to the Christmas… er, I mean holiday… um… non-gender binary anti-patriarchal week of non-exclusionary trans-inclusive gathering season. First, Senator Joe Manchin puts the final nail in the…

Merrick Selected for VA Secretary of Commerce and Trade