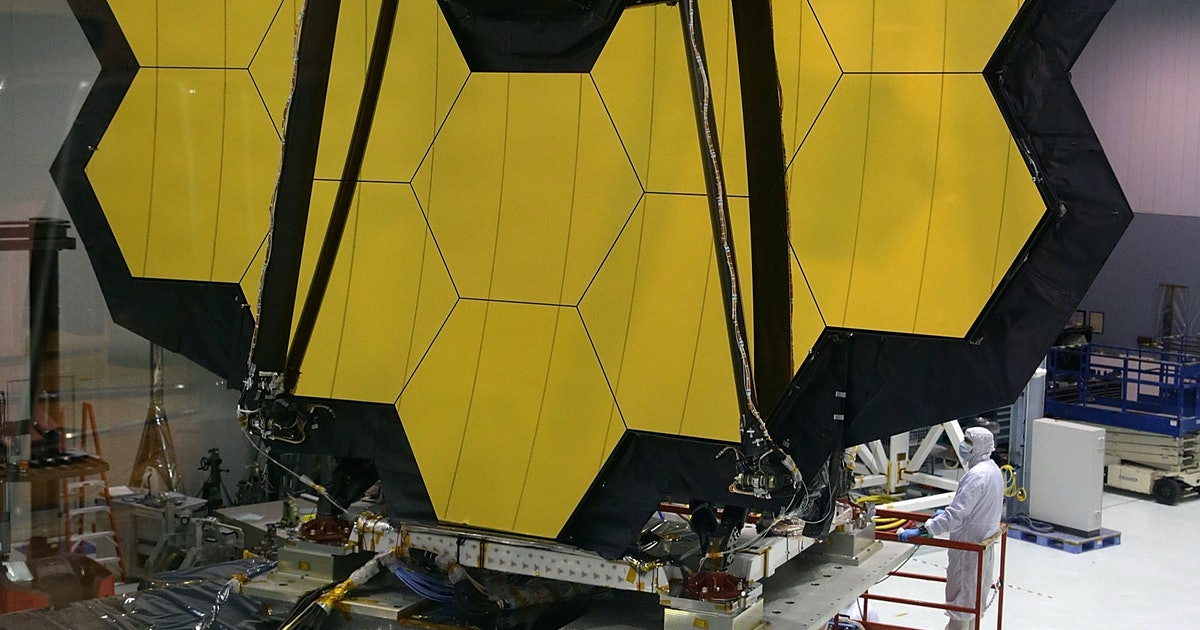 After a final review, the James Webb Space Telescope is delayed once more

Hours after confirming December 24 as the target launch date for the James Webb Space Telescope, the mission has once more been delayed until at the earliest December 25. The news came in the midst of writing this story — originally formulated as a report of Bill Nelson and Greg Robinson, the head of NASA and the agency’s lead on the James Webb, giving verbal assurances it would all go accordingly to plan at 2 p.m. Eastern. By 4:30 p.m. Eastern, the plans had changed.

“We had the launch readiness review this morning and I can say the observatory is in good health and ready to go,” Robinson said — before it all changed. Within hours of the briefing, NASA and the European Space Agency announced that due to weather, the long-awaited space telescope would launch on Christmas.

Why it matters — Perhaps it was too much to hope that a scientific instrument more than 20 years in the making would actually take flight on Christmas Eve like some sort of festive promise fulfilled, carried aloft atop an Ariane 5 rocket launched from French Guiana.

Once in space, Webb will make a million-mile journey to an orbital point that will allow it to peer into the deepest recesses of the cosmos. For scientists who have made Webb their careers and the many more who will build their name on Webb’s scientific discoveries, another day — or two — isn’t too much longer to wait.

When will we know more — Thankfully, Webb watchers will be put out their misery within a day, according to the mission’s statement/

“Tomorrow evening, local time in Kourou, another weather forecast will be issued in order to confirm the date of 25 December,” the statement says.

The latest delay is out of the space agencies’ control and probably a wise decision. There’s no room for error with the Webb, no backup telescope in a warehouse, and no chance of repairing it once it launches.

Best not to rush it — we will need to wait to see if the December 25 launch window holds in light of stormy weather in the region. NASA is confident it will launch — eventually.

“My stress level is generally low, and that is the case now,” Robinson said at Tuesday’s briefing. “It actually gets less as we get to the pad and we get into the count.”

Launch Ready?— NASA did confirm that Webb and its Ariane 5 rocket are ready to launch — the latest delay rests entirely with Mother Nature. That’s an encouraging sign, as there have been plenty of human-related delays Webb has had to contend with over the years.

Heading into 2021, NASA’s goal was to launch on Halloween, but that date also slipped to December 18. But having finally made it to the launch facility, issues with mating an adapter ring to Webb so it could be mounted on the rocket further rolled back the launch date to December 22.

“That got resolved pretty quickly with the help of all our partners,” Robinson explained.

On December 15, a communications problem led NASA to push the launch date to December 24.

On Tuesday, Robinson explained this was an issue with telemetry readings while Webb is on the ground, and while it’s not fully resolved, “that doesn’t affect us at all,” he says.

“We’ve run that out many times and that’s working just fine. So no issues once we leave the pad.”

NASA has good reason to be cautious. The James Webb Telescope has been in development for decades and costs more than $9 billion dollars. It’s irreplaceable and — once launched — irreparable, given its deep-space orbit. Everything must work right and work well, and NASA has taken every precaution, including shipping it to French Guiana on a secret ship to thwart any attempts at high seas space-telescope piracy.

What’s next?— NASA and ESA will keep an eye on the weather and confirm the December 25 launch date for Webb on Wednesday, December 22.

Once the launch is set in stone, NASA will stream the launch live on the space agency’s website, on NASA TV, and on the NASA Youtube channel.

Until then, Webb and its launch vehicle will wait out the weather safe in the final assembly building at the launch site. There may be a holiday miracle launch for this space telescope yet.

Hours after confirming December 24 as the target launch date for the James Webb Space Telescope, the mission has once more been delayed until at the earliest December 25. The news came in the midst of writing this story — originally formulated as a report of Bill Nelson and Greg Robinson, the head of NASA…

Hours after confirming December 24 as the target launch date for the James Webb Space Telescope, the mission has once more been delayed until at the earliest December 25. The news came in the midst of writing this story — originally formulated as a report of Bill Nelson and Greg Robinson, the head of NASA…