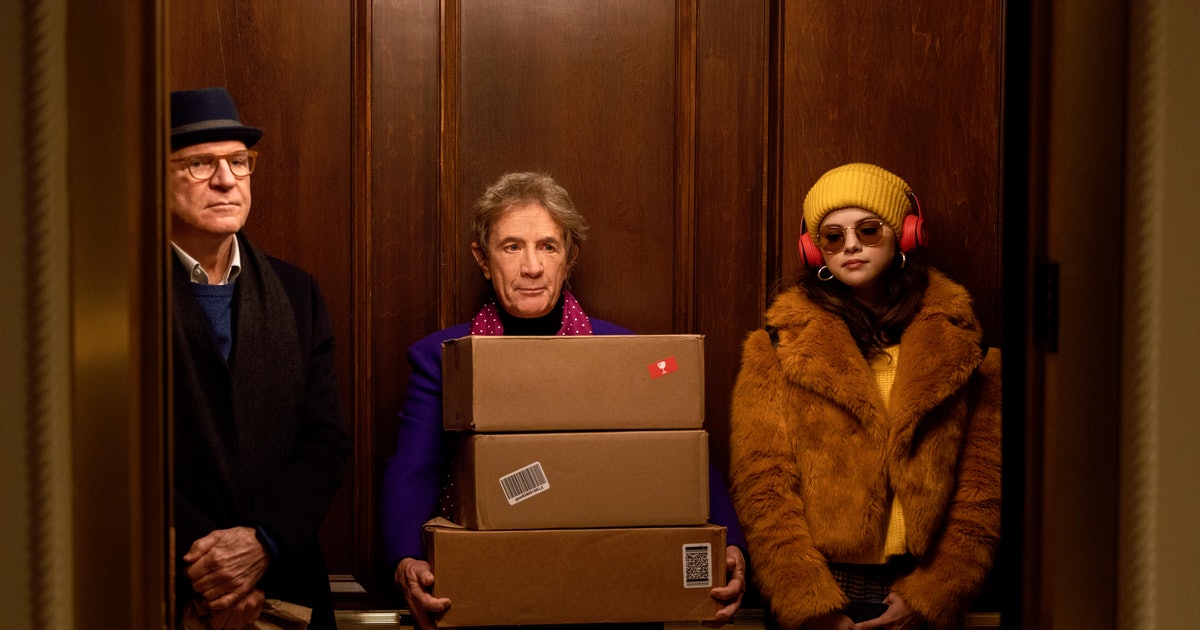 An unsuspecting boy lies on the floor of his father’s home in apartment 6B in New York City’s Arconia building. The sounds are muffled. His father, Teddy, beckons him, holding up a record.

“I wish you could hear this,” Teddy says, placing headphones on his son, Theo — a futile test if he can hear anything. Theo doesn’t respond as his dad raises the volume higher, signing in American Sign Language (ASL) and mouthing the lyrics with aggressive desperation as if he could make him hear by force. Teddy immediately regrets this, and apologizes to Theo profusely.

In a flash, Theo is now an adult, spying with binoculars on Only Murders in the Building’s detective trio Mabel (Selena Gomez), Charles (Steve Martin), and Oliver (Martin Short). He focuses on their mouths, lip-reading what they’re saying: Teddy is a suspect. When they disperse, Theo walks into the center of the frame. No longer on the periphery for this moment, he turns to face us — the audience. “People talk way too fucking much in this city,” Theo says, breaking the fourth wall.

SCENE STEALERS is a countdown that salutes the unforgettable small-screen characters of the year. Theo is #16.

With just one episode, Theo, played by deaf actor James Caverly, steals the show in Hulu’s Only Murders in the Building. Assuming Theo’s point of view for its runtime, the seventh episode of the murder mystery comedy puts a twist on a television trope, the “lower-deck” episode, and reaches new creative heights with how viewers can empathize with the disabled community through stories about them.

Caverly is a newcomer, his performance as Theo in Only Murders in the Building being his third on-screen role. The actor graduated with a degree in theater arts and worked with the National Theatre of the Deaf. On his website, Caverly takes issue with the usual portrayals of deaf people on the screen and on stage. “They’re [typically] the issue in the story that needs to be fixed,” Caverly says, “and frankly I’m just not feeling that that’s the lens that the world needs to see.”

Only Murders gives a deaf character control of the lens for a change. “The Boy from 6B” is an example of a “lower-deck” episode – an episode that sees the story from a minor character’s angle. These episodes offer a new perspective on the central plot, and in the case of Only Murders, peels back layers to get to the root of its mystery.

What sets “The Boy from 6B” apart is how it commits to Theo’s vantage point, visually and aurally. The episode only has one line of spoken dialogue (at the very end). Everything else is muted to resemble the deep humming of inner ears. The episode translates subtitled dialogue through Theo’s lip-reading, text message graphics, and even a Scrabble board.

As a deaf man in a world where people talk “too fucking much,” Theo often feels like he’s in the periphery, overshadowed by his father widely known as “The Deli King” (played by larger-than-life actor Nathan Lane). Yet, this episode makes him central to the mystery, revealing his role in another murder years ago at the Arconia. That murder set off the series of events that leads to the crime the show’s protagonists investigate for their podcast.

“Intensity, guardedness, and vulnerability can be felt through his piercing stare”

Theo’s involvement is where Caverly shines. His intensity, guardedness, and vulnerability can be felt through his piercing stare, the movement of his hands as he signs in ASL, and his body wracking in sobs after accidentally pushing a teenage girl, Zoe (Olivia Reis), off the Arconia’s roof in a pivotal flashback. The writers and director Cherien Dabis amplify Caverly’s performance by accompanying sound effects and close-ups. When Zoe laughs off Theo, you can hear just how piercing her mean guffaw is.

While Theo is a scene-stealer in his own right, he is far from a good person. He allows his dad to cover up the murder and Zoe’s boyfriend, Oscar (Aaron Dominguez) to take the fall and go to jail. Because Theo is so guarded, it’s hard to know if he feels any remorse about his actions. But what we do know is that he definitely doesn’t want anyone to uncover his secret and the undercover jewelry business that Teddy runs with Theo’s help. I can imagine a spin-off where we see him and the two steal jewels from the dead. That could be a fun watch with Caverly’s dramatic chops and Lane’s effusive charisma.

Theo and Caverly’s performance proves more shows should prominently feature deaf characters. Its visual and aural choices feel less like a gimmick and are organic to the story at hand. “The Boy from 6B” ascends TV tropes to show Theo’s story as an essential piece of the puzzle. Unfolding the narrative through his perspective shows the value of diverse stories in inclusive and creative ways. After all, losing one sense only makes our other senses stronger.

Only Murders in the Building is streaming now on Hulu.

An unsuspecting boy lies on the floor of his father’s home in apartment 6B in New York City’s Arconia building. The sounds are muffled. His father, Teddy, beckons him, holding up a record. “I wish you could hear this,” Teddy says, placing headphones on his son, Theo — a futile test if he can hear…

An unsuspecting boy lies on the floor of his father’s home in apartment 6B in New York City’s Arconia building. The sounds are muffled. His father, Teddy, beckons him, holding up a record. “I wish you could hear this,” Teddy says, placing headphones on his son, Theo — a futile test if he can hear…

Behold! The James Webb Space Telescope is ready to launch