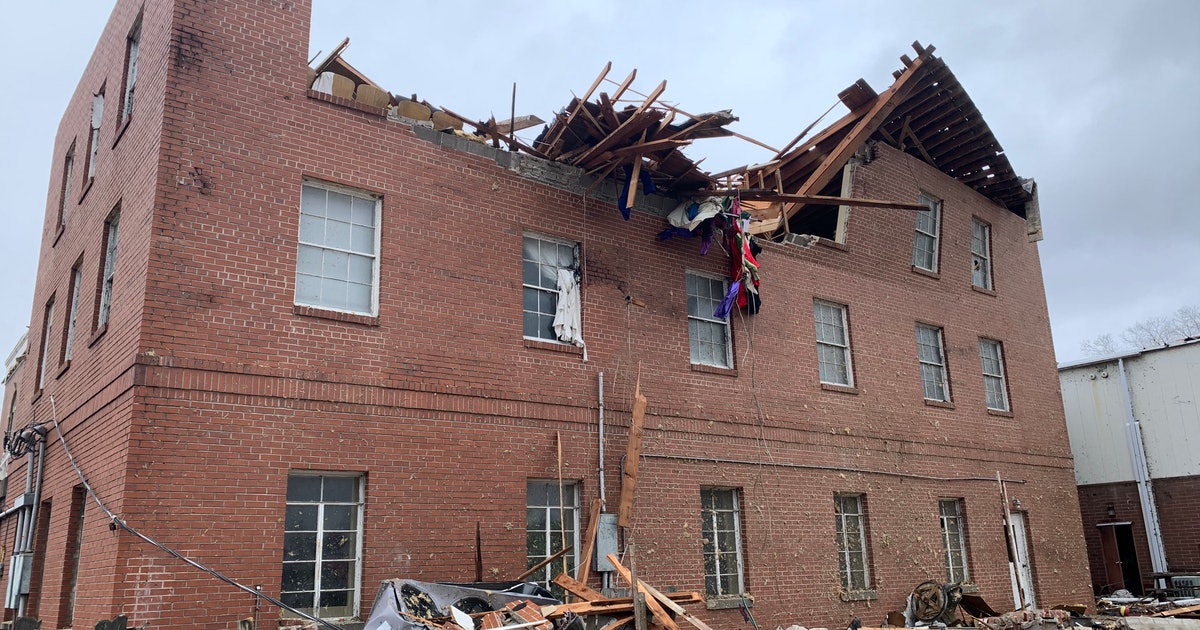 On the night of December 10, 2021, an outbreak of powerful tornadoes tore through parts of Arkansas, Mississippi, Missouri, Kentucky, Tennessee, and Illinois, killing dozens of people and leaving wreckage over hundreds of miles.

Hazard climatologists Alisa Hass and Kelsey Ellis explain the conditions that generated this event — including what may be the first “quad-state tornado” in the U.S. — and why the Southeast is vulnerable to these disasters year-round, especially at night.

What caused the huge tornado outbreak?

On December 10, a powerful storm system approached the central U.S. from the west. While the system brought heavy snow and slick conditions to the colder West and northern Midwest, the South was enjoying near-record breaking warmth, courtesy of warm, moist air flowing north from the Gulf of Mexico.

The storm system ushered in cold, dense air to the region, which interacted with the warm air, creating unstable atmospheric conditions. When warm and cold air masses collide, less dense warm air rises upward into cooler levels of the atmosphere. As this warm air cools, the moisture that it contains condenses into clouds and can form storms.

When this instability combines with significant wind shear — winds shifting in direction and speed at different heights in the atmosphere — it can create an ideal setup for strong rotating storms to occur.

Atmospheric instability develops when air is warm at the surface and cold at higher levels. This causes parcels of warm air to rise and form clouds that can produce thunderstorms and, in some conditions, tornadoes.

How intense was this tornado?

At least 38 tornadoes have been reported in six states during this outbreak, causing widespread power outages, damage, and fatalities. The National Weather Service rates tornadoes based on the intensity of damage using 28 damage indicators from the Enhanced Fujita, or EF, scale. Storm assessments and tornado ratings can take several days or longer to complete.

Most tornadoes stay on the ground for a short amount of time and travel short distances — 3-4 miles on average. Long-track and very long-track tornadoes — those that travel at least 25 and 100 miles respectively — are relatively uncommon. They account for less than 1 percent of all tornadoes in the United States.

Long-track tornadoes require a very specific set of ingredients that must exist across a wide area. These uncommon tornadoes form from a single supercell storm — a storm with a rotating updraft called a mesocyclone — that can persist for hours.

The previous record for an along-track tornado was from 1925 when the F-5 Tri-State Tornado traveled 219 miles through Missouri, Illinois, and Indiana. The “Quad-State Tornado,” as this tornado has been nicknamed, is expected to break that record.

In the coming days, the National Weather Service will confirm whether one tornado stayed on the ground for more than 200 miles or multiple tornadoes resulted from the same storm. The agency has issued a preliminary rating of EF-3 or greater for this event.

Is the Southeast at greater risk than other places?

Spring is typically considered tornado season, but tornadoes can occur at any time throughout the year. The Southeast experiences a second peak in tornadic activity in the fall and early winter, and winter tornadoes are not uncommon.

Similarly, tornadoes can happen at any time of the day. Nighttime tornado events are especially common in the Southeast, where the ingredients for storms are different and more conducive to nocturnal tornadoes than in “Tornado Alley” in the Great Plains.

Tornadic storms in the Southeast are often powered by an abundance of wind shear. They do not rely as heavily on rising warm, humid air that creates atmospheric instability — conditions that require daytime heating of the earth’s surface and are more prevalent in the spring.

But nighttime tornadoes can be especially deadly. More fatalities tend to occur because people often don’t receive warning communications when they are sleeping. Storm spotting is more difficult in the dark, and people are more likely to be in more vulnerable housing, such as mobile homes, at night than during the day when they are at work in sturdier buildings.

Having multiple reliable methods for receiving warnings at night is critical since power can go out and cellphone service can go down during severe weather. Unfortunately, during the Dec. 10-11 event, some people who went to shelters were killed when tornadoes struck the building they were in. But timely warnings that allow people to shelter safely in a solid structure tied to a foundation or basement can mean survival during less-devastating events.

This article was originally published on The Conversation by Alisa Hass and Kelsey Ellis at the University of Tennessee, and Middle Tennessee State University. Read the original article here.

On the night of December 10, 2021, an outbreak of powerful tornadoes tore through parts of Arkansas, Mississippi, Missouri, Kentucky, Tennessee, and Illinois, killing dozens of people and leaving wreckage over hundreds of miles. Hazard climatologists Alisa Hass and Kelsey Ellis explain the conditions that generated this event — including what may be the first…

On the night of December 10, 2021, an outbreak of powerful tornadoes tore through parts of Arkansas, Mississippi, Missouri, Kentucky, Tennessee, and Illinois, killing dozens of people and leaving wreckage over hundreds of miles. Hazard climatologists Alisa Hass and Kelsey Ellis explain the conditions that generated this event — including what may be the first…