Sunday Newfeed: Those Little Specks of Unidentifiable Whatnots You Bite into Even When You’ve Watched the Sausage Being Made

Posted by Maggie on December 19, 2021 in From the editors 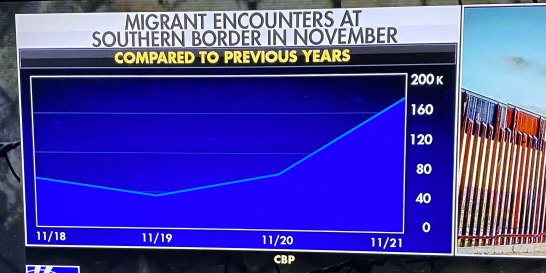 “It’s truly unbelievable, and people who live along that border who live in Arizona, Texas, and California they’ll tell you they’re feeling the consequences of what I’m calling a mass crime scene. It is a crime to cross our border. Frankly our government is enabling it. Our government is partnering with the cartels in human trafficking and the trafficking of human children that many of them end up trafficked sexually as well. Our government is complicit in this last leg of the journey for the cartels by taking our tax dollars and flying the people … who have no regard for our laws … and flying them wherever they want to go in the country. And that’s why Gov. Abbott has said ‘enough were sick of waiting for the federal government to do something … we know they have no intention of Doug it, and so, we’re going to take this into our own hands period’…” – Rachel Campos-Duffy, FOX and Friends Weekend

Speaking from the hard-hit area of the Rio Grande Valley, Abbott said “the consequences of Biden’s failure to do his job are staggering.” Already in 2021, more than 1.2 million people have been apprehended coming illegally across the border. Illegal immigrants “are coming not just from Mexico but through Mexico from more than 150 countries across the entire globe — including countries who are hostile to the United States of America” such as China, Iran, Syria, and Russia.

“The Biden Administration is not doing enough to respond to” these illegal activities, Abbott said. Not only do illegal immigrants come through our borders, but trafficking victims, narcotics, and firearms are brought in as well. Enormous amounts of the deadly drug fentanyl continue to pour across the border. Agents have recovered enough fentanyl “to kill every man, woman, and child in Texas, California, New York, Illinois, and Florida combined.”…

NEW: Texas Governor @GregAbbott_TX officially announces the beginning of construction of the Texas border wall here in the Rio Grande Valley. It’s the first time in the history of the country a state has built its own border wall. A Texas flag flies atop the crane. @FoxNews pic.twitter.com/lTcqzr3Zez

EXCLUSIVE — A Border Patrol agent who resigned this week said the mission of the organization has become “unrecognizable” as federal law enforcement have been turned into “handmaids,” according to a leaked copy of a letter sent to the chief.

The agent of more than a decade, Mustafa Joseph, told Border Patrol Chief Raul Ortiz in an email sent on Monday that he could no longer do the job he signed up to do… 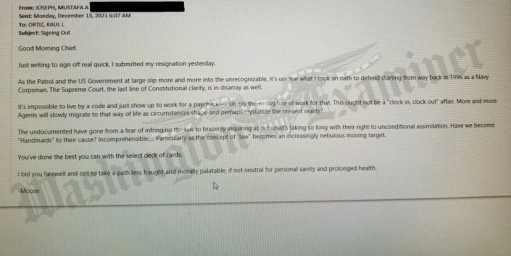 Joseph did not call out the Biden administration by name but said the “present reality” was changing the nature of the job. Unlawful entries between ports of entry rose during 2020 and hit six digits shortly after Joe Biden took office and hit 200,000 per month over this past summer.

The surge in migrants, including far more from countries beyond Central America than at any time in the Border Patrol’s history, has been attributed to Biden’s rescinding of deterrence mechanisms that the Trump administration imposed as well as fallout from the coronavirus pandemic that has prompted many to leave their home countries in search of safety and opportunity.

As a result of the influx of people, roughly half of the 19,000 Border Patrol agents have been pulled from the field to process, transport, and care for those in federal custody, many of whom will be released into the United States without first being entered into the U.S. immigration court system. Half a million people were released into the U.S. in fiscal year 2021, which ended in September, according to the Department of Homeland Security… 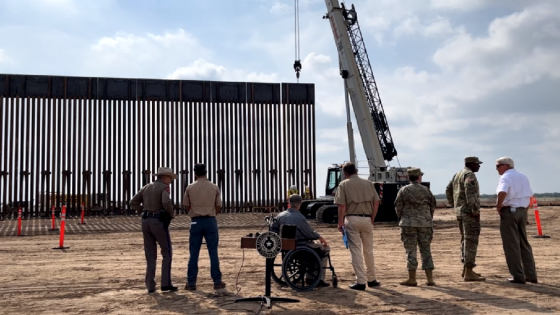 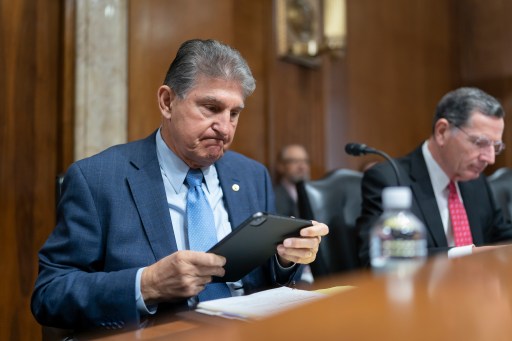 Hopefully Sen. Manchin sticks by his guns and plows through any further pressuring and bullying by Pelosi, Schumer and the rest of the demo-commie party…

“I cannot vote to continue with this piece of legislation.” — Sen. Joe Manchin (D-WV) says President Biden’s Build Back Better plan “is a no.”

“I’ve tried everything humanly possible. I can’t get there.” pic.twitter.com/HsgXgYms3e

Ronn Blitzer: Manchin says he ‘cannot vote’ for Build Back Better: ‘I’ve done everything humanly possible’: ‘I cannot vote to continue with this piece of legislation,’ he said

Hey, Joe, come on over to our side of the aisle. We’ll take a RINO with right-sided convictions. CNN and the AP, and the dems/left, already hate you, buddy…

A single senator is about to seriously set back an entire presidential agenda. https://t.co/0pvzruT6mV

Funny how you guys didn’t seem to mind this political reality when John McCain cast the tiebreaking vote to save Obamacare.

GP No one should ever forget media cheering on + practically anointing Sen. McCain the messiah for crossing his party to cast the deciding vote to retain the ACA as we witness media currently berating + smearing Sen. Manchin for crossing Democrats and tanking Democrats’ BBB Act.

Gotta give ABC News credit. They managed to squeeze two lies into that short headline. pic.twitter.com/QIGUlHWem1 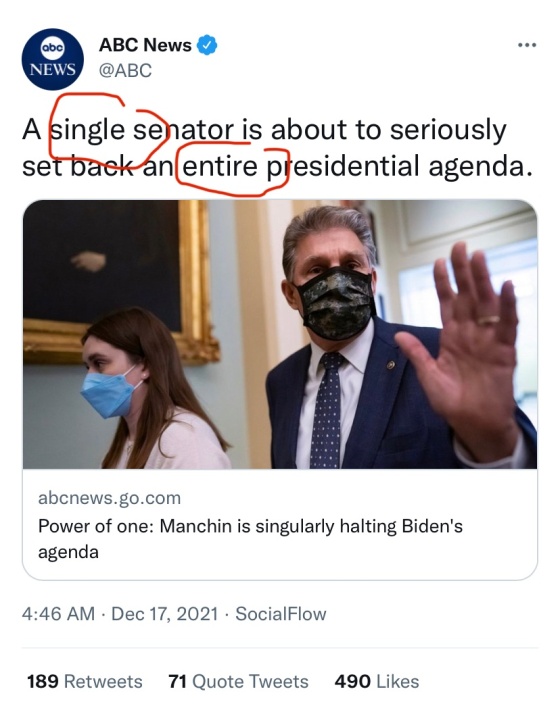 AP @ ABC News: Power of one: Manchin is singularly halting Biden’s agenda: Despite months of being courted and cajoled, Sen. Joe Manchin is still not a yes on President Joe Biden’s big $2 trillion domestic package

MSM doesn’t recognize/declare something as “bipartisan” when it involves a dem voting with the GOP.

Twitchy: ‘NO on this legislation’: Joe Manchin pulls the PLUG on Biden’s Build Back Better on Fox News Sunday and cue the Lefty MELTDOOOWN (watch)

Twitchy: OOF! Now that Joe Manchin has NUKED Biden’s Build Back Better, Nancy Pelosi’s statement about Biden ‘being in charge’ is even FUNNIER

Sure Biden’s entire domestic agenda is dead but at least the virus isn’t shutdown and more mandates and lockdowns are coming.

If Manchin is no on both BBB and voting, Biden is done. Democracy is hanging by a thread. Hard to think of anyone more destructive

She says that like it’s a bad thing. https://t.co/IBJZc8osTJ

Rep. @AyannaPressley on Manchin: “He has never negotiated in good faith and he is obstructing the president’s agenda. […] All I want for Christmas is a senator that has compassion for the American people and not contempt.” https://t.co/ySPjJY4MAr pic.twitter.com/LQFTgugcGF

All I want for Christmas are Senators who understand their purpose in government and stop pretending they are an elite holy priesthood that can never be questioned. 🙄 https://t.co/zksdwUmfCa

Both houses’ occupants aren’t serving their purpose as Founding Fathers intended. They weren’t to use their position(s) as fulltime career/job. They were meant to work at real jobs like the rest of us under legislation/policies they inflict on us. They only pretend to reprsnt us.

Let’s be clear: Manchin’s excuse is bullshit. The people of West Virginia would directly benefit from childcare, pre-Medicare expansion, and long term care, just like Minnesotans.

This is exactly what we warned would happen if we separated Build Back Better from infrastructure. https://t.co/dhzcSk0qUV

She kisses her brother with that mouth? https://t.co/jAaZCDIYy9

Let’s be clear: Inflation is already out of control. Printing and taxing another $2 to $3 trillion would’ve made matters even worse for the people of West Virginia as well as every other state.

A Somali migrant who reps in Minnesota trying to tell West Virginians what to think.

When a handful of us in the House warned this would happen if Dem leaders gave Manchin everything he wanted 1st by moving BIF before BBB instead of passing together, many ridiculed our position.

Maybe they’ll believe us next time. Or maybe people will just keep calling us naïve. https://t.co/TtKW6VOOCF

Watch out, the Communist faction of the Democrats are grumpy today. pic.twitter.com/SqwRm6eJ59 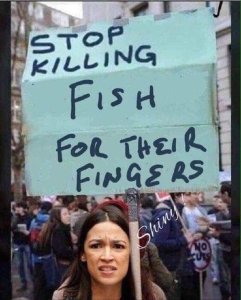 It *shouldn’t* be easy for Congress to spend nearly $2 trillion.

I am glad that for once it wasn’t.

Posted by Maggie on December 19, 2021 in From the editors *CRUNCH*… Biden’s Illegal Immigration Hockey Stick Graph: “It’s truly unbelievable, and people who live along that border who live in Arizona, Texas, and California they’ll tell you they’re feeling the consequences of what I’m calling a mass crime scene. It is a crime to cross our border. Frankly our government is…

Posted by Maggie on December 19, 2021 in From the editors *CRUNCH*… Biden’s Illegal Immigration Hockey Stick Graph: “It’s truly unbelievable, and people who live along that border who live in Arizona, Texas, and California they’ll tell you they’re feeling the consequences of what I’m calling a mass crime scene. It is a crime to cross our border. Frankly our government is…

GOP Fights and Wins Battles to Protect Our Troops