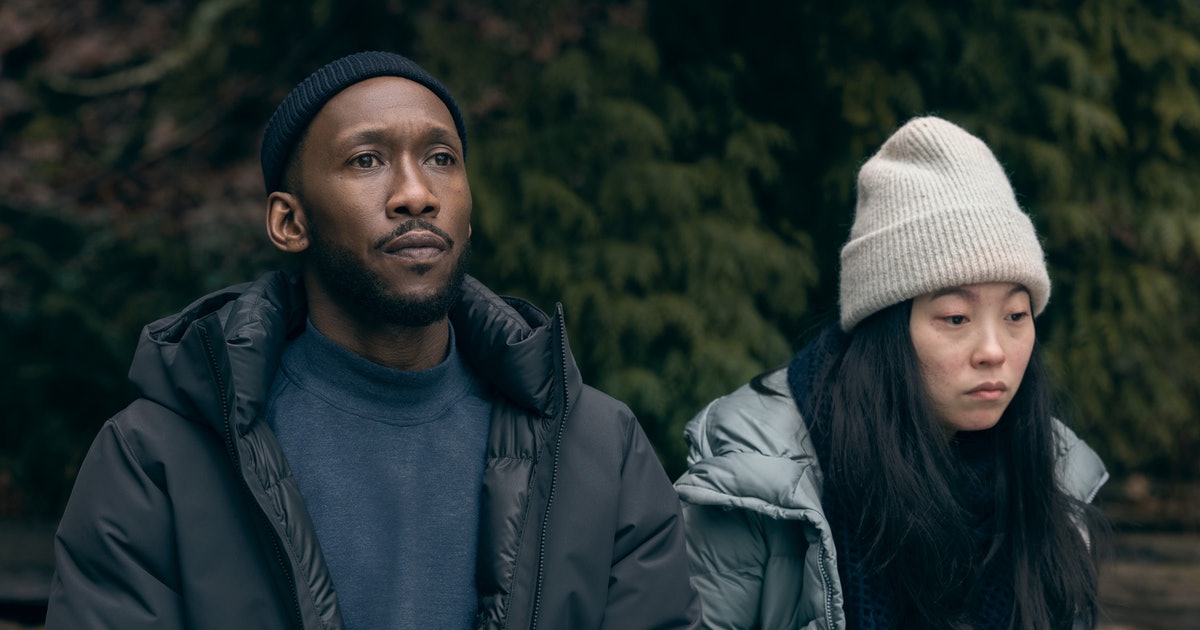 Swan Song begins, like so many of cinema’s great love stories, on a train.

Two strangers, Cameron (Mahershala Ali) and Poppy (Naomie Harris), find themselves sitting across from each other, and quickly engage in a delightfully flirtatious, if silent, exchange. It’s later revealed that the whole interaction stems from a complete misunderstanding, but the pleasure that radiates from Ali and Harris’ smiling faces lingers long after the sequence comes to an end.

The scene accomplishes what all great movie meet-cutes must. It makes you fall in love with Cameron and Poppy at the same time they’re falling for each other. There’s just one catch to the whole scene: it’s a memory, an event that unfolded years before the start of Swan Song.

Cameron, it turns out, is replaying the moment as part of a medical procedure that will test his love for both Poppy and their son Cory (Dax Rey) in ways he can’t even begin to imagine. What follows is a visually gorgeous meditation on death that also confirms, once and for all, Mahershala Ali’s status as one of the world’s greatest actors.

Written and directed by Benjamin Cleary, Swan Song begins with Ali’s Cameron facing a difficult decision. Diagnosed with a terminal illness, Cameron has to either come clean and tell his family about his fate or hide it from them and be replaced by a clone without their knowledge. Equipped with all of his memories, the clone will be indistinguishable from his real self and, hopefully, spare Poppy and Cory the grief of his death.

It’s an unenviable position for Cameron to be put in, one that raises a number of interesting ethical and moral questions that Swan Song, unfortunately, doesn’t confront as deeply as it could. Instead, the film roots itself firmly in Cameron’s perspective, following him as he struggles between feeling like it’s a betrayal to leave his wife and son with his clone and believing that doing so would be an act of mercy.

Swan Song, notably, doesn’t waste much time before stacking the cards against Cameron. Not only is it revealed that Poppy is still reeling from the loss of her twin brother, but we also learn early on that she and Cameron are expecting a child who will be born several months after his death. The latter revelation makes it clear very quickly that Swan Song isn’t concerned with whether or not Cameron should go through with the medical procedure, but rather, if he can emotionally separate himself enough to do it.

If Swan Song doesn’t interrogate its Black Mirror-esque sci-fi premise quite as vigorously as some viewers might hope, the film does succeed in telling an emotionally palpable story. That’s largely thanks to two things: the stunning cinematography by Masanobu Takayanagi and the heart-wrenching performances given by the film’s cast members — particularly Mahershala Ali.

The film was shot in and around Vancouver, Canada, and Takayanagi makes the most of its locations, highlighting the mountains, forests, and lakes that surround the medical facility where Cameron helps complete the creation of his clone. These environments give the film an expansiveness that rises above its small scale and budget. The sets, designed by Annie Beauchamp, also bring a visual tranquility and openness to Swan Song that further elevates its meditative tone and pace.

Takayanagi and Beauchamp’s contributions make the film one of the year’s most visually appealing indie sci-fi titles, but if there’s one reason to see Swan Song: Mahershala Ali.

Playing both Cameron and his clone (who is referred to as “Jack”), Ali’s performances bring different shades of yearning, grief, and desperation to Swan Song. The actor imbues Jack with a surprisingly inquisitive, eager quality emphasizing the clone’s desire to do his job and keep Cameron’s family together. Conversely, his quiet, devastating performance as Cameron makes the character’s struggle to say goodbye to his family heartbreakingly clear.

Outside of Ali, Awkwafina brings some much-needed levity to Swan Song as a sarcastic woman who has already gone through with the very procedure. Glenn Close also turns in a reliably confident performance in the largely thankless role of Dr. Jo Scott, the woman behind the film’s revolutionary medical experiment, and Naomie Harris’ on-screen chemistry with Ali helps ensure that Swan Song’s narrative succeeds on a purely emotional level.

Thankfully, while the film doesn’t truly investigate the real-world complications of its premise, it works exceedingly well as a meditation on the nature of love and the emotional brutality of grief. Cameron, in his attempt to spare his family the pain of his death, is forced to grieve the loss of them in a manner that highlights the way in which grief can be a two-way street, one that flows from the person leaving to those who are left behind.

Fortunately, Swan Song’s final note, though morally dubious in a few ways, manages to bring its exploration of loss all the way back around to the love at the center of its story. The film’s conclusion ensures that Swan Song goes out on a moment of such profound emotional generosity that most viewers will likely finish it with tears streaming down their cheeks, reminded again of how there’s no better gift in the world than to be told, honestly and truly, that are you loved by the very person you want to love you.

Swan Song is playing in select theaters and streaming now on Apple TV+.

Swan Song begins, like so many of cinema’s great love stories, on a train. Two strangers, Cameron (Mahershala Ali) and Poppy (Naomie Harris), find themselves sitting across from each other, and quickly engage in a delightfully flirtatious, if silent, exchange. It’s later revealed that the whole interaction stems from a complete misunderstanding, but the pleasure…

Swan Song begins, like so many of cinema’s great love stories, on a train. Two strangers, Cameron (Mahershala Ali) and Poppy (Naomie Harris), find themselves sitting across from each other, and quickly engage in a delightfully flirtatious, if silent, exchange. It’s later revealed that the whole interaction stems from a complete misunderstanding, but the pleasure…

Kingpin’s next big role after ‘Hawkeye’ has already been revealed