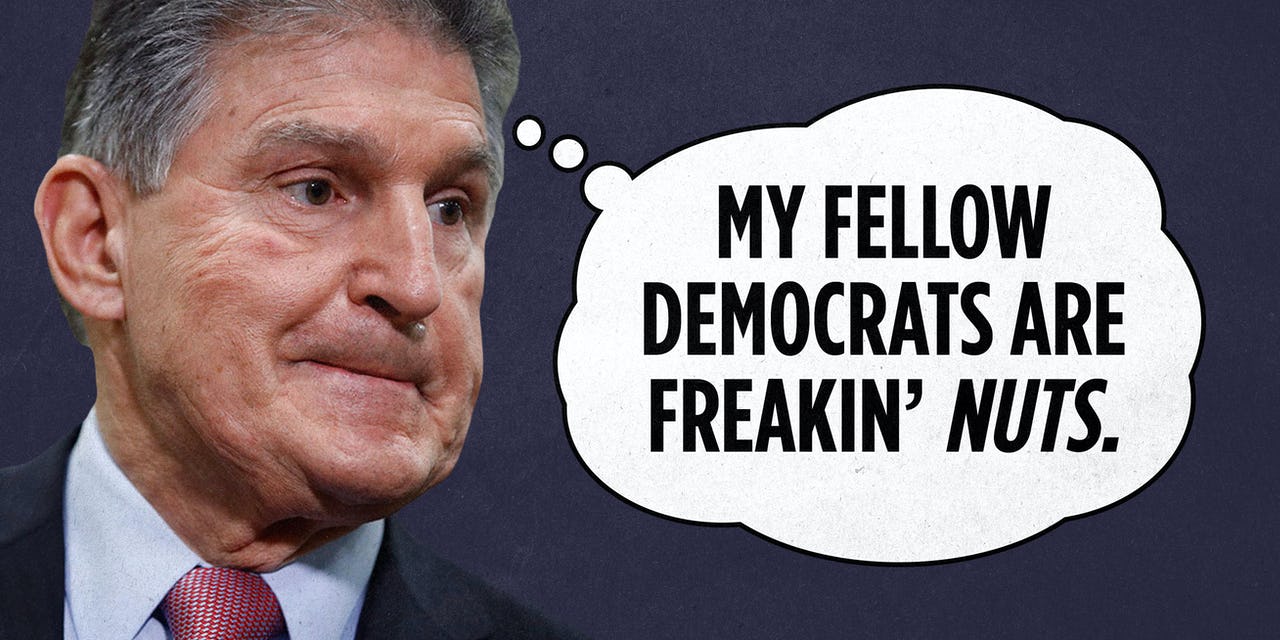 By DOUGLAS ANDREWS December 17, 2021 in Government

Every day we wake up with Joe Biden’s ruinous Bilk Back Badder boondoggle still languishing in the Senate, we say a little prayer for West Virginia Senator Joe Manchin. (We know, we know, he’s a Democrat. But he’s our Democrat.)

Joe Manchin is a politician, sure. And a darn good one. How else could a Democrat get elected in a state that went for Donald Trump over Joe Biden by 39 points? Indeed, Manchin knows from whence he came, and he can read a political opinion poll — like this one, or this one, or this one. Manchin knows Joe Biden is a loser; that he’s the lame-duckiest first-year president in our nation’s history, and that his policies — from spending to the economy to energy to race to crime to defense to open borders — are utterly at odds with the people of his state.

And perhaps more important: Manchin knows that one day he’ll leave the Beltway and head back home to West Virginia for good, there to live out his retirement years and occasionally show his face in public. This is nothing new. Indeed, it’s a reality as old as the Republic. “It is a sound and important principle,” said James Madison in Federalist No. 56, “that the representative ought to be acquainted with the interests and circumstances of his constituents.”

Here, then, is the good news, as reported by the editorial board of The Wall Street Journal: “Democrats are getting anxious as 2021 nears its end and President Biden’s $5 trillion spending bill lacks the votes to pass. The target of grumbling from anonymous sources, which may soon become rage, is West Virginia Sen. Joe Manchin, who remains a holdout. But the fault here lies with Democratic leaders who misjudged Mr. Manchin as well as the political and policy moment.”

That misjudgment refers to Manchin having set a ceiling of $1.75 trillion for Biden’s bill, and to his fellow Democrats’ belief that Manchin would, when push came to shove, jump in and join the spending orgy. That hasn’t happened. And it hasn’t happened because the Biden administration played fast and loose with (read: lied about) the numbers. As our Thomas Gallatin wrote on Monday, “After factoring in the Republicans’ request to remove all the Democrats’ timeline gimmicks, the CBO concluded that BBB would add nearly $3 trillion to the national debt over a decade — nearly 10 times the $367 billion that the CBO initially calculated.”

We can imagine the thoughts inside Manchin’s head: These spendaholics are freakin’ nuts. And they must think I’m an idiot.

We don’t think Manchin is an idiot. Far from it. At times, we’ll admit, we’ve figured him for a typical politician and a shameless opportunist. But we repeat ourselves. Regarding Manchin, this much is inarguable: He’s given the Biden administration more heartburn than any other senator, Democrat or Republican. Whereas Ted Cruz and Josh Hawley are supposed to denounce Joe Biden and vote against the entirety of his agenda, Manchin has given this administration one unexpected Maalox moment after another.

In just the past couple of weeks, for example, he’s singlehandedly blocked Build Back Better, he’s voted against Biden’s vaccination fetishism, and he’s called out the administration’s idiotic energy policies. Said Manchin just before Thanksgiving: “I continue to call on President Biden to responsibly increase energy production here at home and to reverse course to allow the Keystone XL pipeline to be built, which would have provided our country with up to 900,000 barrels of oil per day from Canada, one of our closest allies.”

Build Back Better isn’t dead yet. Far from it. And if we’re to one day give this lone senator credit for having killed it, he’ll have to hold firm and take the slings and arrows from his fellow Democrats — at least until a Republican Congress can take the reins.

In the meantime, two cheers for Joe Manchin.

By DOUGLAS ANDREWS December 17, 2021 in Government The West Virginia Democrat has repeatedly frustrated the fiscally reckless Biden administration. Every day we wake up with Joe Biden’s ruinous Bilk Back Badder boondoggle still languishing in the Senate, we say a little prayer for West Virginia Senator Joe Manchin. (We know, we know, he’s a…

By DOUGLAS ANDREWS December 17, 2021 in Government The West Virginia Democrat has repeatedly frustrated the fiscally reckless Biden administration. Every day we wake up with Joe Biden’s ruinous Bilk Back Badder boondoggle still languishing in the Senate, we say a little prayer for West Virginia Senator Joe Manchin. (We know, we know, he’s a…

Get Rid of the Debt Ceiling